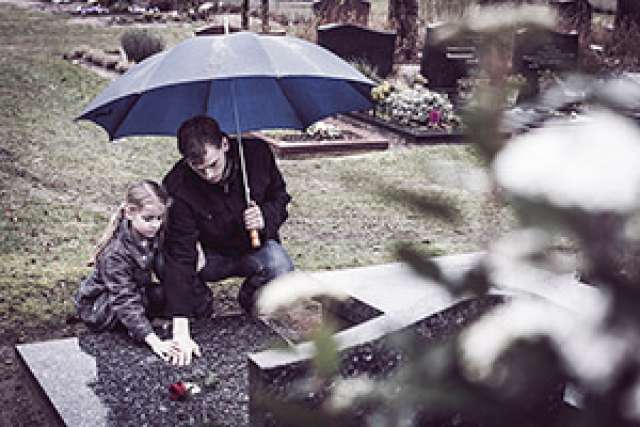 Everybody grieves the death of a loved one, and the process helps most mourners adjust to their loss.

“Charlie Brown was right,” said Christopher Layne, a psychologist and researcher at the Semel Institute for Neuroscience and Human Behavior at UCLA. “There is good grief.”

“It’s difficult to think about a future career or who you’re going to be if you don’t see yourself having a good life without the deceased,” said Layne, who is a program director at the UCLA/Duke National Center for Child Traumatic Stress.

To help identify children and adolescents with the disorder, Layne joined with Julie Kaplow, a clinical child psychologist at the University of Texas Houston to develop an assessment tool for bereaved youth.

With 39 straight-forward questions and an easily intelligible rating system, the “Persistent Complex Bereavement Disorder Checklist — Youth Version” is the first assessment tool of its kind. The UCLA-University of Texas psychological test aims not only to help identify kids and teens whose grief may have taken a wrong turn but also attempts to gauge the severity of their symptoms. Authors hope that educators, mental health providers, pediatricians, hospice providers and grief support communities will use the checklist.

“For children and adults, having an age-appropriate checklist to assess symptoms is a critical first step in identifying bereaved youth who may need specialized support,” said Kaplow, an associate professor of psychiatry and behavioral sciences at the University of Texas Health Sciences Center at Houston and director of its Trauma and Grief Center for Youth.

Hallmarks of maladaptive grief include trouble accepting the death, emotional numbness, bitterness or anger and excessive efforts to avoid reminders of the loss. Sufferers may long to die in order to be with the deceased, feel alone or detached from others or feel that life is empty or meaningless, Layne said.

Complicating matters, individuals with the bereavement disorder are at risk for a host of other psychiatric disorders, including depression, post-traumatic stress and substance abuse. And those disorders can mask maladaptive grief, reducing the likelihood that sufferers will be diagnosed and routed to proper care, Layne said.

But until now the only assessment instruments for maladaptive grief have been designed for adults, primarily elderly adults — mostly widows.

Written with language more easily understood by bereaved youth from 8 to 18, the new test is designed to detect symptoms that can differ from those found in adults.

Where assessment tools designed for adults look for symptoms of at least one year in duration, the youth version is designed to sends up red flags when symptoms persist for just six months.

“One year is simply too long a period of time for a child to suffer because of the risk for lost developmental opportunities,” Layne said.

“Children can be crying and grieving over the death of their mom or dad and then two minutes later be running around and laughing and playing with their friends,” said Layne, who is the director of education in evidence-based practice at UCLA/Duke National Center for Child Traumatic Stress.  “Adults might incorrectly assume that the problem is something children are able to shrug off because they are not despondent for days on end like you might expect with an adult.”

The assessment tool comes at a time of increasing interest in Persistent Complex Bereavement Disorder. The disorder was added as a proposed diagnosis to the latest issue of the American Psychiatric Association’s Diagnostic and Statistical Manual of Mental Disorders, which offers a common language and standard criteria for the classification of mental disorders. Checklist users can opt to participate in a data collection process that is part of ongoing research that may lead to the disorder’s full adoption or further refinement in a future issue of the manual.

The checklist’s third author is Robert Pynoos, a UCLA professor in residence of psychiatry and author of the world’s most widely used assessment tool for post-traumatic stress disorder in school-aged children and adolescents.

For the new assessment tool, Layne, Kaplow and Pynoos used interview and assessment data from more than 230 bereaved children and adolescents. The authors also convened a panel of 10 internationally recognized grief experts who reviewed and rated each item according to its developmental appropriateness and relevance for assessing childhood grief. The resulting psychological test takes between five and eight minutes to complete.

A treatment plan can then be individually tailored according to the child’s specific needs, strengths and life circumstances. Treatment often includes helping the child identify personal loss reminders, develop coping skills to manage grief reactions, put into words thoughts or feelings that they have not been able to express and find comforting ways to feel connected to the deceased while accepting the reality of the loss.

“What has been inspiring to us,” said Kaplow, “is that children often react to the test by saying, ‘So other kids feel this way, too? I thought it was just me.’”