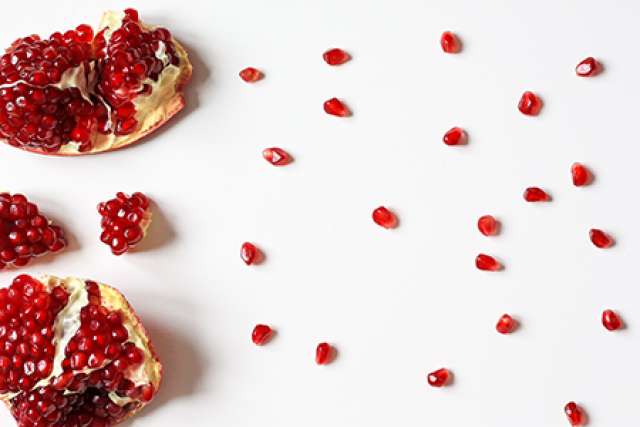 FINDINGS
UCLA researchers found that the oral consumption of pomegranate juice and extract reduced the risk of UVB radiation, which can lead to skin damage.

BACKGROUND
Ultraviolet (UV) radiation is a major factor for skin diseases including skin redness, burn, inflammation, degenerative age-related changes and skin cancer. Unprotected exposure to ultraviolet radiation damages the DNA in skin cells and can cause eye damage, including cataracts and eyelid cancers. UVA and UVB rays are the two main types of radiation that increase the risk for skin diseases, and play a role in causing skin cancers. UVA rays penetrate the deep layers of skin, damaging the collagen and elastin in the skin, which are associated with skin aging and wrinkles. UVB rays penetrate and damage the outer layers of skin, which are responsible for sunburn. According to the Skin Cancer Foundation, more than 5 million people are diagnosed with non-melanoma skin cancer each year and an estimated 192,310 new cases will be diagnosed in the United States in 2019. According to the American Academy of Dermatology, more than 1 million people are currently living with melanoma.

METHOD
In a randomized, controlled trial, 74 female participants were divided into three groups. On a daily basis for 12 weeks, one group received eight ounces of pomegranate juice, another consumed 1,000 milligrams of pomegranate extract in a capsule and another received a placebo juice. Researchers then measured the participants' skin resistance to UVB radiation by exposing them to increasing doses of UVB light for a short time on small areas of their arms. After 24-hours, they determined which dose induced skin redness. Researchers found that participants who consumed either pomegranate juice or the extract required a longer period of exposure to UVB to produce skin redness than those who got the placebo.

IMPACT
This study in women suggests that skin health and resistance to UVB radiation may be improved through nutrition, such as consumption of pomegranate juice or pomegranate extract. Investigators believe that a larger study with a more diverse group of participants would help to confirm the earlier results. Also, further studies could help determine the effects of pomegranate consumption's on skin aging or skin cancer.

AUTHORS
The first author is Susanne M. Henning, an adjunct professor and the director of the Nutritional Biomarker Laboratory at the Center for Human Nutrition at the David Geffen School of Medicine at UCLA. The second author is Dr. Jenny Kim, a professor of clinical medicine at the UCLA division of dermatology and clinical nutrition. The senior author is is Dr. Zhaoping Li, a professor of medicine and chief of the division of clinical nutrition at the Ronald Reagan UCLA Medical Center. Other authors are listed in the journal article.

JOURNAL
The research is published in Scientific Reports.

FUNDING
This study was supported by departmental funds from the Center for Human Nutrition, Department of Medicine, David Geffen School of Medicine at UCLA.