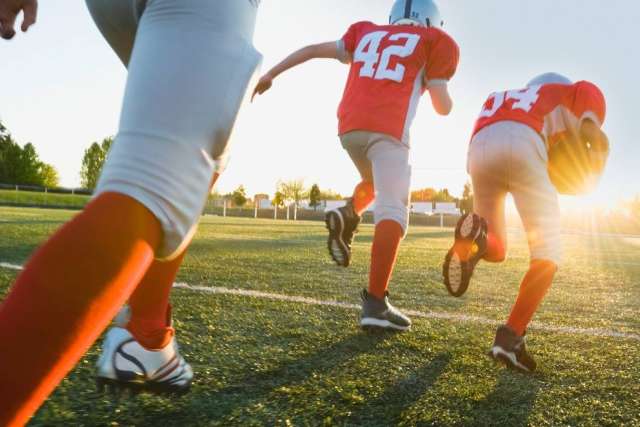 Dear Doctors: What can you tell me about new research finding that football players are getting Lou Gehrig’s disease? My son is going to join his high school team, and I’m worried about what it could mean for his future health.

Dear Reader: You’re referring to the results of a study that were published last year in one of the journals of the American Medical Association. The research was conducted by scientists who focused on the long-term consequences of repetitive brain trauma. The study looked at close to 20,000 professional football players who had participated in at least one game between 1960 and 2019. The data showed that professional football players were four times more likely than the general population to develop and die from amyotrophic lateral sclerosis, or ALS, a neurodegenerative disease.

Because the study covers 59 years, the researchers were also able to make an important connection between the length of a player’s football career and their risk of developing ALS. Specifically, the longer someone played football, the greater their likelihood of developing ALS became. Those players who developed ALS played more than 50% longer than those who did not.

ALS is also referred to as Lou Gehrig’s disease after the baseball player who was diagnosed with it. It’s what’s known as a progressive neurodegenerative disease. This type of disease occurs when something causes the nerve cells in the brain or the peripheral nervous system to lose their ability to function. A progressive disease is one that grows worse over time.

In ALS, the nerve cells that allow us to control our muscles begin to deteriorate and eventually die. When this happens, individuals lose control over voluntary movements. They gradually become unable to walk, move, eat, speak and even breathe. At this time, there is no cure for ALS.

In addition to linking the duration of a professional football player’s career to an increased risk of developing ALS, the study adds weight to the idea that concussion isn’t the sole, or even the major, danger to players. The focus is shifting to something known as sub-concussive hits. These are blows to the head that, while they don’t result in the nausea, headache, dizziness, blurred vision and confusion of a concussion, still have an adverse effect on the brain. And this effect appears to be cumulative. The repeated sub-concussive hits that professional football players sustain over the course of a long career are now suspected of playing a significant role in the players’ risk of developing, sometimes decades later, neurodegenerative disease.

The authors of the study have also spoken about the broader implications of these findings. This includes the risk posed by exposure to sub-concussive hits through one’s occupation, as well as in other very physical sports such as soccer and ice hockey. Football is no longer the easy choice for athletes that it once was. We think that if you have doubts, a meeting with your son and your family physician to weigh the potential risks and benefits will be helpful.

Our neurologists are leaders in clinical care, research, and education. Learn more and schedule your appointment.