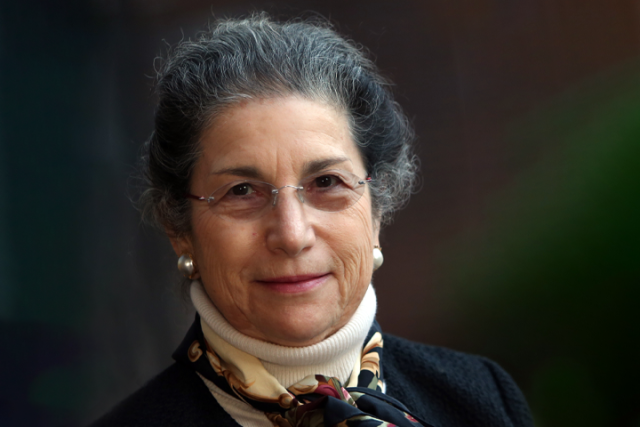 The American Cancer Society’s Distinguished Service Award was given to Dr. Patricia Ganz, director of cancer prevention and control research at UCLA’s Jonsson Cancer Center, in recognition of her major contributions and commitment in the field of cancer research.

Ganz, a professor in the UCLA Schools of Medicine and Public Health and a founding member of the National Coalition for Cancer Survivorship, was one of six people honored today at a meeting in Atlanta in honor of “their unique talents and dedication in helping reduce the burden of cancer,” cancer society officials said.

Each year, the society honors individuals whose work is helping to eliminate cancer as a major health problem. Honorees were recognized for their work in cancer control, volunteerism, humanitarianism and advocacy.

“It is an honor to receive this award from the American Cancer Society for doing work that I love and feel passionate about,” Ganz said. “The American Cancer Society has led the way in making the public aware of how we can reduce the burden of cancer and improve the quality of life of survivors. I feel privileged to have been part of that effort.”

For two decades, Ganz has conducted ground-breaking research that has changed the face of cancer survivorship. She is considered the top national expert on quality of life after breast cancer, and her leading-edge studies have changed the way the medical field views the post treatment health problems faced by millions of former patients nationwide. She was recently elected to the National Academies' Institute of Medicine, considered one of the highest honors bestowed to professionals in the fields of medicine and health.

Ganz grew up in Beverly Hills, the daughter of a physician and a homemaker who later ran a family business. The older of two children, she attended Harvard where she majored in biology. But she spent summers working in UCLA laboratories. In her third year of college, Ganz decided to attend medical school. She was one of only three women in a class of 120 UCLA medical students.

Ganz originally intended to become a cardiologist when she finished medical school. But a rotation through medical oncology changed everything. It was 1973, two years after President Richard Nixon declared war on cancer. Cisplatinum was saving the lives of young men who had been dying of testicular cancer. Oncology, Ganz decided, would be the field where she could make a real difference.

“I had the naive hope that we were on the road to a cure for cancer,” said Ganz. “For me, there was so much more hope in cancer care. And it was much more challenging in terms of prevention.”

Ganz focused her research on an area that no one else seemed interested in — the quality of life for cancer patients and survivors. In 1978, after she completed her residency, Ganz chose to work at the Sepulveda VA Medical Center, where she opened a hospice center to provide palliative care to patients from diagnosis until death. Instead of focusing on the last few weeks of life, Ganz and her team provided multidisciplinary, symptom-focused care from diagnosis on.

Her work focused not only on their physical symptoms, but also on their emotional, nutritional and psychological needs. She launched support groups to help patients cope with their disease.

“I recognized that we had to take care of all of a patient's needs, not just their medical treatment,” she said.

Ganz teamed up with a psychiatrist and a psychologist and, using grant money, they launched a program to determine the needs of cancer patients during and after treatment. That work led to other grants and more research in this emerging specialty. Eventually, Ganz focused on breast cancer patients. By the mid-1980s and early 1990s, treatments for breast cancer were improving, as was the understanding of the biology of breast cancer. Women were living longer after treatment. Though they beat their cancer, they often suffered from fatigue, fertility issues, mental fogginess and cardiac problems.

“The treatment regimen choice,” Ganz said, “made a difference in their quality of life after treatment.”

Ganz continues to be there for cancer survivors. Last year, she was selected to head up a new center for cancer survivors, funded with a grant from seven-time Tour de France winner Lance Armstrong. Ganz serves as director of the UCLA-LIVESTRONG Survivorship Center of Excellence, which addresses the needs of the ever-increasing number of cancer survivors in the United States.

UCLA's Jonsson Comprehensive Cancer Center comprises about 235 researchers and clinicians engaged in disease research, prevention, detection, control, treatment and education. One of the nation's largest comprehensive cancer centers, the Jonsson center is dedicated to promoting research and translating basic science into leading-edge clinical studies. In July 2007, the Jonsson Cancer Center was named the best cancer center in California by U.S. News & World Report, a ranking it has held for eight consecutive years.