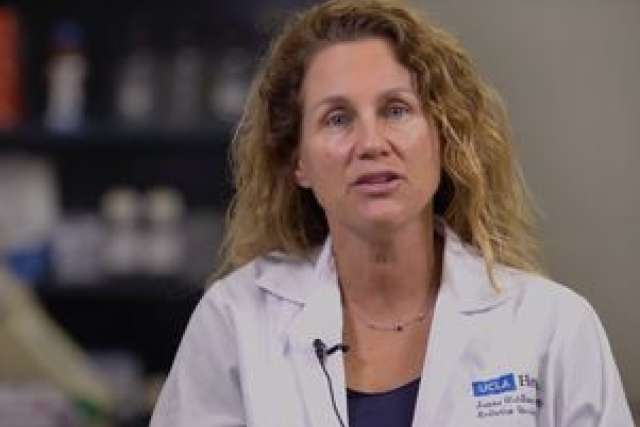 Researchers have found that people with advanced head and neck squamous cell carcinoma and the KRAS-variant inherited genetic mutation have significantly improved survival when given a short course of the drug cetuximab in combination with standard chemotherapy and radiation.

The study was led by UCLA Jonsson Comprehensive Cancer Center member Dr. Joanne Weidhaas in collaboration with colleagues at the NRG Oncology RTOG. They discovered that people with both head and neck squamous cell carcinoma and the KRAS-variant who were treated with standard treatment, but not with cetuximab, had a higher risk of failing treatment and developing metastatic disease, meaning the cancer spreads to distant organs and is incurable.

In 2006, researchers discovered the KRAS-variant, an inherited genetic mutation found in up to 25 percent of people with cancer. The KRAS-variant is a biomarker that disrupts a class of important regulators, called microRNAs, which were discovered in 2000. The mutation has been shown to predict response to cancer therapy for many cancers, including head and neck cancer. It was not previously understood exactly how this biomarker worked.

The current standard of care for advanced head and neck squamous cell carcinoma involves chemotherapy and radiation. However, this approach typically results in a 50 percent treatment failure. Cetuximab is a monoclonal antibody that was previously shown to be beneficial for these patients when combined with radiation and chemotherapy. Yet a randomized phase 3 trial was unable to identify those who benefited from cetuximab.

This is the first evidence that the KRAS-variant can predict response to radiation, and that individuals with the KRAS-variant may have an altered immune system. This likely explains both elevated cancer risk as well as benefit from cetuximab for these individuals. The results also indicate the KRAS-variant’s potential to identify people who will respond differently to therapies that depend on the immune response. Weidhaas said that using the KRAS-variant and biomarkers like it to personalize radiation therapy as well as developing immune therapies for all cancer is very promising.

Weidhaas, a professor in the department of radiation oncology and director of translational research at the David Geffen School of Medicine at UCLA, is the lead author.

The study is published online today in the journal JAMA Oncology.

The National Cancer Institute funded the phase III trial and data analysis through NRG Oncology RTOG, and MiraDx funded the sample testing portion of the study.

Weidhaas co-founded MiraDx, a company that conducts genetic testing for the KRAS-variant biomarker.