Looking back at this centennial year on UCLA Newsroom 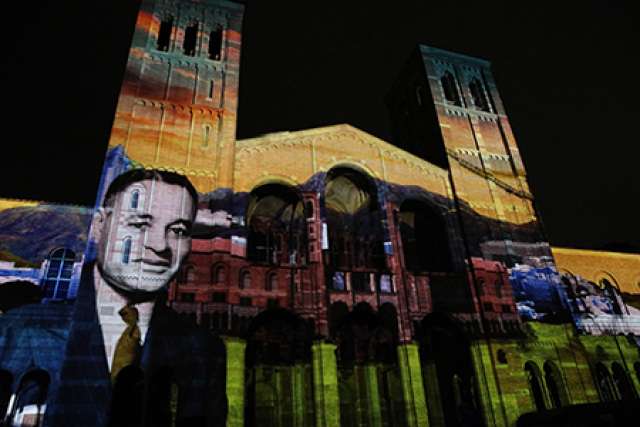 UCLA began observing its 100th birthday this year and delivered new advances in research, health care, the arts, community service and teaching. These are some of the top stories from UCLA Newsroom in 2019 — those which made news and engaged the community of Bruins and beyond.

UCLA Newsroom will resume publishing on Jan. 2, 2020. For more, be sure to peruse the archives and to follow UCLA Newsroom on Twitter.

Founders of UCLA would marvel at their creation

In just 100 years, UCLA has grown into a respected center of learning, research and health care — and a community pillar with transformational impact in California, the nation and the world.

Koreatown school shows how UCLA's commitment to access pays off

UCLA Archive
UCLA from overhead in the 1930s.

[Not] a century of women's sports at UCLA

Women's athletics have changed campus culture and the lives of thousands of student-athletes — and created new role models.

John McNeil retired before most current freshmen were born, but the professor emeritus of education still comes to campus every day.

A detailed analysis of a star's orbit near a supermassive black hole gives a look into how gravity behaves.

Ancient stars shed light on Earth's similarities to other planets

A new method used to study planets' geochemistry implies that Earth is not unique.

Researchers have designed a nanogenerator that can work in remote areas on its own power — and acts as a weather station.

Solar cells (like some people) work better with caffeine

Perovskite-based cells made with the chemical found in coffee maintained their power conversion efficiency for several weeks longer than those without it.

UCLA Health
Jason Esterhuizen is able to follow the sidewalk thanks to an experimental brain implant.

UCLA researchers implanted a wireless device that enables people without sight to detect motion and distinguish light and dark.

The findings could lead to new methods to get the body's repair enzyme to work better.

The invention relies in part on another UCLA invention: photonic time stretch.

Professor found that the left rostrolateral prefrontal cortex is important in accessing knowledge that was formed in the past and making decisions about it.

The findings stress the importance of learning how existing drugs work to repurpose them for potential use in treating other diseases.

'Pink tax' activists made the most of their UCLA experience

Twin sisters Helen and Rachel Lee have dedicated themselves to repeal of the sales tax on feminine hygiene products.

Haya Kaliounji founded the non-profit, Rise Again, which provides people wounded in the conflict in her home country with free prosthetic limbs.

College Signing Day was hosted by UC and Reach Higher, the college access and success initiative launched by the former first lady.

Researchers estimate that about 25,000 births per year were affected over two decades.

UCLA aflutter over the butterfly effect

Why there were so many painted lady butterflies in Southern California this year.

UCLA to launch institute for scholarship on Armenia and its diaspora

The interdisciplinary institute, the first initiative of its size and scope, was created with a gift from the estate of Kirk Kerkorian.

Unearthing the mystery of the meaning of Easter Island's Moai

The Rapanui people most likely believed the ancient monoliths helped food to grow on the Polynesian island.

As the nation heads into another contentious presidential campaign, UCLA will study what drives voters' choices in 2020.

The study's authors urge educators and policymakers to address poverty, health and educational practices that undermine achievement and opportunity.

"We feel confident our partners in Hollywood today see the value of diversity in ways that they did not before," said Darnell Hunt, dean of the UCLA College Division of Social Sciences.

Inviting the public into the classroom for '10 Questions: Centennial Edition'

UCLA Arts program brings the public together with students and 30 leading minds from across campus to engage in conversations around 10 essential topics.

The genre-defying artist was awarded the campus’s highest honor. This year's medal winners.

UCLA UniCamp is so much more than summer camp

Since 1934, student counselors at the Bruin-led camp have learned that volunteering with low-income kids is a life-altering experience.

Dental clinic shines as beacon of health and dignity

For 50 years, UCLA faculty and students have provided affordable oral health care for tens of thousands in Venice and beyond.

Engineers went into the field after major California earthquakes

Q&A with professor Jonathan Stewart about what the UCLA team he organized learned from the swarm of Ridgecrest quakes.

Thanks to UCLA and Make-A-Wish, 6-year-old gymnast scores a perfect 10

Joselin Palma became a member of the Bruin gymnastics team for a day.

Henry and Susan Samueli give $100 million to expand engineering school

The couple have now given more than $188 million to UCLA and more than $478 million overall to the University of California.

The reinvestment brings his total giving to UCLA to more than $450 million.

The bequest by Sidney Roberts and Clara Szego Roberts reflects the couple's backgrounds — both benefited from college scholarships — and their passion for science and the arts.

Bazinga! 'The Big Bang Theory' to support twice as many UCLA students

Undergraduates who received scholarships to pursue science, technology, engineering or math degrees visited the cast and crew on set.

The prominent cancer researcher was honored for his invention of the breast cancer drug Herceptin.

The renowned scholar of race, mass incarceration and immigration said she will continue to expand her social justice work.

Carter took over as the chief academic officer of UCLA.

'I was shocked and grateful:' UCLA nurse wins nurse of the year award

Q&A with Melissa Reider-Demer, who was honored by a national organization that promotes clinical safety, patient experience and workforce engagement.