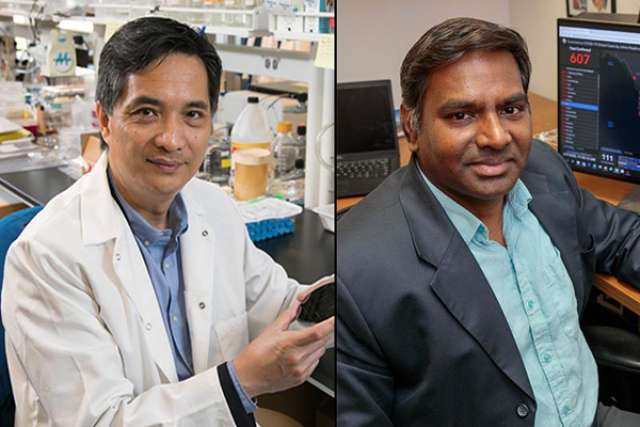 Two scientists at the Eli and Edythe Broad Center of Regenerative Medicine and Stem Cell Research at UCLA have received awards to conduct discovery and translational research into treatments and vaccine platforms for COVID-19 from the California Institute for Regenerative Medicine, the state's stem cell agency.

The recipients are Vaithilingaraja Arumugaswami, associate professor of molecular and medical pharmacology at the David Geffen School of Medicine at UCLA, and Song Li, chair and chancellor professor of bioengineering at the UCLA Samueli School of Engineering.

Arumugaswami's $349,999 award will fund his interdisciplinary team's efforts to conduct the pre-clinical research necessary to bring a promising treatment candidate for COVID-19 to clinical trial.

The drug, Berzosertib, is currently being evaluated in Phase 2 clinical trials for several solid cancers including high-grade serous ovarian cancer. Berzosertib works by blocking a DNA repair pathway that is exploited by solid cancers and the SARS-CoV-2 virus. Coronaviruses are known to hijack this pathway for viral replication, the process by which viruses make copies of themselves inside of host cells.

This new application for Berzosertib was discovered by Arumugaswami and Robert Damoiseaux, a professor of molecular and medical pharmacology, through a test screening of 430 cancer drug candidates on epithelial cells infected with the virus. They found that Berzosertib was most effective at limiting viral replication and cell death, suggesting that this drug could be used as a treatment to prevent lung disease and other tissue damage associated with COVID-19.

Arumugaswami and his collaborators suspect that if administered soon after diagnosis, the drug could limit the spread of infection and prevent the onset of disease-associated complications without significant side effects.

"Clinical trials have shown that Berzosertib blocks the DNA repair pathway in cancer cells, but has no effects on normal, healthy cells," Arumugaswami said. "For this reason, we think this drug shows great promise for treating COVID-19 patients and could be rapidly and safely be deployed in the clinic."

This award will enable Arumugaswami and staff research associate Gustavo Garcia Jr. to conduct pre-clinical tests of Berzosertib using human stem cell-derived lung organoids infected with SARS-CoV-2. These organoids were developed by UCLA Broad Stem Cell Research Center member and professor of pediatrics and pulmonary medicine, Dr. Brigitte Gomperts. They are grown by coating tiny gel beads with human lung-derived stem cells and then allowing them to self-assemble into the shapes of the air sacs found in the human lungs.

Gomperts previously received a grant from CIRM to support her work using these organoids to screen thousands of drug candidates with the aim of identifying a treatment that can reduce the number of infected cells and prevent damage in the lungs of patients with SARS-CoV-2.

To design a potential clinical trial of this drug, Arumugaswami is collaborating with Dr. Donald Kohn, a distinguished professor of pediatrics and microbiology, immunology and molecular genetics, who has led several CIRM-funded clinical trials, including a trial of a new treatment for sickle cell disease.

If the group's studies are successful in proving that Berzosertib is safe and can limit viral infection and cell death in lung organoids created using human cells, he will next submit an investigational new drug application to the Food and Drug Administration. This application is a critical first step to launching a clinical trial.

Li's $149,916 discovery award will support his work to develop a biomaterial platform that can be added to vaccines for SARS-CoV-2, the virus that causes COVID-19, to boost long-term immune response in elderly people and other vulnerable populations.

His platform will work by stimulating the formation of T memory stem cells, a unique subset of memory immune cells that are stem cell-like in that they have the ability to self-renew and give rise to a range of memory and effector T cells.

When naïve T cells recognize a foreign pathogen, they increase in number and produce scores of effector cells that quickly spring to action, traveling to the site of infection to eliminate the invader. They also produce a small but crucial number of memory cells, including T memory stem cells, which can remain in the body for decades and fight that same pathogen should it ever return.

"The number of naïve T cells present in our bodies decreases as we age," said Li, who is also a professor of medicine at the David Geffen School of Medicine at UCLA. "So for older people, their immune systems cannot effectively generate T memory stem cells, making them vulnerable to infectious diseases."

Li and his team are working to overcome this problem by creating a vaccine booster platform that could help older people and others who may have low numbers of T memory stem cells remain protected from infection for longer.

If successful, the project should be able to move quickly through the regulatory process because the booster will be made up entirely of components that are either already approved by the Food and Drug Administration for use in humans or currently being used in clinical trials for other indications. The primary component is an artificial antigen-presenting cell, or aAPC. These cell-sized microspheres are used in some immunotherapy treatments for cancer to mimic the cells present in our bodies that activate T cells.

The aAPCs that Li is developing will present T-cell activation signals known as antibodies and release chemical messengers called cytokines to stimulate the formation of T memory stem cells. When these component parts are combined with a SARS-CoV-2 vaccine, they will prompt the production of immune cells that are primed to recognize and eliminate the virus.

This technology could have benefit far beyond the SARS-CoV-2 pandemic.

"For this project, the specificity to SARS-CoV-2 comes from the vaccine our platform is paired with," Li said. "Our technology could be used to help older people and other vulnerable people build stronger immunity to anything we are vaccinating against – be it the flu, a new virus, or cancer."

To date, UCLA Broad Stem Cell Research Center scientists have received four of 11 CIRM awards for COVID-19 research, the most provided to any individual institution.