UCLA researchers identify previously unobserved type of white blood cell involved in development of pimples; may lead to new treatments for acne and other inflammatory diseases 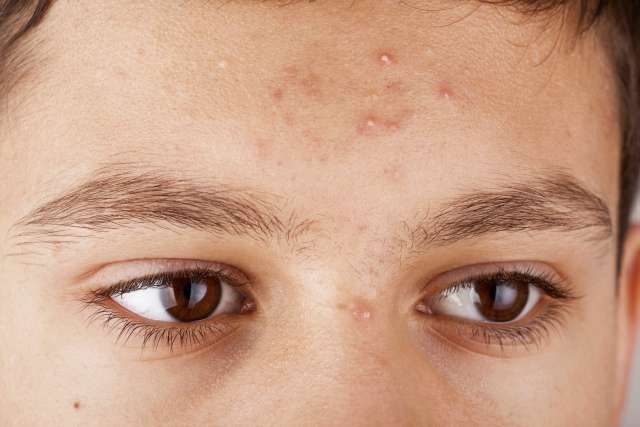 Acne affects more than 45 million people and is ranked third among chronic skin conditions that cause disability.  It has also been shown to have significant psychological effects on sufferers, especially teens.

The condition involves excess production of lipids in the hair follicles, bacterial interaction and a host of inflammatory responses involving macrophages (white blood cells), yet the specific pathogenic processes have been poorly understood. And while treatment options are available, scientists have long sought safer and more effective ways to manage – or even prevent – this common condition.

But findings from a study led by Robert Modlin, MD, and Tran Do, MD, PhD, at the David Geffen School of Medicine at UCLA and published in Science Immunology may lead to a new direction of investigation in the field.

Using a new single-cell analysis technology that identifies the types, as well as the location, of individual cells in a skin biopsy, the researchers found a previously unobserved type of macrophage – TREM2 –  in hair follicles and around the sebaceous glands in acne lesions. They then identified the process by which TREM2 metabolizes lipids, digests bacteria and facilitates the skin infection.  Until now, just two major types of macrophages – M1, which kills some types of bacteria, and M2, which acts as an anti-inflammatory – had been identified in acne.

“Before now, scientists have observed a distinct type of macrophage characterized by expression of the TREM2 protein in atherosclerosis, Alzheimer’s disease, obesity and other diseases involving lipid metabolism,” said Dr. Do, former MD-PhD student at the David Geffen School of Medicine at UCLA and the first author on the study. “That they play a role in the development of acne is an exciting finding. Since we were also able to observe the process by which these TREM2 macrophages are fueled by squalene, the major lipid found in the sebum of the skin, we now have a pathway that will allow scientists to study ways to block squalene synthesis involved in the development of pimples. And that information may serve as a model to better understand and treat acne and other diseases connected with TREM2 macrophages.”

For the study, researchers took two skin biopsies – one from an acne lesion and one from adjacent healthy-appearing skin – from six individuals.  The cells were processed and analyzed by a powerful RNA-sequencing technology that allows visualization of the gene expression of the samples and identification of the cellular composition of the skin. The process showed that acne lesions were characterized by two major cell types: hair follicle keratinocytes expressing genes encoding enzymes involved in the squalene-synthesis pathway and TREM2 macrophages. Using a technique known as spatial sequencing that allows the mapping of genes and cells expressed to a specific location on a skin sample, the researchers also were able to demonstrate that the hair follicle keratinocytes and TREM2 macrophages were in close proximity in acne lesions.

To find out how squalene affects macrophage function, they added squalene to macrophages in laboratory cultures and found that squalene induced macrophages to differentiate into TREM2 macrophages. The addition of squalene inhibited the ability of these macrophages to kill the acne bacteria. They discovered that squalene blocked the production of oxygen radicals and scavenged formed radicals; these radicals are potent killers of the acne bacteria. These data are consistent with the efficacy of topical benzoyl peroxide for the treatment of acne, since benzoyl peroxide spontaneously forms oxygen radicals. The squalene-synthesis pathway is inhibited by known acne treatments such as retinoids and other medications that have shown preliminary efficacy in the treatment of acne.

“This study opens a new portal for scientists studying not only acne and skin diseases, but also all inflammatory-based conditions,” said Dr. Modlin, Klein Professor of Dermatology and Distinguished Professor of Microbiology, Immunology and Molecular Genetics at UCLA, the study’s principal investigator. “It’s possible that statins, antifungals and other therapies that have already been shown to minimize atherosclerosis and other TREM2-macrophage-related inflammatory processes may work on pimples, and that further understanding of the pathways involved in acne might translate to new insights to treat other diseases.”

Researchers plan to next study the mechanism by which squalene induces TREM2 macrophages, the function of TREM2 in pimples and how they contribute to inflammation in acne.

The research was funded by the National Institute of Arthritis and Musculoskeletal and Skin Diseases (NIAMS).