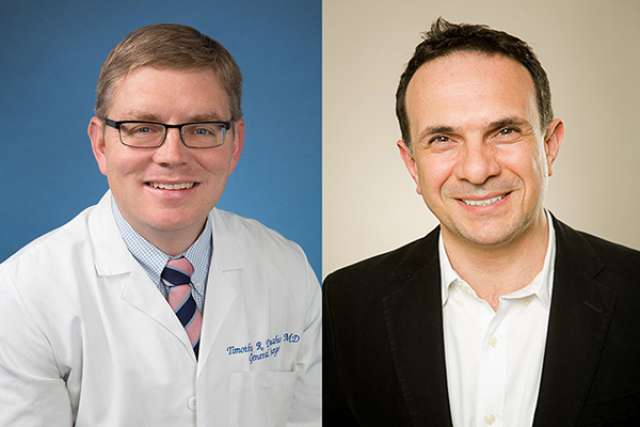 A team of researchers from the UCLA Jonsson Comprehensive Cancer Center has been awarded two research grants totaling $6 million from the National Institutes of Health to identify new ways to treat pancreatic cancer.

Pancreatic cancer is the third leading cause of cancer-related mortality in the United States, accounting for more than 47,000 deaths annually. Only 1 in 10 people diagnosed with this particularly aggressive disease live beyond five years, and most therapies — including conventional chemotherapies, targeted therapies and immunotherapies — are unsuccessful in treating it.

"Pancreatic cancer is one of the most challenging cancers to treat," said Dr. Caius Radu, a professor of molecular and medical pharmacology at the David Geffen School of Medicine at UCLA. "The lack of effective treatments suggests there is an inadequate understanding of the biologic complexity of the disease and the mechanisms behind its resistance to therapies that work in treating other types of cancers."

The two grant-supported projects, which will be co-led by Radu and Dr. Timothy Donahue, a professor of surgery and chief of surgical oncology at the Geffen School of Medicine, aim to untangle those complexities and to identify potential new immunotherapeutic approaches.

The first grant project will focus on mutations to the KRAS gene, which are implicated in nearly all pancreatic cancer cases. Mutated KRAS genes drive tumor growth in the pancreas in much the same way mutations to BRCA genes drive the development of breast cancer.

Working with Dr. Zev Wainberg, an associate professor of medicine at the Geffen School of Medicine and co-director of UCLA Health's gastrointestinal oncology program, the team will specifically target these KRAS oncogenes. In addition, they will investigate the mechanisms behind pancreatic cancer cells' overproduction of adenosine, a metabolite that can suppress the body's cancer-killing T cells, which play a crucial role in most immunotherapies.

"Immunotherapy has revolutionized the way we treat a number of malignancies, but to date, its impact in pancreatic cancer has been disappointing," said Donahue, who is also the surgical director of the UCLA Agi Hirshberg Center for Pancreatic Diseases. "Conventional immune checkpoint inhibitors approved for use in melanoma, lung cancer and other solid tumors show little or no benefit for the vast majority of pancreatic cancer patients, indicating that additional priming of the immune system will be absolutely necessary to overcome the intrinsic resistance of pancreatic tumors to immunotherapy."

In addition to studying preclinical models of pancreatic cancer, the researchers will use some of the support from the grant to open a clinical trial investigating new immunotherapeutic strategies that combine drugs across several therapeutic classes.

The researchers have already identified that interferon signaling is upregulated in a subset of human pancreatic cancer cells and functions to deplete nucleotides, which are essential for DNA replication and repair. They will continue to examine the mechanisms these tumor cells have in place to counterbalance the nucleotide-depleting and potentially deleterious effects of interferon signaling and will explore the potential therapeutic benefits of inhibiting the signaling process.

The information gleaned from these grant-funded experiments will provide the scientific basis for upcoming investigator-initiated clinical trials to evaluate novel immunotherapies against pancreatic cancer.