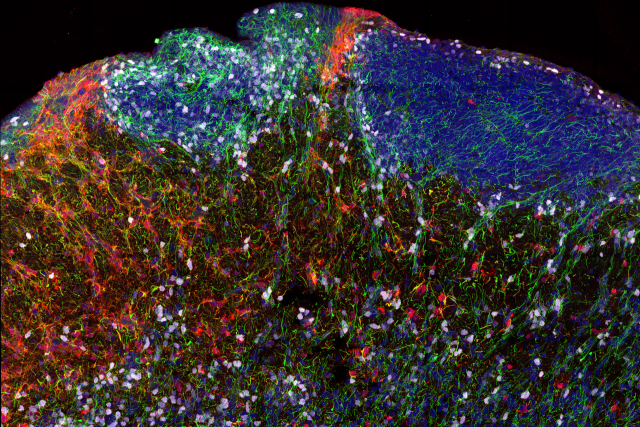 Two scientists at the David Geffen School of Medicine at UCLA have been awarded nearly $10 million from the National Institutes of Health’s Brain Research Through Advancing Innovative Neurotechnologies® (BRAIN) Initiative for research projects that aim to shed light on the developing brain’s cellular infrastructure to better understand brain disorders.

Chongyuan Luo, an assistant professor of human genetics, was awarded a grant totaling about $5.3 million over five years to systemically map the gene regulatory landscape across human brain development at a single-cell resolution for the first time. Aparna Bhaduri, an assistant professor of biological chemistry, will receive about $4.3 million over five years through a UCSF-led project to examine genetic activity and structure across stages of development and across species.

The NIH grants were awarded through the agency’s BRAIN Initiative Cell Atlas Network (BICAN), a large-scale effort to comprehensively catalogue cell types and molecular properties in the brain.

The effort will allow researchers to build a comprehensive catalog of cell types in the developing brain and identify gene regulatory regions at a cell-type specific level for hundreds of brain cell types.

“The database will significantly improve our study of genetic variants associated with psychiatric and neurological disorders,” Luo said. “More specifically, the dataset can lead to the discovery of specific cell types and genomic regions that mediate the risk of brain diseases.”

Luo’s team will collaborate with the research groups led by Jason Ernst at UCLA, Mercedes Paredes and Tomasz Nowakowski at UCSF, and Eran Mukamel at UCSD. The grant number for Luo’s project is U01MH130995-01.

Bhaduri’s grant: Her project is part of a $36.4 million grant at UCSF to examine brain development in humans, macaques, and marmosets during 4 stages of development: peak neurogenesis before birth, immediately after birth, childhood, and adolescence. The project aims to establish what cell types exist in the human and non-human primate brain, how they change over time, and how they are spatially organized. Comparing across species will help researchers understand which brain cell types may be more unique in humans and therefore may be more vulnerable to disease.

“With these answers we can then better understand how the brain is normally developed and how it is impacted in neurodevelopmental and neuropsychiatric disorders,” Bhaduri said.

Bhaduri compared the effort to generating a “parts list” of the developing human brain by using relatively new technology that allows researchers to effectively build a detailed map. The researchers will use single-cell RNA sequencing to study genes that are turned on by individual cells, and at the same time they will use single-cell ATAC-sequencing to look at genome architecture. This will help generate a crucial guide to cell types through development, and in parallel assays researchers will examine the cells across their spatial landscape on the brain.

The project builds off of previous work from Bhaduri and colleagues examining the developing human cortex, which enables complex cognition, and several other brain structures in early development.

The grant spans researchers at multiple institutions, including: Arnold Kriegstein, Tomasz Nowakowski and Alex Pollen of UCSF; Nenad Sestan and Rong Fan of Yale University; Huang Hao of the University of Pennsylvania; Jon Levine and Andre Sousa of the University of Wisconsin-Madison; and Marcel Daadi of the Texas Biomedical Research Institute. The grant number is 1UM1MH130991-01.

“With the announcement of the BICAN awards, we are making an exciting transition in the overall BRAIN Initiative cell census program, which began in 2014,” said Dr. John Ngai, Director of the NIH BRAIN Initiative. “These awards will enable researchers to explore the multifaceted characteristics of the more than 200 billion neurons and non-neuronal cells in the human brain at unprecedented detail and scale —a feat in advanced technologies and cross-team research collaboration that will reveal new paradigms for understanding how pathological changes in particular groups of brain cells could cause neurologic and neuropsychiatric disorders.”