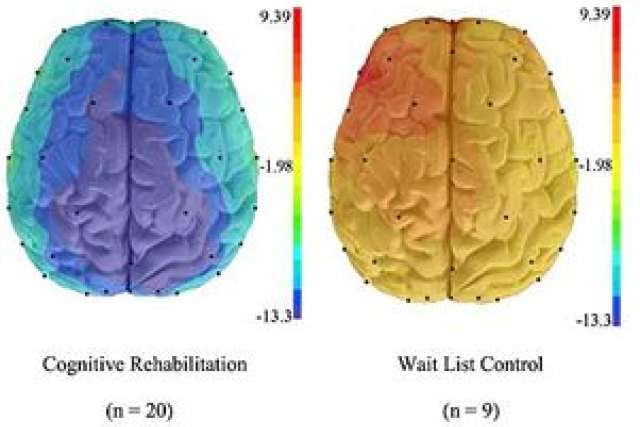 UCLA, The brain image on the left shows how women with breast cancer who had a series of mental training exercises experienced fewer problems with memory and concentration.

UCLA researchers have developed a program that could improve the day-to-day lives of women with breast cancer by addressing post-treatment cognitive difficulties, sometimes known as “chemo brain,” which can affect up to 35 percent of women after their treatments.

An estimated one in eight women will develop invasive breast cancer in their lifetimes, and following treatment, a mental fogginess can prevent them from being able to concentrate, staying organized and completing everyday activities, such as sticking to a schedule or planning a family gathering.

“We invited the women to participate in a research study that assigned them to early or delayed treatment with a five-week, two-hour group training session, where a psychologist taught them strategies to help them with their memory and maintaining their ability to pay attention to things,” said Ganz, director of prevention and control research at the cancer center. “These are activities we call executive function and planning, or the things all of us do in order to organize our day.”

Dr. Linda Ercoli, an associate clinical professor of health sciences at the UCLA Semel Institute for Neuroscience and Human Behavior, was responsible for the development of the cognitive rehabilitation intervention program and either delivered the training or supervised other clinicians who provided the group training sessions.

“We gave women exercises on, for example, how to remember a ‘to-do’ list, remembering to buy items at the store, or planning a party and deciding what type of food should be served to guests,” said Ercoli, a co-author of the study. “Participants were given real-life tasks to complete that would use these types of strategies to improve cognitive function.”

The intervention program also included homework and practice activities that they would discuss at the weekly sessions. These exercises were designed to improve memory and cognitive function.

Women in the delayed group were offered the intervention after completion of their two-month follow-up testing and this occurred when the researchers had enough women to form a group to provide them the intervention.

All of the women who participated in the study, whether they received the intervention early or at a delayed time point, completed questions about their mood and mental functioning. The women also had detailed neurocognitive testing three times: before learning which group they would be in, immediately after the end of the five weeks of training and then again two months later. Most of the women also had resting EEG (brain wave) testing to see if this could measure changes in how the women fared throughout the study.

“The brain wave pattern in the intervention group actually normalized,” Ganz said. “We hope that this might be an effective biologic way to assess the cognitive effects of cancer treatment in the future.”

The next steps are for other researchers to test this cognitive rehabilitation program in larger numbers of patients, and potentially to develop strategies to provide intervention much earlier in the course of breast cancer treatment to either prevent difficulties or hasten recovery.

“This study will be added to the growing body of literature demonstrating the validity of patient complaints,” Ganz said. “Furthermore, the intervention results provided important encouragement that these complaints can improve with appropriate training.”

The study was funded by the Breast Cancer Research Foundation and the Jonsson Comprehensive Cancer Center Foundation.

The randomized clinical trial results are available online in the journal of Psycho-Oncology.