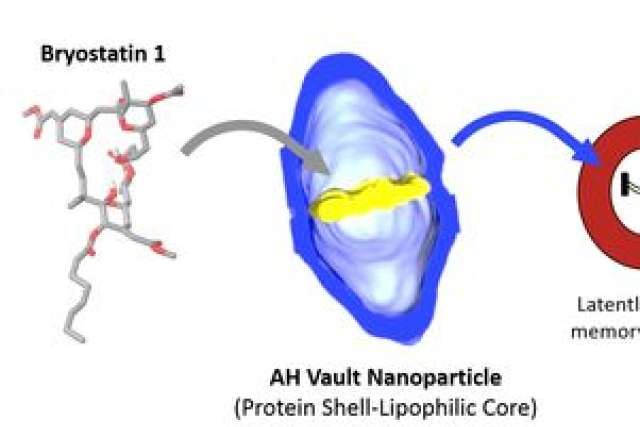 UCLA scientists developed a method for placing bryostatin 1 in nanoscale vaults for safe delivery to cells, where it can activate latent HIV, enabling the virus to be eradicated.

A multidisciplinary team of scientists from UCLA and Stanford University has used a naturally occurring nanoparticle called a vault to create a novel drug delivery system that could lead to advances in the treatment of cancer and HIV.

The research team was led by Dr. Leonard Rome, associate director of UCLA’s California NanoSystems Institute, and Dr. Jerome Zack, co-director of the UCLA AIDS Institute, both of whom are also members of UCLA’s Jonsson Comprehensive Cancer Center. Co-first authors on the study were Daniel Buehler, a UCLA postdoctoral researcher and Matthew Marsden, adjunct assistant professor in the department of medicine and a member of the AIDS Institute.

Their findings could lead to cancer treatments that are more effective with smaller doses and to therapies that could potentially eradicate the HIV virus.

The paper is the cover story of the Aug. 26 print edition of the journal ACSNano, and it was recently published online.

Rome and his then-postdoctoral student Nancy Kedersha discovered vaults in the 1980s. The naturally occurring nanoparticles number in the thousands inside each of our cells. A nanoparticle is a tiny substance, in this case constructed of proteins, that is measured in nanometers (1 nanometer is equal to 1 billionth of a meter).

Over the years, Rome and his collaborators discovered how to create vaults in the laboratory using the proteins that they consist of. Naturally occurring vaults contained other elements, but Rome’s team built empty ones, which eventually enabled them to pursue the idea of inserting drug molecules inside so they could be injected into a patient and directed to specific cells, where they would release the drugs.

Rome’s next goal was to improve upon existing chemotherapy drugs, which kill cancer cells, but also cause side effects because they are toxic to healthy tissue as well. Rome and his team theorized that using vaults to deliver drugs directly to the cancer cells would eliminate the drugs’ contact with healthy cells and should greatly reduce the treatment’s side effects. This concept has yet to be proven in humans, but the researchers are now closer to clinical trials of vault delivery technology.

Another target was HIV/AIDS, which in recent years has gone from being a death sentence to a chronic disease as anti-retroviral drug cocktails have improved. However, for people with HIV/AIDS, health maintenance still requires that they take the drugs for life, because of a phenomenon called provirus latency within cellular reservoirs.

This means that despite the viral load, or blood level, of HIV being reduced to undetectable levels by the drugs, latent (inactive) virus still accumulates inside cells in pockets called cellular reservoirs. Because HIV drugs can only affect active viruses, these reservoirs of latent virus survive drug treatment. When anti-retroviral drugs are discontinued, the latent virus activates, increasing the viral load and essentially rekindling the HIV infection.

The challenge for Zack and Marsden was how to address those latent HIV cell reservoirs, which prevent HIV from being eradicated in treated patients. The researchers found that one way to eliminate the reservoirs was to activate the latent HIV, making it susceptible to antiviral drugs. They knew a drug called bryostatin 1 activated latent HIV in the laboratory, but the idea of giving it to patients was problematic because of its toxic side effects.

Zack and Marsden needed a way to deliver the drug while minimizing side effects, making it a perfect candidate for vault delivery.

Rome and Buehler bioengineered a vault with a special lipophilic core, which binds lipids and thereby creates an environment that allows compounds like bryostatin 1 to be loaded into the vaults. With Zack, Marsden and Paul Wender of Stanford University, they demonstrated that the vault could hold the bryostatin 1 and release it when delivered to cells containing the latent HIV reservoirs. The team is pursuing further studies to bring vault-loaded activators of latent virus closer to clinical testing.

“Because latent virus is untreatable, latent reservoirs are the chief impediment to curing HIV right now,” said Zack, who also is a professor of medicine and microbiology, immunology and molecular genetics. “If we can activate the latent virus, essentially turning it on, we can treat it and eradicate it, thus curing the patient of HIV infection.”

“These experiments demonstrate the novel ability of these vaults to encapsulate therapeutic compounds up to more than 2,000 molecules per single vault,” said Rome, also a UCLA professor of biochemistry. “And these particular vaults can completely internalize their cargo, adding an extra layer of protection for healthy cells.”