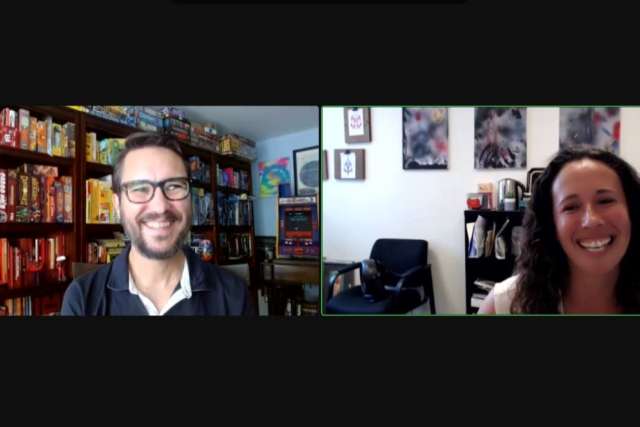 Wil Wheaton started acting when he was 7 years old. He got his big break at 14, playing Gordie in the coming-of-age film “Stand By Me.” Wheaton went on to play Wesley Crusher on TV’s “Star Trek: The Next Generation,” among scores of other roles on the big and small screens.

But in his recently released memoir, “Still Just a Geek,” Wheaton said he never wanted to be an actor. He was forced into the entertainment business as a child by his parents which resulted in serious mental health issues throughout his life.

Reflections of his difficult childhood and its emotional fallout are central themes in the new book, which was released in April. Wheaton discussed the book and his experiences with mental illness during a raw and vulnerable conversation with UCLA Health psychiatrist Katrina DeBonis, MD, in a presentation by the Friends of the Semel Institute for Neuroscience and Human Behavior at UCLA.

“I have to either say it out loud and deal with the reality of it, or I can continue to suffer in silence,” Wheaton said.

The new book is an annotated, updated version of Wheaton’s 2004 memoir, “Just a Geek,” which covers his life and career, including his experiences with feelings of shame, depression and anxiety.

Writing the book was often painful, Wheaton said, and not initially as cathartic as he’d hoped.

“All I felt was re-traumatized,” he said. “Ultimately, it was an important therapeutic experience for me,” as it inspired him to seek therapy.

Recording the audiobook, however, provided some relief — speaking the words aloud made them resonate in a new way, he said.

“When I was narrating a couple sections of the book, I thought, ‘Finally. Finally I get to tell the truth,’” he said. “Finally I get to give that little boy … the defense that (he) always deserved. I am an adult speaking up for him, because his parents chose not to.”

Wheaton said part of his therapy has included speaking out loud to his child self and comforting him.

Dr. DeBonis noted that people are often skeptical that such therapeutic approaches can be effective, but that with continued practice, “it really does land.”

Wheaton said he hopes that sharing the challenges of his mental health journey inspires others who may be suffering, to seek help.

“And if there is something going on with your mental health that is getting in between you and that, you absolutely are worth going to a doctor to get help. Please go see somebody. And don't give up. Don't give up when it gets hard.”

Wheaton said for years he blunted the emotional pain of his life with alcohol. When he got sober in 2016, he said, he began to see his past with greater compassion.

“Around the time that I quit drinking, I admitted to myself the truth, which was that (acting) was never my idea,” Wheaton said. “It was never something I wanted to do. I tried so hard to go along with that lie, because it was a conditional part of being accepted into my family. … And I became a drunk to avoid that pain.”

Now, he said, he can see how the characters he played as a child mirrored his own emotional state.

“I just booked jobs where I played kids who were basically me: They were sad; they were scared; none of them had fathers,” Wheaton said. “The closest relationship I had was to Gordie, where Gordie’s dad openly hates him.”

Wheaton said he has tried to speak to his parents about his childhood, but they haven’t been responsive.

A family spokesperson commented to “Access Hollywood” in May, following publication of the new book: "Wil's entire family is shocked by these allegations. We have always been a tight-knit, close, loving family," the spokesperson said.

With sobriety and therapy, Wheaton has rediscovered joy – being with his wife and two sons, writing, spending time in his game room and delighting in his “nerd” status.