Mending the Hearts of our Soldiers, One Paw at a Time 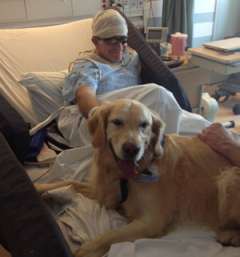 The UCLA People-Animal Connection (PAC) has recently extended its outreach to a program called Operation Mend which provides medical attention to military personnel who were severely injured in the Gulf War. Since 2007, Operation Mend has provided much needed medical attention to soldiers with the assistance of many of the nation's top surgeons. On a strict volunteer basis, UCLA physicians provide innovative treatment such as plastic and reconstructive surgery for injuries soldiers have sustained during battle. In addition, mental health support is not only provided to patients, but to their family members as well.

Over the past 8 months, PAC has sought to further enrich Operation Mend by doing what it does best: provide comfort to those in need. Rodger Thomason and his beautiful Golden Retriever, Logan, (who have been volunteers for the PAC program for over 3 years) have taken the lead in doing just that. This amazing duo is more than grateful to be giving back to those soldiers who have made great sacrifices for the United States of America. As Rodger puts it, "[the] least we could do is give some comfort to these brave soldiers who risked their lives for our freedom."

Rodger and Logan provide their services on an on-call, volunteer basis, spending anywhere from 10 minutes to over 2 hours with a soldier. As can be expected, some of these men are self-conscious about their injuries and have a negative attitude while going through treatment. However, as Rodger stated, "Logan is the icebreaker." Astonishingly, the presence of Logan puts these men at ease allowing them to feel free enough to open up and speak with Rodger, who sees himself as the "human extension of Logan." Because Logan is incredibly capable of making a patient, and in this case soldiers, so comfortable, it is no wonder why some of these men make more progress in one visit with Logan and Rodger than they do in months, according to various doctors and nurses who have witnessed these extraordinary moments.

Rodger's most memorable moment while volunteering with Operation Mend was a visit with a specific soldier who sustained serious burns over large portions of his body during battle. This soldier was very reserved and in a negative state of mind, and was having difficulty opening up to anyone. This was a situation in which Logan enabled Rodger to connect with the soldier on various common interests they shared leading to further discussion of the soldiers' experiences in the war and his injuries. After a lengthy visit, it was time for the soldier to undergo his treatment, yet he asked for another 10 minutes with Rodger and Logan because he was enjoying himself so much. This was one of those moments where the staff had not seen such tremendous progression from this specific soldier until Logan and Rodger arrived.

As Rodger reflects on what he has learned, he says, "I have become more compassionate and I have learned to just listen...I let them initiate and lead the conversation where they want." While Rodger believes that Logan is the superstar and he is just the guy holding the leash, it is obvious that this fantastic duo do more together than they could ever do separately. Together, these two continue to mend the hearts of the soldiers who have seen and gone through so much mentally, physically, and emotionally.

Operation Mend is an astounding program that seeks to restore the lives of the soldiers who have fought for this country. With the help of Logan and Rodger who provide a level of comfort which is often described as breathtaking, the UCLA PAC program is further assisting these soldiers on their way to better and happier days.