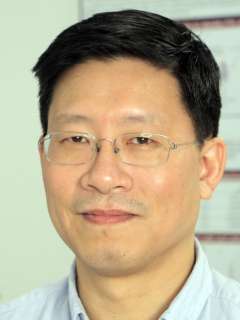 Otto Yang has been on faculty since 1999, and received tenure in 2004. He has a background in clinical infectious diseases, and his laboratory specializes in T cell immunology in HIV infection, relevant to developing immune therapies and vaccines for HIV and potentially other diseases including cancer and other viral infections.

Dr. Yang has a longstanding interest in infectious diseases and HIV-1 pathogenesis. This focus arose from his clinical experience as a medical resident physician at Bellevue Hospital in New York, when >50% of his patients were HIV-1 infected. He then pursued fellowship and postdoctoral training at Massachusetts General Hospital, where he developed a research program studying the role of CD8+ T lymphocytes (CTL, which are killer T cells that can destroy cells infected with viruses or which are malignant) in HIV-1 pathogenesis.

CTL are known to provide important protective immunity for viral infections such as CMV and influenza, and have been identified as a key component of immunity for HIV-1 as well. For this reason, many vaccine efforts have focused on trying to promote anti-HIV-1 CTL responses. However, our basic understanding of how CTL succeed and fail for HIV-1 infection is rudimentary. Dr. Yang's research focus in this area is to explore mechanisms of CTL antiviral function and viral evasion.

His laboratory pursues research on these questions, with projects ranging from controlled in vitro models of CTL-HIV interaction to clinical observational studies. A sampling of ongoing projects includes: studying the factors determining how HIV-1 develops CTL escape mutations (as it does for antiretroviral drugs), the role of the viral Nef protein that renders infected cells resistant to CTL, vaccination strategies for generating HIV-1-specific CTL responses in blood versus mucosa, the premature aging leading to failure of CTL during HIV-1 infection, the immunologic sequelae of perinatal HIV-1 infection, the fitness costs for viral escape mutations against CTL and antiretroviral drugs, the evolution of HIV-1 sequences in different genetic and immune backgrounds, the role of the mucosal immune compartment on susceptibility to HIV-1 infection. The unifying theme of these studies is to understand principles of immunopathogenesis that will be useful for vaccine and immunotherapy development.

A more recent research interest has been the role of CTL other diseases, such as the development of rejection in organ transplant patients. Dr. Yang has begun working with the new composite tissue transplantation program at UCLA, which will perform hand and face transplants, studying the role of this arm of immunity in causing tissue rejection. More recently he published several works looking at immune responses in COVID-19.

In addition to these research interests, Dr. Yang is also a clinician who maintains an active clinical role in the Division of Infectious Diseases.

Brown University School of Medicine, MD, 1990
What insurance is accepted?

Role of Cellular Immunity in HIV-1 Pathogenesis and Vaccine Development, Other Viruses, and Organ Transplantation