Masumi Umezaki stood before a group of UCLA medical students assembled in the auditorium of Geffen Hall, her voice quavering slightly as she recounted her journey of self-discovery as a transgender woman and the interactions with physicians that ensued. The first time she brought up her gender dysphoria in a health care setting had been disastrous. In the course of a routine physical, the doctor asked Umezaki if she had any health complaints. “I told him I felt trapped in my body,” recalled Umezaki, one of eight transgender individuals who spoke with students as part of the David Geffen School of Medicine at UCLA’s Caring for the Transgender Community module. “His face soured. He said, ‘That sounds like a psychological issue. What do you want from me?’ As soon as I left, I broke down and cried.”

Umezaki found a new physician, but when she mentioned wanting to begin hormone therapy, the response was terse: “I can’t help you, but I wish you luck.”

The third time was different. Asked if she had any health complaints, Umezaki mentioned not only her gender dysphoria, but also that she was suicidal, not sleeping, barely eating and having panic attacks. “Oh my god, we need to get you some help,” the doctor said. He spent the next half hour sitting with Umezaki as she sobbed. After acknowledging that he lacked experience with the type of care she needed, he vowed that if he couldn’t find someone who could help, he would learn himself. Umezaki looked out at the students. “If someone comes out to you, consider that you might be the first person who has ever listened,” she said. “This doctor had no more knowledge about trans care than the other two, but he listened, and he saved my life.”

Few practicing physicians are well-versed in the lived experiences of their transgender patients, and fewer still have been educated during their medical training about transgender health care needs. UCLA was among the first to address that shortcoming, when, in 2015, it added Caring for the Transgender Community to the second-year doctoring course, which covers non-scientific aspects of medical practice — from effectively communicating with patients to addressing social determinants of health such as poverty, education and discrimination. 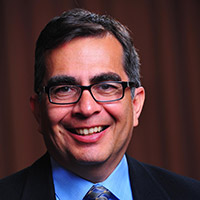 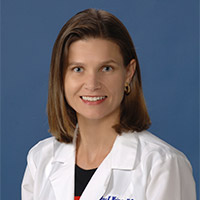 Arthur G. Gomez, MD ’86 (RES ’89, FEL ’90), professor of clinical medicine and director of the second-year doctoring program, was inspired to add the module by his experience with a longtime patient, Larry, “a gruff Marine who had lived a hyper-masculine life and told off-color jokes.”

Gradually, Dr. Gomez recalls, Larry began to offer clues — a feminine earring, painted toenails — suggesting he might be concealing his identity. “I teach my students that if you observe something that might be relevant, you should ask, so I did,” Dr. Gomez says. “That’s when Larry introduced me to Linda, the woman she had been her whole life.”

Working within the VA health care system, Dr. Gomez advocated for Linda, who had advanced lung disease, to obtain gender-affirming hormone therapy and surgery before her death.

This year’s Caring for the Transgender Community module began with a lecture by Amy K. Weimer, MD, co-director of the UCLA Gender Health Program. In addition to discussing gender-specific health issues and the disproportionate risk faced by transgender and gender-nonconforming patients — often related to their societal marginalization — Dr. Weimer advised the students on their interactions with a population that is too often treated poorly in health care settings. “We are raised in a binary society and will make mistakes,” Dr. Weimer said. “[When that happens] own it, apologize and move on.”

The lecture was followed by a panel discussion. In an effort to capture the diversity of experiences among the transgender population, Dr. Gomez and his doctoring colleagues have partnered with Transgender Talent, a talent management and production company for transgender performers and artists, to bring in transgender individuals to discuss their life experiences and interactions with health care providers, as well as to answer students’ questions.

“This module is a huge help to destigmatize the trans community for doctors,” says Ann Thomas, who founded Transgender Talent and presented as a member of the panel. “Too often, much of society confuses us with drag queens and assumes we are all sex workers and have AIDS. That’s far from the truth.”

At the close of the module, student Kevin Ding reflected on what he had learned. “It hadn’t dawned on me how much trust someone who is transgender is putting in you and the power the physician has to either make them feel like a million bucks or tear down their world with just a few words,” he said. “That’s a privilege but also very sobering. And it was a reminder of why I decided to go into medicine — to treat everyone, regardless of their identity, with unconditional love.”

Previous
On the Road to Health Care Equality
Next
Photo Synthesis