The role of clinical laboratories in patient care often has taken a back seat to glossier areas of medicine. But in the fight against COVID-19, their efforts are at the forefront as they work to implement and develop new diagnostic tests that ultimately may determine the future course of treatment for this disease.

Omai B. Garner, PhD (FEL ’12), associate professor of pathology & laboratory medicine and director of UCLA Health’s clinical microbiology laboratory, and Lee H. Hilborne, MD (RES ’87), professor of pathology & laboratory medicine and medical director of care coordination for UCLA Health, are used to being behind the scenes. The work that they and their laboratory colleagues do rarely is seen by the public, but it is essential to diagnose disease and deliver the appropriate treatment for patients. In today’s fight against COVID-19, these once-unsung heroes are on the frontline of the battle.

“For years, we were on the last page of the newspaper, if we were there at all. Now we are on the front page,” Dr. Hilborne says. “The importance of testing has risen to the top because the thing that will control this pandemic is going to be our ability to test and identify patients with disease.”

Drs. Garner and Hilborne spoke with U Magazine editor David Greenwald. This Conversation was conducted online via Zoom in early April, and in this ever-evolving situation, it was not clear what might happen in the weeks and months to come before publication. 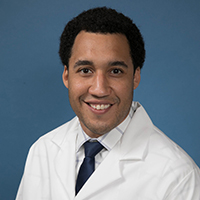 Let’s start by talking about the work that has been taking place in the UCLA Health clinical laboratory since this outbreak began.

Dr. Omai B. Garner: We were one of the early labs to think about having a test in-house. Early in this outbreak, when it was decided that people flying directly to Los Angeles from Wuhan, China, would be screened for the novel coronavirus at LAX, you had to send the sample to the Centers for Disease Control and Prevention (CDC) in Atlanta and get the result back from them, which took five or six days. Then it was approved that these tests could be performed by the Los Angeles County Department of Public Health, and so samples would be sent there, with a one- or two-day turnaround. At the end of February, the Food and Drug Administration (FDA) made it possible for clinical hospital laboratories to do their own testing and to perform either the CDC test or to develop their own laboratory-developed test. That’s when our lab moved as quickly as we could to begin with the CDC test, and we went live on that test 11 days later, on March 10, offering about 30 tests per day. Now, 20 or so days later, we’ve brought in a couple of different FDA-approved platforms to meet the need for COVID-19 testing, and we're able to offer around close to 1,000 tests per day, with turnarounds for our inpatient and emergency department populations of four-to-six hours. The turnaround time for some other areas that don’t require that level of speed is about 16-to-18 hours.

Dr. Lee H. Hilborne: On a broader scale, I think the experience of America's clinical laboratories is reflective of what Dr. Garner describes, ramping up in a very short period of time to do huge volumes. These are assays that, under normal circumstances, would take months, or even years, to develop. It took the loosening of some regulatory restrictions, as well as the dedication of the laboratory staffs like UCLA’s, to get it done, but they did get it done. Is there enough testing? No, not at all. There have been reports that some labs have been overwhelmed with the number of requests, despite the fact that they’ve considerably ramped up testing.

How was your lab able to get up and running so quickly?

Dr. Garner: A challenge of the CDC test was that it had to be run on a very specific viral-extraction platform. If a laboratory didn’t have this specific piece of equipment, it could not perform the test. We actually had two of these platforms that were used primarily for clinical research. Because our hospital system has supported our Department of Pathology to do clinical research, we had them, and we were able to pivot very quickly to using those platforms for testing. That is why we were one of the first hospital laboratories in the country to be able to perform the CDC test in-house. Then a new test for COVID-19 from a company that we use for a lot of other viral diagnostics received FDA approval, and we were able to use that test to supplement the CDC test.

What will be the future direction of testing for this disease?

Dr. Hilborne: Clearly, there currently is not enough testing, not enough supply to meet the demand. We need there to be sufficient testing, in the long term, to be able to understand where this disease is in the population, who has it and at what point someone is no longer at risk for transmitting it and can safely reengage in the community. We don’t completely understand all those issues right now, but they're being worked on with new blood-based antibody tests. Going forward, we will be doing more of that kind of serology testing to determine if someone has developed antibodies to the virus. We don’t yet know for sure, but my sense is that it will convey immunity. We don’t know how long that immunity will last, but there is reason to believe that, in fact, those individuals who have developed antibodies should be resistant to reinfection, at least for the foreseeable future. And I think we'll see more population-based testing, and that information will give us a better handle on the strength of the community’s immunity to the disease.

Dr. Garner: Once we are in June and July, I think we will be less worried about testing so many people for acute disease, because we will have gone through the surge and are coming down on the other side. This then becomes a larger question around antibody and immunity testing. Those are things that are going to be very important as we move toward a vaccine, however long that’s going to take — probably not before we are back into flu season in November, and we find ourselves in the same place as we are now, experiencing the respiratory viral season in the context of symptoms potentially being COVID-19.

Dr. Hilborne: Laboratories are critical to patient care, but, as I’ve said, that sometimes has gone unrecognized. I think this experience demonstrates that there needs to be greater investment in laboratory personnel and training the next generation of laboratory professionals. Many of the programs that train laboratory staff have closed, and, so, the average age of the laboratorian now is much older than it was when I started several decades ago. As people retire, we are approaching the edge of the cliff where there will be a shortage of trained personnel. Now there is greater recognition of how important laboratory professionals are to the broader mission of health care, and we need to reinstate training programs that have been lost.

Dr. Garner: I think that this particular crisis also has revealed some of the regulatory challenges that clinical laboratories face. Often, the regulatory bodies that oversee clinical labs have been unable to respond fast enough to issue emergency-use authorization to meet the need for diagnostic testing in an emergency situation. I think that is something that needs to be revisited. In today’s globally connected world, the potential for pandemic disease is increased, and it is vitally important to be able to move quickly to implement diagnostics. Countries that were able to move quickly — South Korea is a great example — were able to be better prepared for this particular outbreak. This doesn’t fall exclusively on the FDA, but one of the reasons we weren’t as prepared as we should have been was due to the lack of testing, and part of the reason for that lack was that clinical labs were hampered in their ability to perform any testing whatsoever until the end of February. That was a really long lag time in this outbreak. So, I think there are opportunities for relooking at the regulations around diagnostic testing to be able to create a pathway that can move faster in something like a global pandemic.

Dr. Hilborne: From a policy perspective, that is front and center. How much oversight is appropriate? In the United States, we have better testing than anywhere else, and that’s due, in part, to our infrastructure. We certainly don’t want to blow that up, but the question is, how do you rightsize it to be able to provide high-quality laboratory testing without creating huge burdens?

Photos: Courtesy of the American Society for Clinical Pathology

Dr. Hilborne, in a conversation with the executive vice president of the American Society for Clinical Pathology, you said that now is the time for scientists to come together to do the right thing. What did you mean by that?

Dr. Hilborne: What I meant was that it is important for us to have the correct and factual information on which to base decisions. Managing an epidemic is not a political issue; it is a scientific and epidemiologic issue. In a situation like this, it is scientists who should be influencing the policies for how we manage it. What we need are clear facts, we need truth and we need to be able to have it in real-time.

When you first heard reports about this disease out of China, what did you think? Did you anticipate at that time how this would evolve?

Dr. Garner: I’m a big history-of-virology and history-of-infectious-diseases buff. And so I know that spillover, which is this concept of an animal virus moving into human beings, happens all the time. And because I know that actually happens a lot, it didn’t light up my radar as anything that was going to be huge. Then, as we were watching it proceed and move to a human-to-human transmission stage, I started to think about other coronaviruses that were out there — SARS, MERS. These were viruses that were not really easy to pass human to human. And so, in that setting, I was interested in what was happening, but I had no idea that this was going to be anything like what it has become. This was still early on in the outbreak. It wasn’t until I started talking with the assistant director in my lab, a molecular diagnostic microbiologist, Dr. Shangxin Yang (PhD, FEL ’16). He said to me, “Omai, this is going to be really bad.” I was a little bit incredulous. But he had been talking with family and friends and university colleagues in China and who were near Wuhan and hearing their accounts and seeing the photos they were sending him. “No, no, it’s going to be worse than SARS,” he told me. Listening to him — that flipped a switch for me. It is hard when an outbreak is starting thousands of miles away to be able to appreciate how bad it’s going to be. But he was right.

Read about Dr. Shangxin Yang’s experience in Epilogue, “The Messenger.”