Access to parks, open spaces in your community can be a health factor 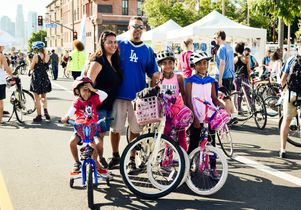 What are the societal factors that influence health?

When Dr. Richard Jackson asks this question, the response often includes some combination of economics, education and culture. Rarely does he hear the one he is looking for: the physical environment of one’s neighborhood.

“If it’s not easy to walk to places, you’re surrounded by unhealthy food choices, and you spend hours each day driving to and from your job, that’s a powerful determinant of your health,” says Jackson, a pediatrician and professor in the Department of Environmental Health Sciences in UCLA’s Fielding School of Public Health.

A well-known author, lecturer and consultant on how to align urban environments  with public health goals, Jackson has called the built environment “social policy in concrete,” given the impact of urban planning and architectural design on health and well-being. Unfortunately, Jackson notes, “communities that don’t have a strong voice are more disenfranchised when these decisions are made.”

At the Fielding school, faculty and students are working with community partners and policymakers in Los Angeles and beyond to ensure that decisions about everything from buildings and green spaces to public transit, bike lanes and streetscapes are made with an eye on their public health implications.

Of particular interest is the notion of transportation equity — matching the infrastructure of communities with the needs of their populations.

Michael Jerrett, professor and chair of the Department of Environmental Health Sciences, points out that in Los Angeles and many other cities, inequities persist not just in the ability to get around, but in access to parks and open spaces that are conducive to outdoor activity. In addition to their value to our quality of life, these facilities are critical at a time when sedentary lifestyles are associated with high rates of obesity and related chronic conditions such as diabetes, cardiovascular disease and certain cancers.

In a series of studies, Jerrett has found wide-ranging disparities between low-income communities and more affluent areas in both the quantity and quality of park spaces. “People living in low-income communities aren’t getting sufficient access to this health-promoting resource, and when they do have access, the area tends to be more polluted, the park facilities are not as well-maintained, and there is less park programming and less energy going into the programs offered,” Jerrett says.

Most recently, Jerrett’s group found that for pedestrians and bicyclists in Los Angeles, traveling to and from parks is dangerous — with as much as a 50 percent greater risk of traffic accidents in the area within a quarter-mile of the destination.

The study found that the risk is amplified in low-income and predominantly minority communities, in part because of an insufficient safety infrastructure. Jerrett notes that children and young adults are disproportionately at risk for traffic-related injuries and fatalities around parks. “There has been a movement toward instituting safe routes to school and safe routes to transit,” he says. “Given the unequivocal evidence of the benefits of physical activity, we need to also focus on ensuring safe routes to play.” Jerrett is currently consulting with the Southern California Association of Governments to integrate his group’s research into ongoing transportation planning.

Efforts to encourage more walking and bicycling face significant obstacles, and not just around parks. Jerrett notes that in Los Angeles, surveys consistently show personal safety concerns as a major barrier to bicycling.

“Unless you have an integrated system in which people can have options that allow them to bike away from dangerous roads and intersections, safety is going to be a deterrent,” he says. Advocates for more pedestrian-friendly boulevards must also overcome major challenges. “Unlike many European cities that evolved at a time when walking was the predominant mode of transportation, much of Los Angeles was developed around a car-dominated culture,” Jerrett says.

Nonetheless, there is growing momentum behind initiatives to reclaim the built environment for walkers and bikers — as illustrated by the success of CicLAvia, a Los Angeles nonprofit organization that temporarily closes a section of streets to vehicular traffic for Sunday events that promote walking, biking, local commerce and community engagement. CicLAvia reports that it has created more than 110 miles of open streets during its events throughout Los Angeles and has drawn more than 1 million people to these streets since it began in 2010. The next event is set for Sunday, March 26, when streets in Culver City, Mar Vista and Venice will be closed to vehicles.

In 2014, a Fielding school group embarked on a series of studies assessing CicLAvia’s impact. The researchers started with basic questions around who was attending the events and what impact CicLAvia had on businesses along the routes, but they quickly realized that something special was occurring — a dramatic shift in the physical and social environment that, though technically only for a day, could have long-term ramifications.

Among the benefits: improved air quality. A 2015 study led by Yifang Zhu, associate professor of environmental health sciences, measured air pollutants during a CicLAvia event held in and around downtown Los Angeles and found substantial declines in the presence of ultrafine particles and particulate matter measuring 2.5 micrometers or smaller — both of which are associated with increased risk for respiratory and cardiovascular disease. 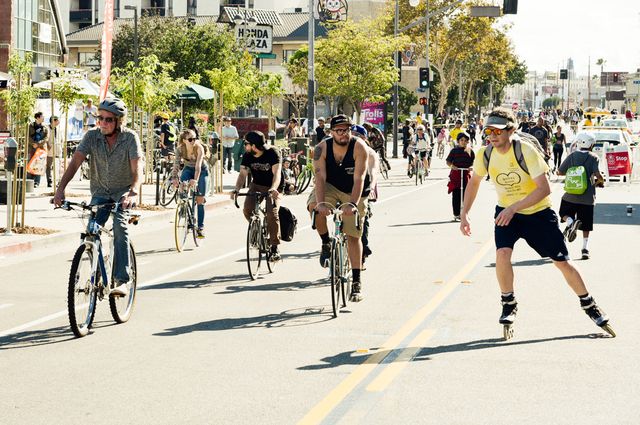 Courtesy of CicLAvia
UCLA public health researchers have found that CicLAvia events, even if they only last a day, have the potential of delivering longer-lasting health benefits.

“Not only does CicLAvia reduce the concentrations of traffic-emitted air pollutants, but we were also struck that the reduction of particulate pollution extends beyond the CicLAvia route,” Zhu says. Other studies by Fielding school researchers found more good news: significant reduction in crime around CicLAvia sites on the event days.

The researchers found that more than half of the participants surveyed would have been home or sedentary if not at the event. And fewer than half of CicLAvia’s participants arrive by car — opting for transit, biking and walking instead. Initial evidence also suggests that the more events the participant attended, the less likely that person arrived by car. “This could be pointing to alternative transportation behaviors being promoted or reinforced by CicLAvia attendance, though further study is needed,” says Christina Batteate, a Fielding school Ph.D. student who helped spearhead the CicLAvia research effort.

The team also found that when CicLAvia’s temporary public space is located in park-poor, low-income communities, a substantial number of the participants are first-time attendees from the local area. “At each event, thousands of new people are being exposed to this new paradigm of what our city can look like and how fun mobility and social connections can be,” Batteate says. “CicLAvia and other open-streets programs tangibly flip the narrative by saying that pedestrians and bicyclists matter. Even if for a day, this allows the community to envision that it can be something different.”

This story is in the UCLA Fielding School of Public Health Magazine.