Identification and Characterization of the Genetic Basis of the Corneal Dystrophies

The Cornea Genetics Laboratory has identified and reported dozens of novel mutations in genes associated with inherited disorders of the cornea and has identified the genetic basis of a number of different corneal dystrophies:

· Identification of the genetic basis of posterior amorphous corneal dystrophy 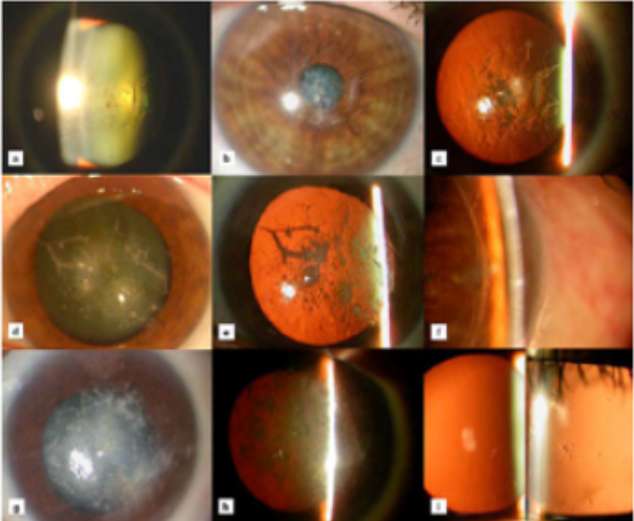 Fig. 1. Slit-lamp photomicrographs of combined granular-lattice corneal dystrophy associated with the Met619Lys mutation in the TGFBI gene in various members of a single family, wherein the disease presents as opacifications in the cornea. (Aldave et al, Arch Ophthalmol. 2008;126(3):371-377).

The solute linked carrier family 4 member 11 (SLC4A11) gene encodes a membrane protein that is highly expressed in the corneal endothelium, which consists of a monolayer of corneal endothelial cells that “pump” fluids across the inner layer of the cornea, maintaining the cornea in a slightly dehydrated state that is necessary for corneal clarity. Over 80 unique SLC4A11 mutations are reported to be associated with congenital hereditary endothelial dystrophy (CHED), a bilateral inherited disorder of the cornea that presents at birth or early childhood. SLC4A11 mutations are also associated with a subtype of Fuchs endothelial corneal dystrophy (FECD), which affects up to 5% of the world’s population above the age of 40, and is the most common indication for corneal transplantation in the US. Both CHED and FECD are characterized by the development of corneal endothelial dysfunction that results in corneal edema and impaired vision.

A.    Transcriptomic characterization of the cellular changes induced by loss of SLC4A11.

B.    Considering sex as a biological variable in the pathogenesis of corneal endothelial diseases.

The Cornea Genetics Laboratory is investigating the sexual dimorphic response to loss of Slc4a11 at phenotypic, transcriptomic, and functional levels using the Slc4a11-/- mouse model.

The Cornea Genetics Laboratory is actively collaborating with principal investigators in other disciplines to characterize the extraocular phenotypes induced by the loss of Slc4a11 in mouse model.

Corneal endothelial cell dysfunction is the primary indication for corneal transplantation in the United States and globally, accounting for 55% of all keratoplasty procedures performed in the US in 2018. However, the worldwide shortage of donor corneal tissue for the treatment of corneal endothelial dysfunction necessitates the development of viable alternatives to the current paradigm of one donor cornea restoring sight to only one recipient. While the prospect of CEnC expansion from ex vivo donor tissue brings hope for a new paradigm, where one donor cornea can restore sight to multiple recipients, significant challenges to the successful culture and expansion of CEnC in vitro exist, including cell state transition and cellular senescence. In an effort to overcome these challenges, the Lab is characterizing ex vivo corneal endothelial cells during cell culturing and expansion, and investigating the roles of oxidative stress and inflammation in mediating cell state transition and cell senescence in ex vivo corneal endothelial cells.