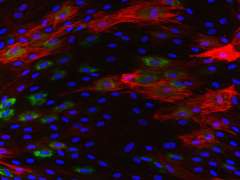 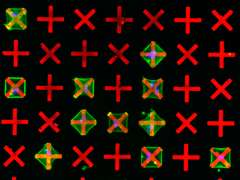 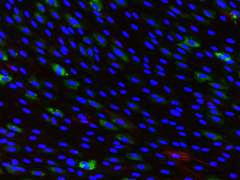 Targeting Wnt signaling as a potential therapeutic approach for ROP

Transplantation of autologous corneal epithelial stem/progenitor cells (CESCs) expanded in culture has successfully restored vision and revolutionized the treatment of limbal stem cell deficiency (LSCD), which is a major cause, either primary or secondary, of significant visual loss and blindness in many corneal disorders including aniridia.  A higher expansion efficiency of the CESC population corresponds to a greater probability of long-term graft survival.  Collaborating with Dr. Sophie Deng, using the small-molecule Wnt inhibitors and activators developed in my laboratory, we demonstrated that Wnt signaling plays a crucial role in promoting CESC expansion. Based on this study, we have designed a novel small-molecule Wnt mimic.  Because the maintenance of stem cell characteristics in the process of cell culture expansion is essential for the success of ocular surface reconstruction, the small molecules generated in this project may also be helpful in the development of novel pharmaceutical reagents for treating other corneal epithelial disorders.

Trabecular meshwork (TM) cells are the governing regulators of the TM structure.  When the functionality of these cells is impaired, the structure of the trabecular meshwork is perturbed, resulting in intraocular pressure (IOP) elevation, which is the most significant risk factor for primary open-angle glaucoma (POAG) and steroid-induced glaucoma.  Our research focuses on the study of steroid treatments, including the use of dexamethasone (Dex), which mediated the increase of IOP and the risk of ocular hypertension leading to steroid-induced glaucoma. Dex treatment can lead to irregular TM structure and potentially reduce outward flow of intraocular fluid through altering Wnt signaling. In addition, we use novel Wnt small molecule regulators to investigate whether these modulators would affect Dex-mediated phenotype on primary human TM cells. Additionally, we are studying the isolation, culture, and mechanical property characterization of cells residing within the trabecular meshwork, an ocular tissue responsible for intraocular pressure homeostasis.