Description: Differentiation of induced pluripotent stem cells (iPSCs) into a polarized RPE cell culture.  Two RPE tight junction proteins, zonula occludens-1 and claudin-19, are colocalized to an apical region of the cell periphery, where they contribute to a tight junctional complex that characterizes a differentiated RPE culture.  The tight junction limits movement of substances through the paracellular space and forms a boundary between the distinct apical and basolateral plasma membranes.  From Roni Hazim, postdoctoral fellow. 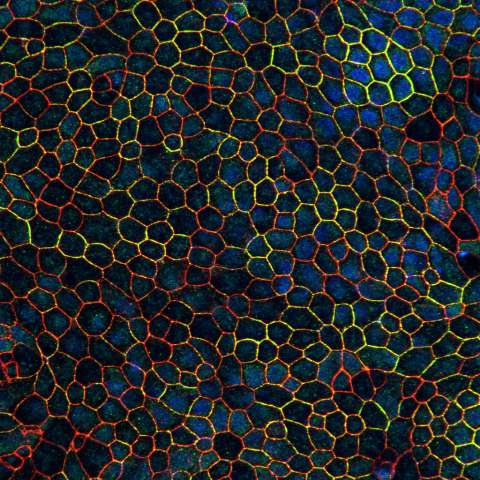 Localization of vitamin A receptor to basal surface of RPE

Description: The receptor for vitamin A, Stra6, has been localized to the basal RPE by immunofluorescence labeling of a cryosection of a mouse retina.  From Jane Hu, core technician. 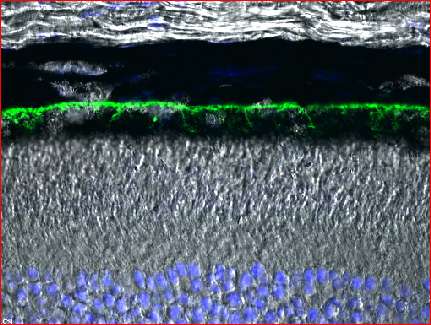 Description:
Sequential z-slices from four serial EM tomograms have been incorporated into a video. Each z-slice is only a few nm thick, thus providing superior resolution over a conventional transmission EM section (70-80 nm thick). Moreover, the combination of z-slices provides a 3D perspective. From Stefanie Volland, postdoctoral fellow. 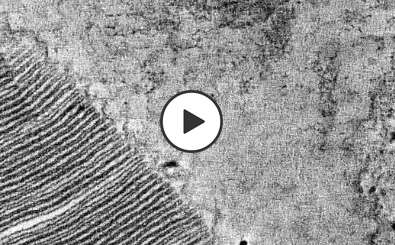 Photoreceptor Disks in 3D
Image analysis/EM tomography
3D model from reconstruction of an EM tomogram, showing the base of a monkey rod outer segment

Description: A 3D model of the base of a monkey rod outer segment, generated by segmentation of an EM tomogram. The nascent membranes are still continuous with the plasma membrane (green), whereas the more mature membranes have closed off into discrete disks (blue). From Stefanie Volland, postdoctoral fellow. 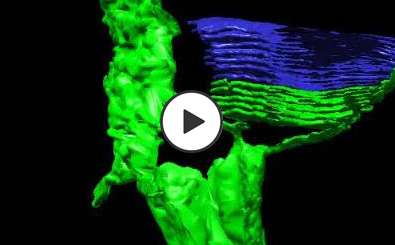 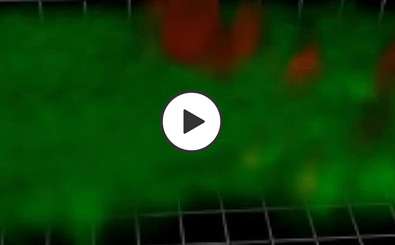 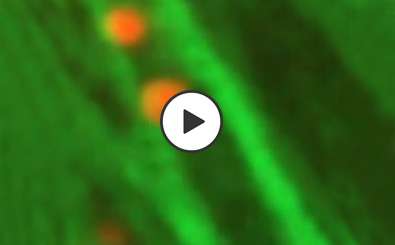