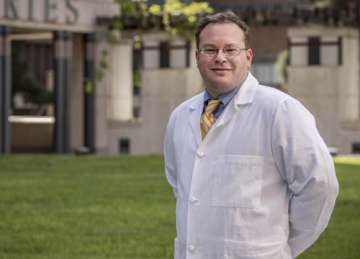 Two of the newest members of the UCLA Vatche & Tamar Manoukian Division of Digestive Diseases faculty are taking advantage of their unique preparation as clinician-scientists through the David Geffen School of Medicine at UCLA’s STAR (Specialty Training and Advanced Research) program.

Drs. Noam Jacob and Elizabeth J. Videlock are building on the research they began as part of STAR, which helps to meet the national need for physicians pursuing investigative careers. STAR combines clinical fellowship or residency training with advanced research training — in the cases of Drs. Jacob and Dr. Videlock, leading to a PhD.

“The STAR program allowed me to have a significant amount of protected research time, which is so critical,” Dr. Jacob says. “The program stresses the importance of finding the right mentors, with the idea that in this field it’s almost like an apprenticeship — there’s only so much you can learn by reading papers and taking courses. You need to learn from people who have been successful. STAR also taught us how to communicate our research effectively, whether in the form of written papers and grants, posters and oral presentations, or the ‘elevator pitch’ of summing it up in non-technical terms.”

Dr. Jacob studies the mechanisms of inflammatory bowel disease (IBD) — in particular, how molecules known as cytokines influence both inflammation and fibrosis in the disease process. Although medications that target cytokines in IBD are effective in reducing inflammation, there are no agents that effectively treat the intestinal fibrosis. “The challenge is to identify molecules that are responsible for fibrosis, and/or other aspects of the pathway that could be targeted for treatment,” Dr. Jacob explains.

Beginning with his STAR PhD research, Dr. Jacob has focused on TL1A, a cytokine that has been shown to cause both inflammation and fibrosis in IBD. “Patients with Crohn’s disease are genetically predisposed to overproducing TL1A, and those patients have been shown to develop strictures and scars in their intestines,” Dr. Jacob notes. Using animal models that overproduce TL1A, his focus is to determine the mechanisms by which TL1A promotes fibrosis — knowledge that could lead to new strategies to successfully intervene.

Starting with his PhD thesis, Dr. Jacob has looked at fibroblasts — the cells TL1A acts on that have been shown to promote fibrosis — and, separately, he has studied which parts of the microbiome conspire with TL1A to cause fibrosis. In collaboration with Jonathan P. Jacobs, MD, PhD, an assistant professor in the division, he showed in the mouse model that when the mice are not exposed to normal gut bacteria, they don’t develop fibrosis or inflammation, even though they are overproducing TL1A. “That tells us that you need the gut flora to cause this TL1A-mediated effect,” Dr. Jacob says.

Next, they showed that reintroducing a certain population of bacteria reestablishes the fibrosis in these mice. Based on that finding, they identified several bacterial candidates that correlated with the fibrosis in the TL1A-overproducing mice and are now conducting further analyses on the mechanisms involved. “The potential is that in conjunction with targeting TL1A, we might be able to eliminate harmful organisms or enrich for beneficial organisms,” Dr. Jacob notes. “This is an emerging feature in the treatment of inflammatory diseases — a multipronged approach rather than the use of a single agent.” 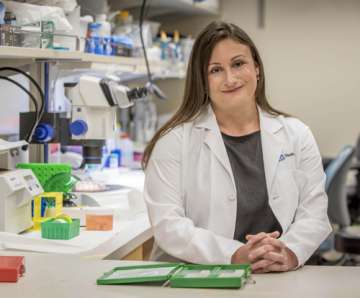 Dr. Videlock has had a longtime interest in the brain-gut axis and has published extensively in the field of irritable bowel syndrome. Her current research, which she started in the STAR program, seizes on emerging evidence on the role of the gut in Parkinson’s disease. It has been known that in people with Parkinson’s, the same build-up of abnormal protein deposits known as Lewy bodies that occur in the brain is found in the gut. Recently, though, studies in animal models have suggested that this pathology could travel from the gut to the brain.

“There had been a hypothesis for a while that the gut could be a site of initiation of Parkinson’s disease, and now there is stronger evidence for that, although it’s still controversial,” Dr. Videlock notes. “This would be exciting, because this is a slow-developing disease and if it can be detected in the gut before it reaches the brain, that would open the door to treatment that would prevent symptoms from developing.”

Whether or not Parkinson’s originates in the gut, it is indisputable that people with the disease experience gastrointestinal symptoms. “It is definitely a disease of the gut-brain axis,” Dr. Videlock says. “It’s also a disease for which we have good experimental tools, and there are outstanding opportunities for collaboration with the neurologists and neuroscientists at UCLA. Studying the gut aspect of Parkinson’s could lead to important developments, because it’s difficult to study the brain in living humans.” In addition, she notes, research has shown an increased prevalence of Parkinson’s disease in patients with inflammatory bowel disease.

Dr. Videlock is currently examining the role of inflammation in the gut-brain axis in Parkinson’s. As part of a pilot feasibility study funded by the division’s CURE: Digestive Diseases Research Center, she is working with a mouse model that overexpresses the protein that causes Parkinson’s disease. Dr. Videlock is currently analyzing the brain and colon tissue of the mice at two different time points to assess the inflammation-related changes. “I hope to identify both gastrointestinal biomarkers for the disease and gut-specific mechanisms that are part of the pathogenesis,” she explains.

Dr. Videlock, like Dr. Jacob, says the key to her training as a clinician-investigator was the protected research time STAR provided. “STAR invests in giving you the time to educate yourself, develop your techniques, and acquire the technical and cognitive skills that you need in order to succeed,” she says. “And unlike traditional MD/PhD programs where you start your PhD before doing any clinical work, we have already had that experience and figured out what we are interested in based on our work as doctors. Biomedical research needs clinician investigators because we come with a different perspective. It can be hard for clinicians to succeed in research, but STAR provides the ideal preparation.”