Getting help for non-epileptic seizures 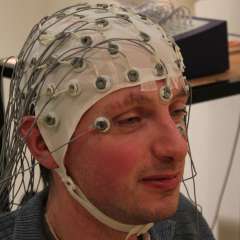 photo by Tim Sheerman-Chase is licensed under CC BY 2.0

Epilepsy causes most seizure disorders, but some people experience recurring seizures not caused by epilepsy. Dissociative seizures, also known as psychogenic non-epileptic seizures (PNES) or functional seizures, have drawn media attention lately, after TikTok star Dixie D’Amelio revealed in August that she was diagnosed with the condition in high school.

Now, epilepsy specialists at the David Geffen School of Medicine at UCLA have developed a machine learning algorithm that can cut that time down. Used in concert with a physician’s assessment, the system caught the vast majority of these cases.

The algorithm generates a numeric value, the Dissociative Seizure Likelihood Score (DSLS), using information collected during a standard clinical visit. The DSLS will not replace clinical decision-making, but rather support and complement the neurologist’s evaluation.

The results were published November 13 in the journal Epilepsy & Behavior.

Epileptic seizures stem from abnormal electrical activity in the brain, and medication or surgery can quell that excess activity. Dissociative seizures, on the other hand, aren’t linked to electrical firing in the brain, so those approaches don’t help. “The average time from seizure onset to diagnosis of dissociative seizures is around 8.5 years,” said Dr. Kerr. “The median is 3  years.” Meanwhile, the recurring seizures, which can occur several times a week, interfere with the patient’s daily life.

A correct diagnosis usually requires admission to the hospital for a video-EEG test. The video records outward signs of seizures, while the EEG detects electrical activity in the brain. By watching the video in conjunction with the EEG data, neurologists can see what’s happening in the brain during a seizure.

“We’ve seen patients who have had seizures for many years, even decades, without knowing the correct diagnosis,” said John Stern, MD, director of the Epilepsy Clinical Program at UCLA and the paper’s senior author. “Once they are admitted to the hospital, we usually are able to achieve a diagnosis within a few days.”

Typically, a patient doesn’t get referred for video-EEG until they have tried 2 different epilepsy medications without success, and are considered candidates for surgery. Some patients may be on their 4th or 5th medication before coming in for a consultation. The goal of this new diagnostic score is to refer non-epileptic patients sooner for video-EEG, so they don’t waste time and money on useless medications. By getting more appropriate treatment, patients with non-epileptic seizures who are diagnosed sooner have fewer seizures and better quality of life.

“The question that’s faced often in the clinic is when to arrange for this testing, at what point after beginning treatment should a doctor consider reassessing the diagnosis,” said Dr. Stern. “Having a tool which complements clinical decision-making can increase the likelihood of accurate diagnosis.”

The score relies on a set of 20 questions that a neurologist would typically ask the patient, including history of head injury, psychological trauma including sexual abuse, and description of the seizures. All that is required of the doctor is to enter the responses into the computer for calculation of the score.

“We tried to design it so the neurologist doesn’t have to do any other work other than putting it into the algorithm numerically,” said Dr. Kerr.

The DSLS is a promising method for directing patients quickly into the correct treatment program, but it still has only been tested in a single cohort of patients. As more doctors begin using it, it will be possible to get a clearer measurement of its clinical benefit.

“How we provide care continually evolves as we integrate our research results into the care of patients,” said Dr. Stern. “We are always revamping how we think about gathering information.”