Going the Distance for Epilepsy Relief

Why a Kansas family chose to see UCLA doctors four times a year.

Brock Graham of Hiawatha, KS, has a rare form of epilepsy. Photo courtesy of Mandy Graham.

That was the experience for Mandy Graham, mother of 13-year-old Brock Graham. Brock has Lennox–Gastaut syndrome, a rare form of childhood epilepsy that is difficult to diagnose, causes multiple types of seizures and is resistant to many medications.

The Grahams spent years seeking treatments, pleading with their insurance company and switching medications for any kind of relief for Brock’s symptoms.

“We really thought we were getting top-notch care,” Mandy Graham says. “We didn’t know any differently back then.”

The Grahams live in Hiawatha, Kansas, a small town near the borders of Nebraska and Missouri. The closest children’s hospital is about a two-hour drive across state lines in Kansas City, Mo.

Their journey to the Adolescent Epilepsy Center at UCLA was part chance, part determination, and a whole lot of commitment.

When Brock was 3, his parents noticed what they believe was his first seizure.

“I was home on maternity leave with our youngest, when Brock bumped his head and had this funny look on his face. We thought that his fall was the cause of the seizure,” Mandy Graham says.

The Grahams took Brock to the nearest children’s hospital where he was seen by a neurologist and given an electroencephalogram (EEG), a test used to evaluate the electrical activity in the brain.

“The whole time they kept telling us it was nothing to worry about,” Mandy Graham says.

Three days later, a nurse called to inform them that Brock had epilepsy and to recommend scheduling an appointment with their local doctor. Brock was diagnosed with generalized epilepsy and put on a common medication that initially seemed to reduce his seizures.

Two months later, however, the Grahams noticed that the side effects of the medication were causing disruptive behaviors in Brock.

The doctors switched his medications, but then the seizures became more frequent. In fact, Brock had to be airlifted to the hospital in Kansas City a number of times for doctors to address his uncontrollable seizures.

“We couldn’t afford to fly back all the time,” his mother says. “He was at this point where he was having up to 200 seizures a day and it felt like nobody was really doing anything for him.”

Without much relief from medications, doctors eventually put Brock on a ketogenic diet. For some epilepsy patients, the high-fat, low-carbohydrate diet can help eliminate seizures altogether. 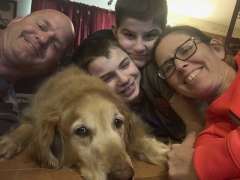 While the Grahams were happy to see the seizure frequency reduced, they noticed their son’s personality had changed.

Brock went from being a happy and playful child to living in a constant state of sedation, notes Mandy Graham.

Still, the family followed the new diet and medication protocol for three years, until Brock was fit for vagal nerve stimulation (VNS) therapy.

VNS therapy, in which an implanted stimulator device sends regular, mild pulses of electrical energy to the brain to slow or stop seizures, is an “add-on” treatment used in addition to medicines for those that may not be candidates for surgery. The procedure is typically performed in children after the age of 4 and requires evaluation by neurologists for approval.

The therapy reduced Brock’s seizures by 25% two weeks after placement. However, using the device increased his fatigue and led to further changes in his personality and attitude.

A trip to California

The Levys had experienced their own struggles with epilepsy, when their daughter Sofie had her first seizure at age 5. Like Brock, Sofie was on many medications and had many misdiagnoses. It took about three years for the Levys to find answers on how to treat her, during which they ended up at UCLA Health.

Sofie was evaluated by neurosurgeon Gary W. Mathern, MD, co-director of the UCLA Pediatric Epilepsy Surgery Program and Raman Sankar, MD, PhD, FAAN, FAES, chief of the Division of Pediatric Neurology. It was decided that she should undergo surgery for the removal of what her family referred to as the “troublemaker,” a lesion on her brain and the cause of her focal dyscognitive seizures. Since then, she has remained seizure-free for 11 years.

Though not all children with epilepsy are candidates for surgery to eliminate their seizures, many can see major improvements to their quality of life from the vast array of medications and treatments available.

That’s what made Brad Levy suggest the Grahams get a second opinion on Brock’s condition when Mandy Graham expressed how hopeless she felt.

“I tell everyone, if your child is not seizure free, has failed a few medications, you have not been told about surgery, implants, diet and other possible treatments that could get better seizure control — then run, don’t walk, to the nearest level 4 epilepsy center, and only see an epileptologist,” he says.

Levy helped set the Grahams up with an appointment to see Jason Lerner, MD, FAES, pediatric neurologist, epileptologist and director of the Adolescent Epilepsy Center at UCLA.

The Grahams were hopeful, but felt uneasy about committing to receiving care from a team so far from home. To them, it felt like just another round of tests with the anticipation of being told there wasn’t much the new physicians could offer Brock.

“When we first met with the doctors, I didn’t think we would be able to make this work,” Mandy Graham says, “but here I am, now calling them the best doctors ever!”

The Adolescent Epilepsy Center at UCLA helped the Grahams establish a care plan unique to their needs. Since becoming part of the UCLA family, Brock has changed medications, has a different diagnosis and is managing his diet with the help of dietician Sarika Sewak, MPH, RD.

Some children are very sensitive to the diet protocols. For Brock, his food is measured in grams and the slightest change can make a difference in his seizure frequency. His mother says it’s taken Brock one step closer to seizure freedom, reducing his seizures by 50%.

Dr. Lerner and his team also helped the Grahams fine tune the VNS device, which has brought more balance into Brock’s daily life.

Mandy Graham says working with UCLA Health is like learning from the actual instructors versus being handed a book and expected to learn from it. “UCLA actually knew the program and it felt like our old hospital and doctors were just handing us the program to learn on our own.”

Most of all, she says Dr. Lerner and his team have made her family feel safe to ask questions and to have an active role in their son’s care plan.

“We experienced years of being told that all the things we were doing were wrong and that wore on us,” Mandy Graham says. “At UCLA, they respected us. They gave us encouragement and validated our concerns.”

Worth the distance, worth the care

Even after six years with UCLA Health, the Grahams still get excited for their trips to California.

“I always tell my family, this is the craziest thing that we do,” Mandy Graham says, “but then I get an email from Dr. Lerner or the dieticians and it all just reminds us, this is why we do this.”

Dr. Lerner acknowledges that for many families, finding individualized care can be difficult.

“There’s a lot of work that goes on behind the scenes, with insurance and travel,” he says. “Though it can be a lot for families who live out of state, we may be offering something that they can’t get where they live — and so for them, it’s worth it.”

For the Grahams, the smile on Brock’s face is reason enough to make the trips.

“My biggest hope for Brock used to be seizure freedom,” his mother says, “but it’s actually quality of life. I just want him to enjoy life.”

Jocelyn Apodaca Schlossberg is the author of this article.