From time to time, we'll profile a Department of Neurology lab and the important work it's doing in the field. Today we're highlighting the work of Dr. Jason Hinman and his team... 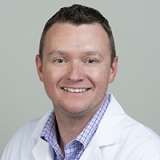 What do you research and what are some of the projects that your lab is currently working on?
HINMAN: My laboratory focuses on the interface of stroke, cerebrovascular disease, and dementia. We have a number of projects ongoing in the lab that use cutting edge techniques and range from identifying new molecular pathways relevant to this disease interface, as well as drug discovery programs targeting those pathways. We work on understanding not only preclinical models of stroke and dementia and understanding the pathways, but also how those diseases interact with each other in human patients. A major goal of the lab is to identify reparative pathways that can reduce the burden of these disorders.

In 2019, we identified that a particular type of stroke that occurs in the deeper parts of the brain, often referred to as a lacunar stroke, may activate a pathway implicated in Alzheimer’s Disease. This form of subcortical stroke triggers the activation of an enzyme called MARK4 that phosphorylates a protein referred to as tau. In Alzheimer's disease, tau accumulates in the brain, and MARK4 plays an important role in facilitating that accumulation. So, at the interface of a preclinical model of a common type of stroke, we find activation of an enzyme that is known to phosphorylate a key protein that accumulates in the brains of patients with Alzheimer's disease. And so right now we're working to identify new small molecule inhibitors, working together with the drug discovery lab at UCLA, and then employ those in a model of stroke and vascular dementia to see if we can develop new therapeutics in this area. 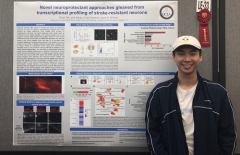 The second major initiative that we're working on in the lab is identifying strategies to deploy those new therapeutics. That requires knowing which patients are the best candidates for intervention. This can be very complicated in patients with vascular cognitive impairment as the damage to the brain has a long trajectory and often develops without symptoms initially. And to do that we utilize biomarkers. Based on technology we developed to profile chronically injured blood vessels, my lab is focused on identifying circulating or blood-based biomarkers that can identify patients with vascular dementia. And we're currently leading a major initiative in a national effort called MarkVCID that is focused on identifying novel imaging, blood-based, and cognitive measures that can identify these patients who are at high risk for vascular dementia.

Could you tell me about your team?
HINMAN: Our lab group is dynamic. Over the years, we've had high school students, undergraduates, medical students, rotating graduate students, postdoctoral fellows, neurology residents, and neurology fellows working on various projects in the laboratory. I find that that dynamic interaction of people at different levels of training really brings energy to the lab, and we try to harness that energy and feed it into our research. At lab meetings and during informal discussions, we utilize those contributions and new ideas to push projects forward. That's one of the best things about being in the neuroscience environment at UCLA. The best recent example of that is that we used an existing model we had in the laboratory to jump into SARS-CoV-2 research. SARS-CoV-2 infections have this interesting phenomenon in which they are oftentimes associated with stroke, and that interaction is not well understood. So, we utilized our model to jump into that research and we're going to have two new papers coming out in the next month about that. 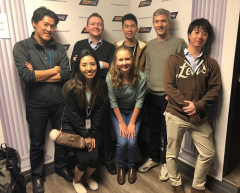 The lab circa 2017 after an escape room adventure

Where do you see the trajectory of your research going?
HINMAN: I'm really hopeful that we can make some significant discoveries of new molecular pathways that will translate directly into therapeutics. The great thing about being at UCLA is that you have the opportunity to run with those ideas all the way through. That's a unique aspect of our department — we have a drug discovery lab, we have Nobel Laureates who can help you solve critical technical challenges, and more. And if you conduct your research with a disease focus like we try to do, then you can really push out new advances in diagnosis and treatment for patients who need them.

What is the best case scenario of this research?
HINMAN: I think within the next few years we're going to have new tools to identify patients who are at risk for vascular dementia before they become overtly symptomatic. And I'm hopeful that our work will lead to one or more treatments and we can start to test whether they're effective in those particular patients.

What do you anticipate to be the most significant advancement of neurological research and care in the next 10 years?
HINMAN: I think we're very close to having therapeutic advances that can help repair the brain after injury. That can apply to any number of diseases, but the ones that we’re focused on, including stroke and dementia, are the two most common neurologic diagnoses and very difficult to address. However, I do think that we are just a few years away from having new therapeutics that can try to repair the brain after a stroke. Then we're not far off from new drugs to try to mitigate the effects of dementia and possibly repair the brain during the period when it's degenerating. It could be through drug treatments, or it could be through new neural interfaces where the signals that come from the brain can be read and interpreted and fed back into the brain. And in the case of recovery from disability after stroke, it could be through robotic assistance. I think all those things are on the table. If we can make those early advancements, even if they're only partially effective, they can be game changers for patients.

Could you elaborate on the R25 program here at UCLA?
HINMAN: The NINDS R25 program has been really critical for training physician scientists. The idea is to bridge a critical period for folks who have been interested in science during their undergraduate and graduate training programs but step away from science to complete their medical training including medical school, residency, and fellowship. They often have a hard time finding their way back to the bench, despite having considerable talent and expertise in certain areas. And so the program is designed to provide a structure to bridge that gap and allow people to focus their energy on disease-related research that can lead to new advancements.

Nationally, the programs have been quite successful, and it has been particularly successful at UCLA. We're fortunate to have an abundance of good mentors who have done this before, both in their own careers and then as mentors. The program has been around long enough now that our mentors, myself included, have been mentored through the program onto faculty positions, not only at UCLA but also at other institutions. That has been particularly helpful in allowing us to connect with other institutes. If individuals want to transfer for fellowship because they want to work in a particular area with an expert at another institution, they can do that. And also on the career advancement level, having that network has provided opportunities for early career advancement by knowing folks at other institutes who have come through our program.

Dr. Hinman refers to his lab group as “dynamic”. Here’s some insight from a few of them… 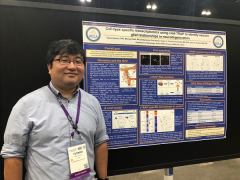 What interests you about this topic that you're studying?
YUTARO: My main project that I'm working on is the effects of vascular abnormalities on Alzheimer's disease and dementia. My project is focused less on large scale vascular events like stroke and more on what we call microvascular events, like mini strokes or micro strokes. These things wouldn't normally cause behavioral changes, but we think they can still cause problems in the brain and other areas, cascading into things like Alzheimer's disease. Alzheimer's disease affects a lot of people throughout the world. Working towards finding even some small pieces of knowledge about Alzheimer's disease, even if it’s not the cure, is meaningful. We as researchers are collectively building the blocks towards the cure for Alzheimer's disease, and I’m excited to be a part of that.

What do you like about working in the Hinman Lab?
YUTARO:  I like that we're a pretty small lab, so we’re very tight knit and we spend a lot of time together. We all have our own projects, but it's great to be able to bounce ideas off of each other and receive feedback.  It’s also nice to troubleshoot things, too. If you have trouble with something you can just ask someone else, and so on. And that's true for Dr. Hinman as well. He really likes to contribute, and I like how we can chat with him about the progress we're making and get some feedback. 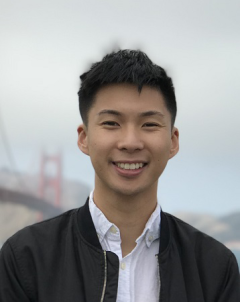 Could you tell me about your role in the Hinman Lab?
BRIAN: I'm a third-year undergraduate in the Hinman Lab and my main project is assessing the role of a gene called Sarm1 in potentially modulating neuronal survival after stroke injury. My work on the project ranges from cell culture to imaging analysis. It's been shown that knockout of Sarm1 prevents traumatic degeneration of axons. We were interested in whether this was true after stroke, and we found that it not only protects axons but also demonstrated increased neuronal survival. This led us to look for a compound that may be able to promote neuronal survival after stroke.

What have you learned in the Hinman Lab?
BRIAN: What haven’t I learned? [Laughs] Honestly, I’ve learned everything that pertains to my current project through the lab. I came from a clinical lab, so there wasn't much hands-on experience that I was able to learn. Most of my previous wet lab knowledge came from my lab classes, which wasn’t much. Though I do appreciate that everything I learned from my classes is directly applicable to my project responsibilities. Being in the Hinman Lab has given me the extensive research experience that I was looking for. I honestly don’t think I could have gotten this far without the help of Dr. Hinman and the rest of our team.