‘It’s given me new abilities and new ways of doing things. It basically transformed my life,’ says Arul Venkatesh. 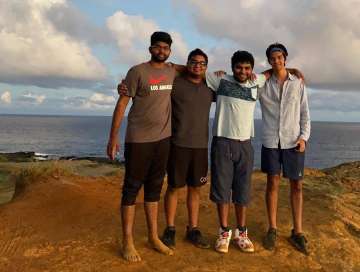 All Arul Venkatesh wanted was to have a normal life: to go to school, to have friends, to pursue his interest in cars, and — most of all — to find relief from the debilitating seizures that confined him to his bedroom, unable to function.

Venkatesh, 20, is one of about 65 million people worldwide living with epilepsy, making it the fourth most common neurological disorder, according to the Epilepsy Foundation. His journey took eight years and countless visits to some of the country’s finest doctors until he found the specialized treatment provided at UCLA Health that transformed his life.

Epilepsy is characterized by uncontrollable seizures and affects people of all ages. Venkatesh’s seizures began around age 12 and occurred primarily during the night.

“Usually, unless they were really bad, I wouldn’t wake up,” recalls Venkatesh, who grew up near San Jose. “But they screwed my entire next day up. It would be hard to plan anything.”

The seizures became so debilitating that Venkatesh’s parents had to take him out of middle school and begin home hospital care. “I’d say that was very isolating. It was honestly terrible.”

In high school, Venkatesh made friends, but he was unable to experience activities other kids did because of his fear of seizures. His schoolwork suffered. “Yes, I passed my classes and graduated with my grade, but I wasn’t able to fully enjoy learning at school just because it was such an interference in my life.”

Venkatesh and his family sought help at some of the most prestigious medical centers on the West Coast. He was prescribed a variety of medications to alleviate his seizures, but nothing helped — until the family was introduced to Dr. Raman Sankar, MD, PhD, FAAN, FAES, professor and chief of pediatric neurology at UCLA Health.

Focal epilepsies such as the type Venkatesh had are characterized by seizures arising from a specific part, or lobe, of the brain. In Venkatesh’s case, his epilepsy was confined to a relatively small piece of the brain next to the motor cortex, which controls movement on the right side of the body.

“The problem was nobody could localize his epilepsy very well, and when he came to me the family was very frustrated,” Dr. Sankar says. Once he was able to find the source of the epilepsy, Dr. Sankar believed Venkatesh was a good candidate for surgery.

As with each pediatric patient with drug-resistant epilepsy treated at UCLA, the presurgical data was presented to a group of neurologists, neurosurgeons, neuroradiologists,

neuropsychologists and a nursing team, who after reviewing the unique elements of Venkatesh’s case, arrived at a consensus for treatment.

That was in 2014. At that point, Venkatesh was still experiencing seizures, but most torturous, he says, were the auras that sometimes accompany the disorder. The aura is generally the first part of a focal seizure before consciousness is impaired. It can manifest as visual changes, such as seeing bright or flashing lights; or hearing voices, a buzzing or a ringing sound. It can also generate a feeling of déjà vu or panic, an unpleasant smell or taste, or rapid emotional changes.

Venkatesh says the auras never resulted in a seizure, but they made it difficult for him to function because he was afraid one would occur while he was walking. “It was super bad. I wouldn’t leave my room because I was scared of the aura.”

A few years earlier, while Venkatesh was being evaluated for surgery at another center, the physician cut back on his medication to perform some tests, which resulted in violent and uncontrollable seizures. This contributed to his and his parents’ reluctance to consider surgery, Dr. Sankar explains.

“It took several years to get him to this point where he was willing to undergo evaluation (for surgery) again,” he notes. “In the meantime, I provided a lot of support and fine tuning of medical management. That’s what we did for several years. Then, finally, toward the end of last year, he realized his quality of life was dramatically impaired.”

“I decided there’s no option other than surgery because I don’t want to live life like this,” Venkatesh explains. “I’d rather they try anything they think would work than not being able to use my body and being stressed about the aura.” That realization proved to be a turning point. In February, led by Dr. Aria Fallah, MD, a pediatric neurosurgeon at UCLA Health, Venkatesh began a two-stage operation at UCLA Mattel Children’s Hospital. The first surgery was a craniotomy, in which his skull was opened to insert a subdural grid and electrodes for brain mapping. A second surgery removed a small piece of his frontal lobe that was causing the seizures.

“It was done by Dr. Fallah brilliantly, “Dr. Sankar says. “We narrowed that part that needed to come out to a really small area, so his motor function is normal. We figured it was coming from a region that would affect his right leg and we were able to piece out the functional part from the part that was causing epilepsy.”

Venkatesh remained in the hospital for a week and then underwent rehabilitation to get the right side of his body functioning again. “It was pretty much a miracle,” Venkatesh says about the surgery. “It completely cured me. It’s given me new abilities and new ways of doing things. It basically transformed my life, quite honestly.”

Dr. Fallah notes that many hospitals are not equipped to perform the highly specialized brain-mapping procedure that UCLA does.

“We spent time studying his brain and the way it’s configured to be able to remove a relatively small piece of brain. Also, where this was located is right next to a motor cortex, so if we don’t do the study carefully, it’s easy to cause a greater problem than we started with. If you don’t have available these techniques and a whole team that can analyze this type of data, you can’t do this type of surgery.”

Epilepsy surgery has been around for more than a century, Dr. Sankar says, and the procedures are extremely safe.

“What really has improved is the finesse with which we do this,” he says. “Some of the mapping and that kind of technology didn’t exist before, but now it does.”

About 10 months after the surgery, Venkatesh is seizure-free and no longer needs medication. He is enrolled as a junior at Santa Clara University, has a girlfriend and enjoys racing his spec Miata on weekends. He plans to continue racing but he hasn’t settled on a career goal yet.

“I just want to enjoy my life,” Venkatesh says, adding that he has a message for those still suffering epileptic seizures: “You aren’t alone; keep on persevering. Life might be unbearable now, but there is a light at the end of that dark tunnel.”

For more information about epilepsy care at UCLA, click here.