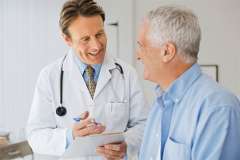 Friedrich Nietzsche is not popularly associated with ironic humor. People do slow down with age, and this can be a source of witty commentary. Most people worry about the increased incidence of dementia in aging, because dementia sharply increases with age: by 85 almost one-third of the population will have dementia. Neurologists now recognize that dementia is not just Alzheimer’s disease, but instead is often a combination of factors.

“The advantage of a bad memory is that one enjoys several times the same good things for the first time.” —Friedrich Nietzsche

This is called “mixed dementia,” because the symptoms of forgetfulness and mental slowing may be due to not just the damage from Alzheimer’s or other dementias, but also to small strokes. UCLA Neurology provides diagnosis and care for dementia in its Dementia and Memory Disorders Clinic within the Mary S. Easton Center for Alzheimer’s Disease Research at UCLA. To push for treatments for dementia, researchers at UCLA are identifying the mechanisms of mixed dementia and how to treat it. One component of mixed dementia is an accumulation of small strokes in the parts of the brain that connect different areas. This part of the brain is called the “white matter.” Stroke in the brain’s white matter increases with age, occurs with increased frequency in Alzheimer’s disease, and accelerates it. UCLA Neurology’s

Dr. S. Thomas Carmichael has determined that white matter stroke turns on a process of brain repair in its early stages, but then this process stalls. His research team identified a set of molecules that are increased by white matter stroke in the aged brain and prevents recovery. The team then promoted recovery in scientific models with white matter stroke by delivering an experimental therapy that blocks these molecules. This research points the way for a new therapeutic approach for dementia.