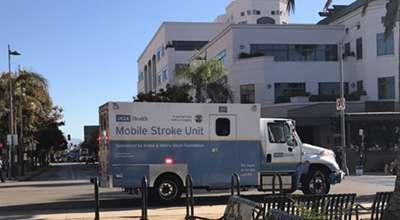 In response to a motion that Supervisor Mark Ridley-Thomas and I introduced on April 17, 2017 regarding the feasibility of implementing a mobile stroke unit program through the County, the Department of Health Services (DHS) provided a set of potential options on June 1, 2017. One of these options was to support the Mobile Stroke Unit (MSU) pilot program that is being implemented by the UCLA Medical Center. Read more >

For stroke victims, time is a matter of life and death, and a new LA-based pilot program may help them to start getting treatment faster, NBC4 media partner KPCC reports. Read more >

As part of a Los Angeles County mobile stroke study, the Santa Monica Fire Department (SMFD) has teamed up with UCLA to respond to 911 calls for service involving a possible stroke. The project uses a modified ambulance equipped with a mobile CT scanner to diagnose and start treating stroke patients while they are still en-route to the hospital. Read more >

When people suffer a stroke, their brain is deprived of oxygen. That’s how a stroke occurs – the blood vessels either become blocked, stopping or restricting blood flow to the brain, or the blood vessel bursts and deprives the brain of blood. As a result the brain slows and shuts down from lack of oxygen. But it doesn’t happen all at once. If caught and treated early enough, the brain can remain functional and recuperate. Read more >

SANTA MONICA—California’s first-ever Mobile Stroke Unit was deployed on Thursday, September 14 paving the way for a new approach to deal with medical emergencies.

The $1.46 million pilot program was approved by the Los Angeles County Board of Supervisors on June 20, 2017. The Santa Monica Fire Department is now partnering with UCLA to release the emergency vehicle to the public. The Mobile Stroke Unit acts like an ambulance, but it is equipped equipped with a mobile CT scanner to diagnose and start treating stroke patients while they are still en-route to the hospital. Read more >

UCLA Health’s mobile stroke unit is officially designated as a mutual aid resource, to allow for the provision of innovative stroke care between exclusive operating areas in LA County

This report is in response to the June 20, 2017 Board Motion by Supervisors Hahn and Solis instructing the Director of Health Services and the Fire Chief to report back to the Board on how to implement a mutual aid agreement, so that the mobile stroke units can work with all ambulance companies that have contracts with the County. Read pdf document >