Survival rates for advanced stage ovarian cancer have not changed significantly in the past 40 years, and ovarian cancer remains the most lethal gynecologic cancer in women. Our goal is to change the status quo by developing new paradigms in the laboratory and efficiently translating them into the clinic. The most common type of ovarian cancer, and the one that accounts for the majority of deaths, is serous papillary carcinoma. Approximately 20 percent of patients with this ovarian cancer subtype are intrinsically resistant to chemotherapy or develop chemoresistant disease within one year from initial treatment. A reliable method to identify these poor prognosis patients would facilitate their inclusion into clinical trials or personalized treatment strategies at an earlier point. The lack of reliable biomarkers and curative treatment strategies for ovarian cancer inspired our work, which is aimed at identifying biomarkers for early detection, prognostication, and personalization of therapy. 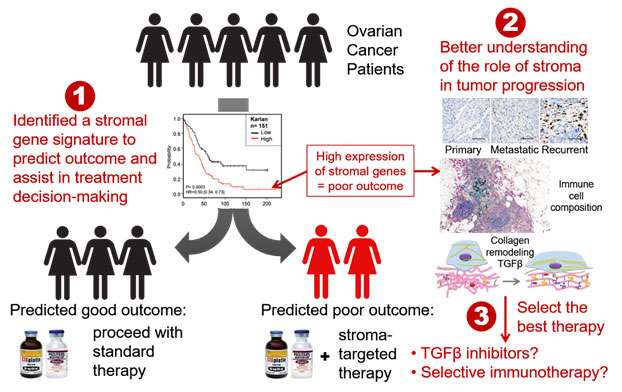 The study of ovarian carcinogenesis has been limited by the lack of appropriate immuno-competent syngeneic mouse models that recapitulate genetic changes in human ovarian carcinoma. The Orsulic Laboratory has engineered multiple mouse ovarian cancer cell lines with defined genetic alterations that are frequently present in human high-grade serous ovarian cancer. One example is the FVB-syngeneic mouse ovarian cancer cell line BR5-Luc with combinations of genetic alterations in p53, Brca1, myc, and Akt. The tumors in this model are infiltrated with the host stromal cells while the luciferase and HA tags allow for convenient visualization and quantification of cancer cells by whole animal imaging and immunohistochemistry. Several features of this model make it suitable for studying microenvironment dynamics during ovarian cancer progression, such as:

We have shown that this ovarian cancer model recapitulates human serous histology, pattern of metastatic spread, and response to standard and targeted therapies. In collaboration, we have analyzed immune cell infiltrates, including CD4+ and CD8+ T cells, B cells, NK cells, CD4+ Treg cells, tumor-associated macrophages, and MDSCs, and demonstrated the utility of this model in studying the effects of therapies on the composition of major immune cell types. For example, we have shown that targeting the CXCL12/CXCR4 axis results in the selective reduction of intratumoral FoxP3+ Treg cells and a marked increase in T-cell-mediated antitumor immune response. We have also demonstrated that the efficacy of anti-CTLA-4 therapy is greatly potentiated in combination with decitabine, which promotes the differentiation of naïve T cells into effector T cells and prolongs cytotoxic lymphocyte responses. In addition to this FVB-syngeneic model, we have recently developed a C57BL/6-syngeneic mouse ovarian cancer model. 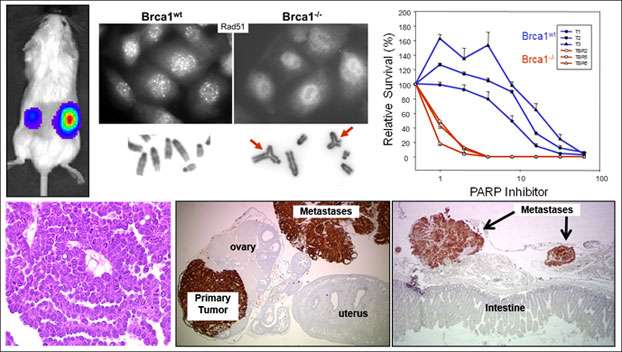 Immunotherapies have demonstrated remarkable efficacy as anti-tumor agents in some patients; however, it is unclear why the majority of patients are unresponsive to immune activation. Recent evidence suggests that immune cells can both promote and inhibit tumor progression depending on the signals received from the tumor microenvironment. The two prevalent cell types in the tumor stroma are immune cells and cancer-associated fibroblasts (CAFs). The percentage of CAFs increases during tumor progression and correlates with poor survival. There is compelling evidence that CAFs may interfere with the anti-tumor immune response by changing the landscape of immune cell infiltrates in tumors. CAFs secrete a dense extracellular matrix that traps immune cells, thus physically restricting their access to tumor islets. CAFs are also a rich source of biologically active molecules that attract or repel certain immune cell types. We are testing the hypotheses that the accumulation of CAFs during tumor progression skews the immune infiltrates toward the immunosuppressive profile and that this state can be reversed with CAF-targeted therapies. A systematic characterization of specific immune cell types that are affected by targeting CAFs may provide new approaches to enhancing immunotherapeutic efficacy and improving response rates in ovarian cancer patients. 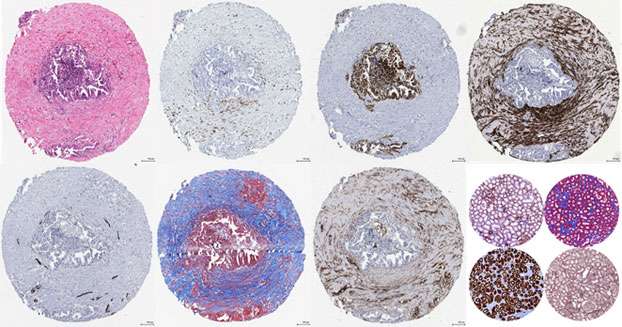 Germline BRCA1 mutations have been associated with increased risk of high-grade serous ovarian cancer as well as early onset of cancerous transformation in the fallopian tube. BRCA1 mutations have also been associated with accelerated reproductive aging and premature infertility due to reduced oocyte reserve. In mouse models, the loss of BRCA1 function resulted in brain development and heart regeneration defects, suggesting that BRCA1 heterozygosity may be associated with a systemic defect in tissue maintenance. We hypothesize that normal fallopian tubes from BRCA1 mutation carriers have unique molecular and histomorphometric features that underlie the early onset of cancerous transformation. Our goal is to integrate multidimensional image analysis, RNA sequencing, and clinical and demographic data to identify specific features that may generate a pre-cancer microenvironment in BRCA1 mutation carriers