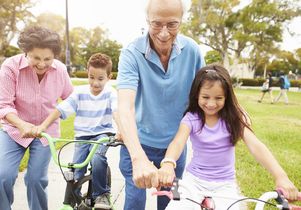 A UCLA study is the first to show that Latinos age at a slower rate than other ethnic groups. The findings, published in the current issue of Genome Biology, may one day help scientists understand how to slow the aging process for everyone.

“Latinos live longer than Caucasians, despite experiencing higher rates of diabetes and other diseases. Scientists refer to this as the ‘Hispanic paradox,’” said lead author Steve Horvath, a professor of human genetics at the David Geffen School of Medicine at UCLA. “Our study helps explain this by demonstrating that Latinos age more slowly at the molecular level.”

According to the Centers for Disease Control and Prevention, Latinos in the United States live an average of three years longer than Caucasians, with a life expectancy of 82 versus 79. At any age, healthy Latino adults face a 30 percent lower risk of death than other racial groups, according to a 2013 study in the American Journal of Public Health.

The UCLA team used several biomarkers, including an “epigenetic clock” developed by Horvath in 2013, to track an epigenetic shift in the genome that’s linked to aging. Epigenetics is the study of changes to the DNA molecule that influence which genes are active but don’t alter the DNA sequence.

Horvath and his colleagues analyzed 18 sets of data on DNA samples from nearly 6,000 people. The participants represented seven ethnicities: two African groups, African-Americans, Caucasians, East Asians, Latinos and an indigenous people called the Tsimane, who are genetically related to Latinos. The Tsimane live in Bolivia.

When the scientists examined the DNA from blood — which reveals the health of a person’s immune system — they were struck by differences linked to ethnicity. In particular, the scientists noticed that, after accounting for differences in cell composition, the blood of Latinos and the Tsimane aged more slowly than other groups.

According to Horvath, the UCLA research points to an epigenetic explanation for Latinos’ longer life spans. For example, the biological clock measured Latino women’s age as 2.4 years younger than non-Latino women of the same age after menopause.

“We suspect that Latinos’ slower aging rate helps neutralize their higher health risks, particularly those related to obesity and inflammation,” said Horvath, who is also a professor of biostatistics at the UCLA Fielding School of Public Health. “Our findings strongly suggest that genetic or environmental factors linked to ethnicity may influence how quickly a person ages and how long they live.”

The Tsimane aged even more slowly than Latinos. The biological clock calculated the age of their blood as two years younger than Latinos and four years younger than Caucasians. This reflects the group’s minimal signs of heart disease, diabetes, hypertension, obesity or clogged arteries, the researchers said.

In another finding, the researchers learned that men’s blood and brain tissue ages faster than women’s from the same ethnic groups. The discovery could explain why women have a higher life expectancy than men.

Horvath and his colleagues next plan to study the aging rate of other human tissues and to identify the molecular mechanism that protects Latinos from aging.

Health and Behavior
37 UCLA scientists among world's most influential researchers
11/23/2020
Clarivate released its annual list of the most highly cited researchers, which includes dozens of UCLA researchers across various disciplines.