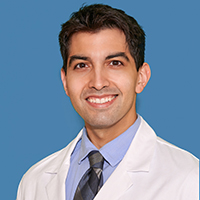 Dr. Ryan Clagg is a primary care physician who practices in Burbank. He is double board certified in Internal Medicine and Pediatrics, which means he treats both adults and children.

Dr. Clagg received his medical degree from Marshall University in Huntington, West Virginia (Go Herd!), where he was born and raised. He completed residency training in both Internal Medicine and Pediatrics at Marshall, where he served as the med-peds chief resident in his final year and was also recognized as “Resident of the Month” in 2020 for his patient care and community service in Huntington.

He received his undergraduate degree from Cornell University in Ithaca, NY (Go Big Red!) After college, he worked in a laboratory in Boston at Massachusetts General Hospital but decided to trade cold weather for the sunshine of Los Angeles.

When he's not in the office, Dr. Clagg enjoys record collecting, watching movies old and new, standup comedy and enjoying the best food LA has to offer. Though he’s new to the West Coast, he is excited to serve the UCLA community (Go Bruins!)