Extensivists can help reduce hospital admissions and improve your quality of life. Call 310-206-6232 to learn more about our extensivist services.

How Team-Based Care Has Kept One Patient Healthy

A few years ago, Shebyon Bedgood, 49, was dealing with an array of health problems that kept her from enjoying her life. “I was constantly in and out of the hospital,” says Bedgood, who lives in Santa Monica. And these weren’t short stays, with some lasting up to three months, with only a week or two at home before she was readmitted.

The culprit was urinary tract infections—a complication of her Type 1 diabetes and a kidney transplant she had a decade earlier. Oftentimes, they would turn into a serious full-body infection, called sepsis, that requires high levels of IV antibiotics to treat. Then she was diagnosed with breast cancer. 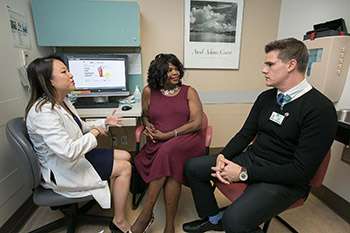 “That was devastating,” Bedgood says, “because I’ve been sick all my life and struggling all my life.” What she really wanted, she says, was to stay healthy enough to spend quality time with her sister, who is a nurse practitioner, her two daughters and her three grandchildren, who are 1, 3 and 9 years old. But being sick all the time made that impossible.

Urged by her family to demand better care, Bedgood transferred from another health system to UCLA Health, where her needs were better addressed. But with 11 specialists and dozens of prescriptions, Bedgood needed more time with her doctor and a higher level of care coordination than what is typical in a primary care practice. So, when UCLA Health launched a new initiative to care for high-risk, complex patients in July 2017, called the Extensivist Program, Bedgood was one of the first patients to join.

“When we met Shebyon, she was not able to get the cancer treatment she needed because of her frequent infections,” says Dr. Sun Yoo, Bedgood’s primary care physician and the Extensivist Program’s medical director. “We came in and asked: ‘Why is this happening? And what can we do to prevent these infections from starting?’”

Dr. Yoo and her team found some simple fixes. First, they altered Bedgood’s antibiotic regimen and changed some other medications. Then, they taught her how to better drain her bladder and spot early signs of infection, like mild chills and fatigue, so that she could get treated right away. They even sent medical students to her home to organize her medications.

Dr. Yoo engaged all of Bedgood’s specialists, including a medical oncologist, an endocrinologist and a urologist, so that they could come up with a unified care plan together. These conversations regularly happened in the evening or over the weekend. Dr. Yoo also made it a priority to stay in contact with Bedgood’s robust support team, which includes nurses, a social worker, a care coordinator and her family.

Within the extensivist program, Dr. Yoo says her team offered Bedgood a whole patient, wraparound approach, which included access to physicians when she had a problem, and access to in-office treatments, such as IV fluids and antibiotics, when she needed them.

The results speak for themselves. In the last 15 months, Bedgood has been hospitalized only twice, and for just a few days each team. She is also now cancer-free, after 68 rounds of radiation, plus surgery and chemotherapy. “Her quality of life has been so greatly improved by taking these steps,” Dr. Yoo says. “She looks better, she feels better, and most importantly, she is able to stay home.”

This change has greatly improved Bedgood’s quality of life. “My family comes and sees me every weekend now,” she says. “It feels like Christmas every time they walk through that door.”