Our specialists offer comprehensive arrythmia care. To learn more about our services, call 310-206-2235.

Amara Yad ( - the immortal hand) is a physician-led initiative with a single goal: to honor the victims of medical exploitation through corrective action.
As its first act, Amara Yad will publish a new generation of open access anatomic atlases, of the highest quality that is free to all and to support the life saving mission of profession.

This book is being published with the support of the Amara Yad project that was started by the UCLA Cardiac Arrhythmia Center, and the Cardiovascular & Interventional Programs of UCLA Health System. 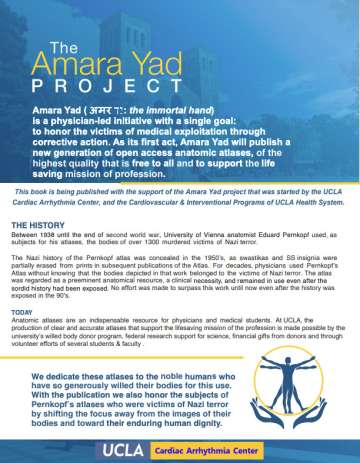 Between 1938 until the end of second world war, University of Vienna anatomist Eduard Pernkopf used, as subjects for his atlases, the bodies of over 1300 murdered victims of Nazi terror.

The Nazi history of the Pernkopf atlas was concealed in the 1950’s, as swastikas and SS insignia were partially erased from prints in subsequent publications of the Atlas. For decades, physicians used Pernkopf’s Atlas without knowing that the bodies depicted in that work belonged to the victims of Nazi terror. The atlas was regarded as a preeminent anatomical resource, a clinical necessity, and remained in use even after the sordid history had been exposed. No effort was made to surpass this work until now even after the history was exposed in the 90's.

Anatomic atlases are an indispensable resource for physicians and medical students.  At UCLA, the production of clear and accurate atlases that support the lifesaving mission of the profession is made possible by the university’s willed body donor program, federal research support for science, financial gifts from donors and through volunteer efforts of several students & faculty.

We dedicate these atlases to the noble humans who have so generously willed their bodies for this use. With the publication we also honor the subjects of Pernkopf’s atlases who were victims of Nazi terror by shifting the focus away from the images of their bodies and toward their enduring human dignity.