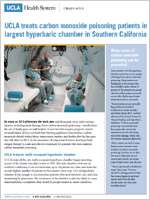 As many as 40 Californians die each year and thousands more suffer serious injuries, including brain damage, from carbon monoxide poisoning-mostly from the use of faulty space or wall heaters. A new law that requires property owners to install alarm devices on fossil-fuel-burning appliances that produce carbon monoxide should reduce those unnecessary injuries and deaths after the law goes into full effect in 2013. In the meantime, it's important to know that hyperbaric oxygen therapy is a safe and effective treatment for patients who have suffered carbon monoxide poisoning. Read more 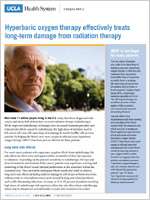 More than 11 million people living in the U.S. today have been diagnosed with cancer, and about half of them have received radiation therapy (radiotherapy). While improved radiotherapy techniques have increased treatment precision and reduced side effects caused by radiotherapy, the high doses of radiation used to kill cancer cells may still cause long-term damage to nearby healthy cells in some patients. By helping the blood carry more oxygen to affected areas, hyperbaric oxygen therapy (HBOT) has been proven effective for these patients. Read more 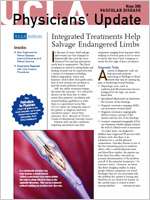 In the past 30 years, limb salvage and wound care has changed so dramatically that even the most advanced foot and leg ulcerations rarely lead to amputation. The blood circulation so critical to saving limbs and healing wounds can be improved with a variety of techniques including balloon angioplasty, stents and bypasses, which allow skin grafts and a host of new wound care products to heal the newly perfused wound. Still, the earlier treatment begins, the better the outcome. Patients with vascular conditions requiring assessment may have symptoms ranging from leg pain when walking or forefoot pain at rest to sores or ulcers that won't heal. Gangrene is rarely the first sign of poor circulation.
Read more