We treat pituitary tumors using the latest innovations in minimally invasive procedures. To connect with an expert in the pituitary tumor program, call 310-825-5111.

Our providers
Request an appointment
Our locations 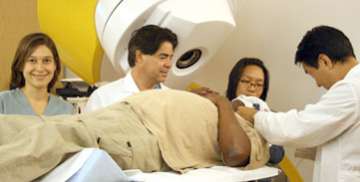 The precision of Novalis Shaped Beam Surgery stereotactic surgery system allows UCLA neurosurgeons to deliver highly focal radiation to a tumor with minimal or no damage to vital areas of the surrounding brain.UCLA brain tumor surgeons and neuro-oncologists collaborated closely with the physicians in the Stereotactic Radiosurgery Program. 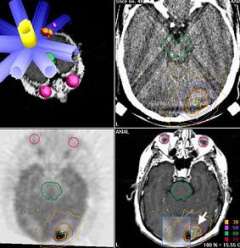 Stereotactic radiosurgery: The upper left image shows a treatment plan in which beams of radiation (in blue) are all directed at a tumor target at various angles around an arc. The diameter of each beam is based on the cross-sectional size of the tumor from that direction. Note that certain radiation sensitive structures do not have radiation passing through them, including the brainstem (green) and eyes (lavender). The other three images (upper right, CT; lower left, PET; and lower right, MRI), show how UCLA doctors can use imaging information from many different types of advanced diagnostic imaging machines for the best treatment planning of this target (arrow). 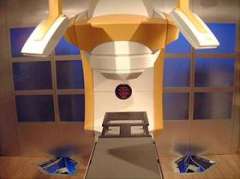 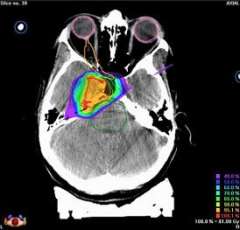 Conformal radiation rose relivery with Novalis. This CT image shows the how this pear-shaped tumor, outlined with a thin red line, can be evenly dosed with the appropriate amount of radiation (in the 90th percentile of the prescribed dose, or the yellow area) in a manner that matches the shape of the tumor. A similar treatment plan would not be possible with Gamma Knife.

Indications for stereotactic radiosurgery or radiotherapy