What is a Chiari malformation?

A Chiari malformation (named after an Austrian pathologist Hans Chiari) is a congenital hindbrain condition.  This means that it is present at birth and is related to a defect at the back of the head where the brain meets the spinal cord.

What are the different types of Chiari Malformation? 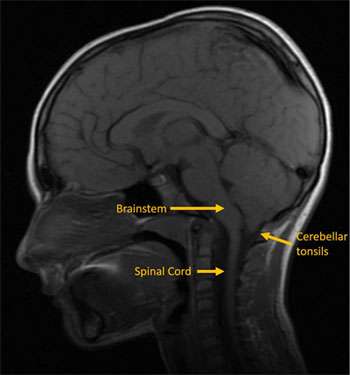 Chiari type 1 malformation is the most common type.  It is the least severe and often diagnosed in late childhood or early adulthood.  It is characterized by downward decent of the cerebellar tonsils into the foramen magnum (the opening at the base of the skull through which the brain connects to the spinal cord).  This results in pressure and impaction of the brainstem, spinal cord and cerebellum and can interrupt normal flow of brain and spinal fluid through this region.

Chiari type 2 malformation is less common and more severe than type 1.  It is always associated with myelomeningocele (this is a birth defect in which the baby’s spinal cord is not formed properly).  It not only involves a herniation of the cerebellar tonsils into the foramen magnum but also the lower aspect of the brain stem.  It is rare for children with Chiari type 2 to require an operation.  If they do, it is commonly due to dysfunction with breathing and swallowing.

Chiari type 3 and 4 are exceedingly rare and are generally incompatible with life and therefore, unlikely to be clinically relevant.  The former is associated with the herniation of the cerebellum into a myelomeningocele while the latter is associated with cerebellar agenesis.

How common is a Chiari malformation?

With routine use of CT scans and MRIs, Chiari malformations are being detected with increasing frequency.  Chiari type 1 is found in 0.1 to 0.5% of the general population with it occurring slightly more commonly in females.  This equates to approximately 1 million people in the United States.  Chiari type 2 is found in all children with myelomeningocele.  Chiari type 3 and 4 is exceedingly rare as this condition is commonly not compatible with life.

Can a Chiari progress from one type to another?

No, a Chiari does not progress.  The different Chiari types are thought to occur via separate pathophysiological mechanisms and in fact have very little in common other than sharing a name.

What are the common causes of Chiari?

The exact causes of Chiari malformation are unknown.  It is hypothesized that problems during fetal development may be associated.  Theories suggest that exposure to hazardous chemicals, improper nutrition, infection or drug/alcohol consumption may be related.

There is some evidence that Chiari malformations can run in families.  This suggests that there is a possible hereditary cause.  This is still under investigation.

What are the symptoms of Chiari?

Chiari malformations are very commonly found incidentally which means that they can have no clinical consequence.

If they were to become symptomatic, common symptoms include headaches, neck pain, unsteady gait, poor hand coordination, numbness and tingling of the hands and feet, weakness of the hands or feet, dizziness, difficulty swallowing, abnormal breathing, speech problems or scoliosis (abnormal curvature of the spine).

Are there any non-surgical treatments available for a Chiari malformation?

If the only symptom is that of headaches and/or neck pain, your doctor may prescribe pain medications and may refer you to a pediatric headache specialist.  However, there are no other effective non-surgical treatments for a Chiari malformation.

Do all Chiari malformations require an operation?

No.  In children who do not have any symptoms, we prefer to observe these patients with close clinical follow-up and serial MRI imaging to ensure that the Chiari does not progress.  In children who are not symptomatic but show signs of worsening cerebellar herniation, development or progression of syringomyelia or early hydrocephalus, we suggest a strong consideration for surgical treatment.  In children that are symptomatic from a Chiari, we recommend surgical treatment.  The recommendation for surgery will always be made after careful consideration of the risks of surgery in balance with the risk of not performing surgery.

What are the possible complications of not treating a symptomatic Chiari malformation?

Are there risks to waiting if my child is symptomatic from a Chiari malformation? 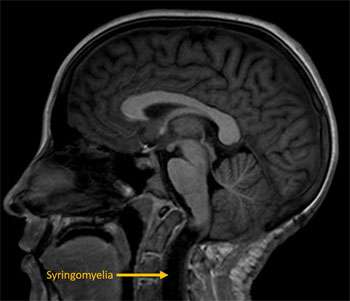 Yes.  Although surgery can very effectively reduce or alleviate certain symptoms associated with a Chiari malformation, it will not be able to reverse any damage that has been caused irreversible nerve injury.

What tests may be performed to determine if a surgery is required?

The diagnosis of a Chiari malformation is commonly made following a brain MRI.

In children, a Chiari malformation can be associated with other abnormalities of the skeleton where the skull meets the spinal canal.  In these situations, a high resolution CT scan may be required to better understand the anatomy as it relates to surgical planning.

What are the different types of surgery offered for Chiari malformations?

The most important goal for surgery for a Chiari malformation is to alleviate the pressure of the cerebellum from the brainstem and spinal cord by uncrowding this area.  It is also important to restore the normal flow of brain and spinal fluid at the level of the foramen magnum.

There are many different types of surgery being offered for Chiari malformations all of which include removing the bone at the base of the skull as well as part of the first spinal segment.  These operations have varying probabilities of success.  In general, our approach has been to remove the compressing bone, open the underlying dura (covering of the brain), microscopically release the adhesions and suture in a patch to create more space at the back of the head to ensure normal flow of brain and spinal fluid.  In our experience, we have had excellent success rates in successfully treating Chiari malformations with only one operation.  This operation ensures us that all our surgical goals can be accomplished.  The decision to open the dura may be made upon a number of factors including the child’s age, symptoms and the presence or absence of syringomyelia.  We encourage you to discuss the various operations with your neurosurgeon during your consultation.

What are the risks of surgery for Chiari malformations?

At experienced centers, the risks are very low but include the possibility of infection and brain and spinal fluid leak through the skin.  In some children who have complex anatomical abnormalities at the base of the skull, further operations may be required as the child gets older.

Given we have national expertise in Chiari malformations, we are a common referral center for children who have undergone Chiari operations elsewhere and require a second opinion for possible revision surgery.

Is surgery for Chiari safe?

Yes.  At experienced centers, the risk of a Chiari operation is very low.  Chiari decompression operations tend to be one of the most commonly performed surgeries by pediatric neurosurgeons.

How long is the hospital stay following a Chiari decompression operation?

The operation takes about 3 to 4 hours.  The hospital stay following a Chiari decompression is generally 3 to 4 days.  An experienced pediatric ICU and pediatrics team will ensure that the common postoperative symptoms of headache, neck stiffness, nausea and vomiting are well-controlled.  At home, recovery can take up to two or three weeks, during which we suggest restriction of demanding physical activity.

Are there any long term restrictions for children who undergo a Chiari decompression?

No.  Once the symptoms are relieved, there are generally no restrictions in the long term for children that undergo this operation.   However, it is important to follow-up with the pediatric neurosurgeon until the child reaches adulthood.