What is Cushing’s Syndrome and Disease?

The IPSS test is done in some patients to identify if there is too much ACTH is causing the excess production of cortisol, and where it is coming from.

How do we do an IPSS procedure?

Typically under general anesthesia, we place small tubes (catheters) into the femoral veins (the main vein draining the legs) at the level of the groin. From there, under X-ray guidance, we navigate those catheters to the main veins which drain the Pituitary gland. These are the inferior petrosal sinuses (right and left). We then draw samples from those veins and the main vein of the abdomen and test those samples for ACTH. We also take timed samples after giving a dose of medication which would normally stimulate the production of ACTH to improve the sensitivity of the test.

When we get the results, the different levels of ACTH may help the endocrinologist determine where the tumor is located that is causing the adrenal gland to produce the excess cortisol. If it is from the Pituitary gland, any difference between the right and left samples may help the surgeon determine the surgical plan to remove the tumor yet preserve the normal Pituitary gland.

This example shows elevation of ACTH in the right inferior petrosal sinus, likely indicating a tumor in the right side of the pituitary gland causing Cushing’s Disease.

Picture of contrast injection of the inferior petrosal sinuses: 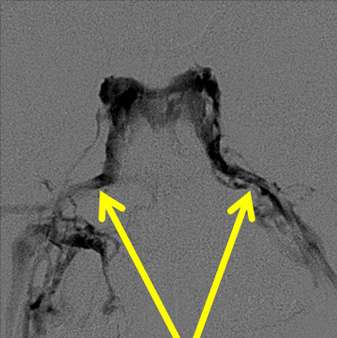 Tips of the catheters in the inferior petrosal sinuses.