What is Hydronephrosis In Children Or Infants?

Overview. Antenatal hydronephrosis, the most common urological problem found during prenatal ultrasound screening, refers to the fluid-filled enlargement of the kidney as a result of obstruction in its output of urine. It is usually detected in the fetus in the first trimester of pregnancy, though it can also be discovered later in the pregnancy or after birth.

It is most commonly caused by narrowing of the ureter (the tube that carries urine from the kidney to the bladder) close to the kidney; blockage in the kidney or bladder; or vesicouretal reflux, in which a faulty valve between the bladder and the ureter causes the urine to back up into the kidney when the bladder fills or empties. In more rare cases, antenatal hydronephrosis can result from a duplication anomaly (two ureters leading from the kidney, one of which may be obstructed) or a multicystic dysplastic (nonfunctional) kidney. 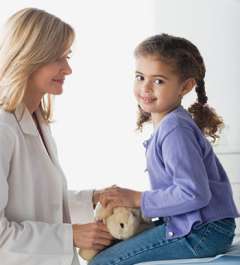 Diagnosis and Management. The initial approach to most cases of antenatal hydronephrosis is to perform regular ultrasound testing to carefully monitor kidney growth and function during the pregnancy, infancy and childhood. Usually, this is all that is necessary. Obstetrical care is generally unchanged, although low-dose antibiotics are sometimes given to prevent infection. After birth, the condition will usually resolve itself with no damage to the kidney; in some instances, the kidney that appears enlarged in the ultrasound is found to function normally after delivery.

Within the first few days after birth, the newborn’s kidneys are evaluated with an ultrasound. If hydronephrosis is still found, other tests are performed. A voiding cystourethrogram, in which a catheter is placed in the bladder, is used to rule out vesicouretal reflux, which is responsible for 25-30 percent of antenatal hydronephrosis cases. If reflux is confirmed as the cause, it can be treated with antibiotics and regular monitoring with ultrasound and voiding cystograms. Most children outgrow the reflux, but in some cases surgery is required. A diuretic renal scan, requiring an IV and a catheter, further evaluates kidney function.

In cases in which obstruction or blockage threatens to severely damage the developing kidney and other organ systems affected by kidney function, a surgical procedure known as a pyeloplasty may prove necessary to correct the blockage. In rare cases, this is done in utero, though the procedure remains experimental.

When the hydronephrosis is found not to be associated with reflux or obstruction, continued monitoring with periodic ultrasounds is generally all that is needed.