01/12/2009
A new national study has shown that nearly 75 percent of patients hospitalized for a heart attack had cholesterol levels that would indicate they were not at high risk for a cardiovascular event, based on current national cholesterol guidelines.
Specifically, these patients had low-density lipoprotein (LDL) cholesterol levels that met current guidelines, and close to half had LDL levels classified in guidelines as optimal (less than 100 mg/dL).
"Almost 75 percent of heart attack patients fell within recommended targets for LDL cholesterol, demonstrating that the current guidelines may not be low enough to cut heart attack risk in most who could benefit," said Dr. Gregg C. Fonarow, Eliot Corday Professor of Cardiovascular Medicine and Science at the David Geffen School of Medicine at UCLA and the study's principal investigator.
While the risk of cardiovascular events increases substantially with LDL levels above 40–60 mg/dL, current national cholesterol guidelines consider LDL levels less than 100–130 mg/dL acceptable for many individuals. The guidelines are thus not effectively identifying the majority of individuals who will develop fatal and non-fatal cardiovascular events, according to the study's authors.
Researchers also found that more than half of patients hospitalized for a heart attack had high-density lipoprotein (HDL) cholesterol levels characterized as poor by the national guidelines.
Published in the January issue of the American Heart Journal, the study suggests that lowering guideline targets for LDL cholesterol for those at risk for cardiovascular disease, as well as developing better treatments to raise HDL cholesterol, may help reduce the number of patients hospitalized for heart attack in the future.
"The study gives us new insight and intervention ideas to help reduce the number of heart attacks," said Fonarow, who is also director of the Ahmanson–UCLA Cardiomyopathy Center.
"This is one of the first studies to address lipid levels in patients hospitalized for a heart attack at hospitals across the entire country."
The research team used the national database sponsored by the American Heart Association's Get with the Guidelines program. The database includes information on patients hospitalized for cardiovascular disease at 541 hospitals across the country.
Researchers analyzed data from 136,905 patients hospitalized for a heart attack nationwide between 2000 and 2006 whose lipid levels upon hospital admission were documented. This accounted for 59 percent of total hospital admissions for heart attack at participating hospitals during the study period.
Among individuals without any prior cardiovascular disease or diabetes, 72.1 percent had admission LDL levels less than 130 mg/dL, which is the current LDL cholesterol target for this population. Thus, the vast majority of individuals having their first heart attack would not have been targeted for effective preventative treatments based on the criteria used in the current guidelines.
The team also found that half of the patients with a history of heart disease had LDL cholesterol levels lower than 100 mg/dL, and 17.6 percent of patients had LDL levels below 70 mg/dL, which are guideline targets for LDL cholesterol in those at fair risk and at high risk for cardiovascular disease, respectively.
The study also showed that HDL cholesterol, or "good cholesterol," levels have dropped in patients hospitalized for heart attack over the past few years, possibly due to increasing rates of obesity, insulin resistance and diabetes.
Researchers found that 54.6 percent of patients had HDL levels below 40 mg/dL. Developing more effective treatments to boost HDL levels may help reduce the number of patients hospitalized for heart attacks, according to the authors.
"We found that less than 2 percent of heart attack patients had both ideal LDL and HDL cholesterol levels, so there is room for improvement," said Fonarow.
Fonarow said that only 59 percent of patients in the database had their lipid levels checked upon admission, which should be increased, since these early measurements can often help guide treatment decisions.
He also noted that only 21 percent of patients in the study were taking lipid-lowering medications before admission, despite almost half having a prior history of cardiovascular events, which would prompt treatment.
The national cholesterol guidelines are set by the National Cholesterol Education Program, part of the National Heart, Lung and Blood Institute of the National Institutes of Health.
The study was sponsored by the Get with the Guidelines program, which is supported by the American Heart Association in part through an unrestricted education grant from the Merck Schering Plough Partnership.
Fonarow has conducted research for GlaxoSmithKline and Pfizer and serves a consultant and has received honorarium from Abbott, AstraZeneca, GlaxoSmithKline, Merck, Pfizer and Schering Plough companies. He is also chair of the Get with the Guidelines steering committee.
Other authors include: Dr. Amit Sachdeva, Department of Medicine, David Geffen School of Medicine at UCLA, Los Angeles, CA; Dr. Christopher P. Cannon, Brigham and Women's Hospital & Harvard Medical School, Boston, MA; Dr. Prakash C. Deedwania, Department of Cardiology, VA Medical Center/UCSF School of Medicine, San Francisco, CA; Dr. Kenneth A. LaBresh, Masspro, Waltham, MA; Dr. Sidney C. Smith, Jr., University of North Carolina School of Medicine, Chapel Hill, NC; David Dai, MS and Dr. Adrian Hernandez, Duke Clinical Research Institute, Durham, NC.
UCLA is California's largest university, with an enrollment of nearly 38,000 undergraduate and graduate students. The UCLA College of Letters and Science and the university's 11 professional schools feature renowned faculty and offer more than 323 degree programs and majors. UCLA is a national and international leader in the breadth and quality of its academic, research, health care, cultural, continuing education and athletic programs. Four alumni and five faculty have been awarded the Nobel Prize.
For more news, visit the UCLA Newsroom. 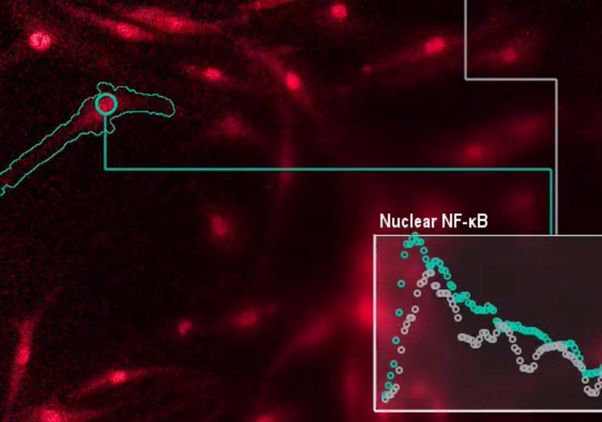 Health and Behavior
UCLA scientists decode the ‘language’ of immune cells
05/12/2021
The advance, researchers say, is like the cellular equivalent of discovering the Rosetta stone and may eventually lead to new treatments for diseases.