New Mutation May be a Major Contributor to Genetic Ataxia

A newly identified genetic mutation is surprisingly common among people with a movement disorder called ataxia, according to a new study. In collaboration with an international team of ataxia researchers, Brent Fogel, MD, PhD, Associate Professor in the Departments of Neurology and Human Genetics at the David Geffen School of Medicine at UCLA, found that 6.8% of ataxia patients carried at least one copy of the mutation, and 3.2% of the patients had two copies.

While 3.2% may not sound like much, it’s a big number when it comes to ataxia genes. “There are roughly 600 different genetic forms of ataxia, and the vast majority of them are in less than 1% of ataxic patients,” said Dr. Fogel.

Undergraduate Dona Aboud Syriani, the paper’s first author, presented the work May 19 as part of the UCLA Undergraduate Research Showcase. The work earned Syriani a nomination for the Dean’s Science Prize, which will be awarded Friday, May 22. The study was published online May 20, 2020, in Neurology® Genetics, an official journal of the American Academy of Neurology.

Ataxia is the medical term for a lack of balance and coordination. People with ataxia have difficulty coordinating their voluntary movements, and struggle to walk without staggering. Ataxia is not a final diagnosis, it’s a symptom, Dr. Fogel points out, and it can often be challenging to determine exactly what is causing the ataxia.

One type of ataxia is known as CANVAS, which stands for “cerebellar ataxia, neuropathy, and vestibular areflexia syndrome.” Patients with CANVAS experience a threefold assault to their balance: the cerebellum is a region of the brain that helps regulate balance and movement; “neuropathy,” or nerve damage, muffles the ability to sense how your body is positioned in space; and the vestibular system in the inner ear acts as a “gyroscope” to help sense up and down.

While it’s defined by this collection of symptoms, the underlying cause of CANVAS was previously unknown. It’s rare, which makes it difficult to find enough patients for a genetic study. UCLA is home to the Ataxia and Neurogenetics Biobank Program, one of the largest ataxia biobanks in the country. Over the course of two decades, the program has collected nearly 2,000 patients with various forms of ataxia or other neurogenetic conditions, making it an invaluable resource for neurogenetic studies. 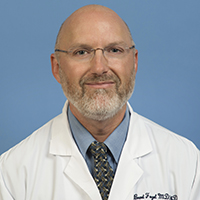 Last year, Dr Fogel teamed up with a research group in Australia who had discovered that disruptions in a gene called RFC1 appear to cause CANVAS. The type of mutation causing the disease is called a “repeat expansion,” which means that a short, repeated section of DNA in the gene gets copied too many times. Rather than just a few repeats of the sequence, as in a normal copy, the afflicted gene may be burdened with hundreds of repeats.

Armed with this new information, Dr. Fogel set out to discover how common this mutation was among patients suffering from undiagnosed ataxia. By testing over 900 patient samples, the researchers uncovered 29 people who carried two expanded copies of RFC1.

“One thing I’ve learned about genetic conditions is that they don’t read the textbooks,” said Dr. Fogel. “They don’t know what they’re supposed to look like.”

Even though the RFC1 mutation was originally identified as a gene for CANVAS, most of the people carrying it had other forms of ataxia, suggesting this should be an early test in patients with suspected genetic ataxia, especially combined with neuropathy and vestibular dysfunction. “Basically, it means you could potentially find this gene causing ataxia in almost anyone,” he said. While there’s no treatment yet, diagnosis is the first step in that direction. Finding that it’s common will boost the number of people getting tested for it, and the number of people studying new therapies and treatments.

The study’s authors also include Dr. Susan Perlman, Darice Wong, and Yuanming Mao of UCLA, as well as researchers from the University of Chicago; Brigham and Women’s Hospital and Harvard Medical School; the University of Melbourne, Australia; and Tel Aviv University, Israel.