UCLA Neurologist Elected to the Association of American Physicians 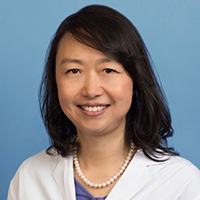 Dr. Ming Guo, Professor of Neurology at the David Geffen School of Medicine at UCLA, was elected to the Association of American Physicians (AAP) at their annual meeting in Chicago, April 3-5.

The AAP is an elected society of physician-scientists, who contribute to clinical medicine through the pursuit of basic science. Those selected “exemplify the pinnacle of pioneering and enduring, impactful contributions to improve health,” according to AAP.

Errors in two genes, called Pink1 and Parkin, contribute to the damage that leads to Parkinson’s disease. Guo’s work revealed that Pink1 and Parkin work together to help maintain the proper function of cellular structures called mitochondria.

The mitochondria earned the nickname the “powerhouse of the cell” because of its role breaking down nutrient molecules and generating energy for the cell. It was a bit surprising to find two genes associated with Parkinson’s disease interacting in the mitochondria, Guo said.

“People didn’t quite understand that,” she recalled, “but genetics doesn’t lie.” Further research eventually revealed that the two genes were part of a much larger pathway that helps detect and repair damage to the mitochondria. The accumulation of cellular damage in the mitochondria can not only lead to Parkinson’s disease, but other aging-related conditions, including heart disease, diabetes, and other neurological disorders. “The impact became much bigger than we initially thought,” Guo said. “Now a lot of people are working on this.”

As a clinician as well as a researcher, Guo seeks not just to understand disease, but to eliminate it. Her lab is probing the question of whether cleaning up mitochondrial damage can lessen the severity of Parkinson’s - or even reverse the aging process. “In essence, aging is due to accumulated damage in mitochondrial DNA,” she said. She’s currently working on ways to remove the damaged DNA and restore healthy cellular function.

Serving in the dual role of physician and scientist, Guo said, helps her perform better in both capacities. “Having both worlds does help me tremendously,” she said. Understanding the scientific basis of disease changes the way she listens to patients, she said, and helps her think more deeply about what may be going on in each case.