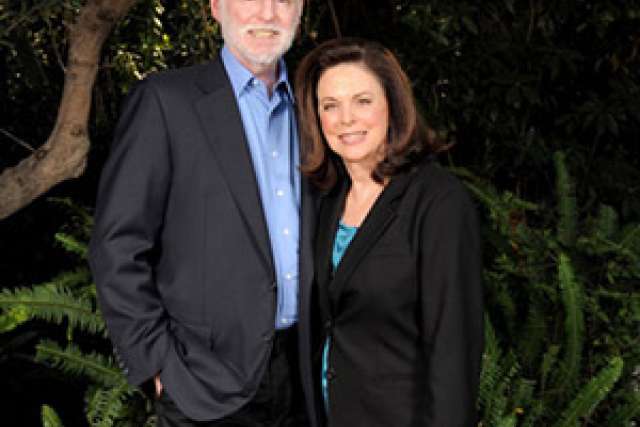 Courtesy of the Goldberg Family

A generous donation from Leonard and Wendy Goldberg will provide resources to help UCLA identify better treatments for migraine.

UCLA Health Sciences has received a $10 million gift, most of which will support multidisciplinary research on migraine, a debilitating neurological disorder that affects 36 million people in the U.S.

The gift was made by philanthropists Wendy and Leonard Goldberg. Wendy Goldberg is an editor and author; her husband, Leonard, is an award-winning film and television producer and executive.

More than 90 percent of sufferers are unable to work during their migraine attacks, costing employers $13 billion a year in lost work days; and every 10 seconds, someone in the U.S. goes to an emergency room with a migraine-related complaint.

“The Goldbergs’ visionary gift, which names and endows the UCLA Goldberg Migraine Program, is the largest from individuals to support migraine research and treatment,” said Dr. John Mazziotta, vice chancellor of UCLA Health Sciences and chief executive officer of UCLA Health. “It will be a complete game changer in the field of headache and migraine – locally and globally.”

According to the World Health Organization, migraine is the third most common medical disorder worldwide. It is closely linked with a variety of other disorders, including chronic pain, stroke and depression. Although it is a major public health issue, migraine has remained largely in the shadows, and attacks are commonly minimized as “just headaches.”

The UCLA Goldberg Migraine Program will be led by Dr. Andrew Charles, professor of neurology in the David Geffen School of Medicine at UCLA and the Meyer and Renee Luskin Chair in Migraine and Headache Studies.

“This remarkable gift will enable our multidisciplinary team to bring forward new therapies, provide the best possible care and improve the lives of those who suffer from migraine,” Charles said.

Migraine is a complex disorder. There is a major genetic component, meaning that children of parents with migraine commonly suffer from the disorder.

“Migraine is generally under-recognized as a major medical problem, in part because it is not fatal,” Charles said. “But it is not hyperbole to say that it can ruin lives.”

Wendy and Leonard Goldberg want to help advance the understanding of migraine and the care of patients with the disorder.

“Leonard and I have seen firsthand in friends and family members how debilitating migraines can be,” Wendy Goldberg said. “We are eager to help find better treatments and, ultimately, a cure.”

The donation is part of the $4.2 billion UCLA Centennial Campaign, which is scheduled to conclude in December 2019 during UCLA’s 100th anniversary year.

Leonard Goldberg is a highly respected film and television executive and producer who has served as head of programming for ABC and president of 20th Century Fox. He is currently the executive producer of the hit CBS series “Blue Bloods.” Goldberg produced a string of beloved television series, including “Charlie's Angels,” “Hart to Hart,” “Starsky and Hutch,” “Fantasy Island,” “Family” and the Emmy-winning television film “Something About Amelia.” He also produced the Oscar-nominated movie “WarGames,” as well as “Sleeping with the Enemy,” “Double Jeopardy” and “Charlie’s Angels.”

Wendy Howard Goldberg’s “Blue Bloods Cookbook,” co-authored with Bridget Moynahan, is currently climbing the bestseller charts. She also co-wrote with Betty Goodwin the highly acclaimed book “Marry Me,” which was the subject of two network television specials, and collaborated on the New York Times and Los Angeles Times bestseller “Hollywood Moms.” Proceeds from the book benefited breast cancer research. Wendy Goldberg currently serves as president emeritus of the California State Summer School Arts Foundation. The summer school, headquartered at Cal Arts and now entering its 30th year of providing arts education to young people ages 13 to 20, is considered one of the finest programs of its kind in the United States.

The Goldbergs have endowed several programs at the University of Pennsylvania, including the student residence Goldberg House, and they established the Wendy and Leonard Goldberg Lectureship at Cedars–Sinai Medical Center. In 2012, the Goldbergs were honored by Cedars–Sinai with the first annual Hollywood Icon Award in recognition of their achievements in film, television and charitable endeavors.