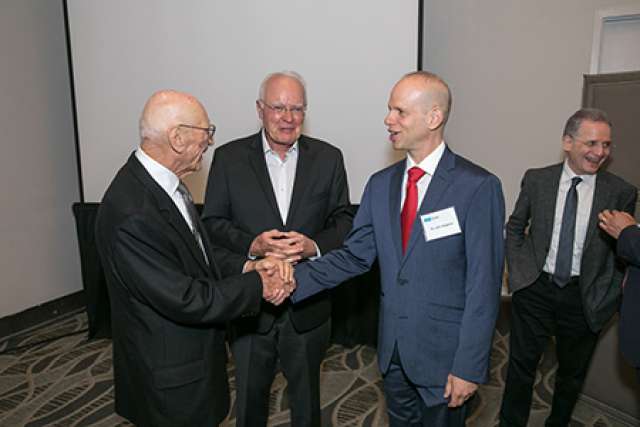 UCLA Health has launched a $20 million fundraising initiative to create a new center for advanced lung disease at the David Geffen School of Medicine at UCLA. To date, the initiative has secured $4.37 million for the Lung Health Research Accelerator Fund, including three gifts of $1 million each from Michael and Linda Keston, William Pierpoint, and Jeffrey and Robin Raich, and a total of $1.37 million from nine other donors.

The fund will support the work of Dr. John Belperio and Dr. Joseph Lynch III in the medical school’s division of pulmonary and critical care medicine. Belperio's research is focused on identifying the causes of and potential treatments for transplant rejection and advanced lung diseases, including chronic obstructive pulmonary disease, emphysema, idiopathic pulmonary fibrosis, sarcoidosis and interstitial lung disease.

Because of the overlap among those conditions, discoveries related to one disease could help lead to advances in understanding and treating the others.

"Existing treatments for advanced lung diseases are unimpressive and leave patients with one option — lung transplantation," said Belperio, who holds the Guitiara Pierpoint Endowed Chair in Interstitial Pulmonary Fibrosis. "Unfortunately, transplantation is not a cure, with only half of lung transplant recipients surviving five years."

"Our patients deserve better. We need novel treatments that improve patients' quality of life and ultimately support their survival. Our laboratory is committed to seeing this happen, and preliminary results are extremely promising."

Belperio's laboratory, which will soon move into a renovated space with new equipment provided by the fund, has made significant strides in combatting lung disease, which affects millions of people worldwide and is a leading cause of death. Over the past decade, he and his team have discovered that fungal growth in the airways can lead to chronic transplant rejection, which led doctors to begin treating post-transplantation patients with antifungal medication.

The lab also has explored the role of various proteins in transplant rejection, discovered a less invasive method for testing transplant patients with acute rejection, and published a guide to help other research centers create patient registries and collections of biological specimens for idiopathic pulmonary fibrosis.

Each of the lead donors has a personal connection to the research. Michael Keston, the former chairman and CEO of KFG Investment Company, had pulmonary fibrosis and received a lung transplant at UCLA in 2009 under Lynch's care. Keston passed away in February 2019, but previous seven-figure gifts made with his wife, Linda, in 2010 and 2015, supported UCLA research on pulmonary fibrosis and transplant rejection, furthering the couple's legacy of philanthropy for medical research and other causes. Keston's leadership was critical to securing the latest gifts and to recent progress in transplant rejection research.

"The impact of my husband's philanthropy and leadership on lung transplant research at UCLA will be felt for many years to come," Linda Keston said. "He would be pleased to see his legacy continuing on through improved treatments and therapies."

A gift from private investor William Pierpoint and his late wife, Guitiara, established the endowed chair now held by Belperio after he treated Guitiara from 2007 to 2012 for idiopathic pulmonary fibrosis and following a lung transplant. Although she died in 2012 of complications from the transplant, William Pierpoint is hopeful that the new funds will enable Belperio to find a cure for idiopathic pulmonary fibrosis and lung transplant rejection.

"When you lose someone, you just can't walk away and forget about it," Pierpoint said. "For me and a lot of other people, this is an emotional gift."

Jeffrey Raich came to Belperio in 2010 after visiting specialists all over the country who were unable to properly diagnose him. Belperio treated Raich for pulmonary sarcoidosis, a condition that causes lung inflammation and end-stage fibrosis when not managed properly. The Raiches made a previous philanthropic gift to support Belperio's research in 2012.

"After seeing multiple specialists who provided a grim prognosis, I was referred to Dr. Belperio and his team. They saved my life," said Raich, who is co-president and co-founder of global investment bank Moelis and Company. "My giving is inspired not only by my immense gratitude but also by the knowledge that philanthropy has the power to transform care for these devastating lung diseases."

The gifts are part of the Centennial Campaign for UCLA, which is scheduled to conclude on Dec. 31. Visit the Give to UCLA website to contribute to the Lung Health Research Accelerator Endowed Fund.