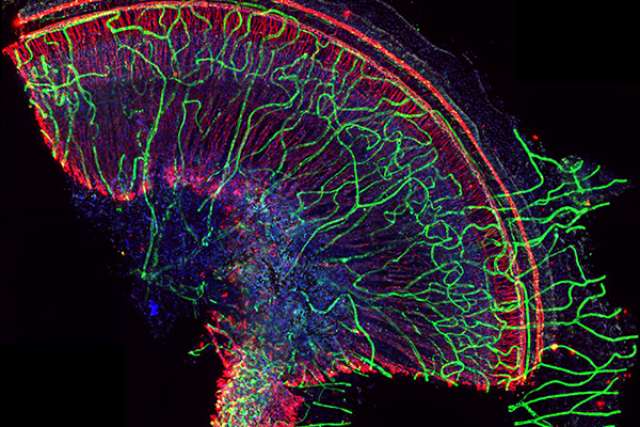 The Eli and Edythe Broad Center of Regenerative Medicine and Stem Cell Research at UCLA recently named the winners of its 2019 UCLA-wide light microscopy image and video contest.

The images and videos were chosen by a panel of scientists, microscopists and science communicators for their exceptional structure, color, composition, informational content, innovation, technical difficulty and visual impact.

The five award categories are:

This image is by Jorge Martin, a staff research associate in the lab of Dr. Deborah Krakow.

Martin captured and assembled more than 1,000 images to create a 10-micron-thick section of a healthy human finger. Cartilage (light blue) is seen on the ends of each bone (dark blue), which is filled with bone marrow (dark purple). This image showing the structure and cellular organization of a healthy finger is being used to compare the changes that certain genetic mutations have on the formation of human fingers. This research is part of the UCLA International Skeletal Dysplasia Registry, which classifies skeletal disorders radiographically, histologically and genetically in order to identify the genes involved in skeletal dysplasias. Scientists hope this will ultimately help them develop new therapies to improve patient care.

This image is by Amelia Hartenstein, lab manager for Dr. Volker Hartenstein.

Transcription factors are proteins that turn genes on or off by binding to nearby DNA. In this image of a developing fruit fly embryo, a transcription factor called Ventral nerve cord defective, or Vnd, which controls cell growth, is seen in red. The adhesion molecule, N-cadherin, required for the formation of precise patterns of connections in the brain, is seen in blue. The expression of another adhesion molecule, Neurotactin, which is involved in the process by which cells interact, is seen in green. This image is part of a project to characterize the expression patterns of more than 120 transcription factors that play a role in the development of the cells that make up the fruit fly nervous system. Understanding the molecular basis of nervous system development in the fruit fly will shed light on how this process occurs in humans, an advance that could improve the diagnosis and treatment of neurological diseases.

This image is by Soizic Riche, a postdoctoral fellow in the lab of Samantha Butler.

In this image, the protein cofilin (blue) can be seen in the developing embryonic mouse spinal cord. Cofilin plays a key role in the process by which developing nerves extend thread-like projections called axons over long distances to form neural networks throughout the body. A better understanding of this process could lead to the creation of treatments that reduce the time it takes for people to recover from peripheral nerve injuries.

The winning image, which was selected by attendees of the center’s 16th annual stem cell symposium, is by Christina Termini, a postdoctoral fellow in the lab of Dr. John Chute.

Radiation therapy negatively alters the microenvironment in which adult blood stem cells reside. The Chute lab has shown that after total body irradiation, endothelial cells (red), which line the blood vessels, and stromal cells (white), which make up the connective tissue, contribute distinct amounts of the stem cell regenerative factor pleiotrophin (green). This factor aids in the recovery of the blood and immune system. A better understanding of the cells and mechanisms that control blood stem cell recovery will pave the way for methods to generate blood stem cells to fight disease or regenerate them after injury.

Sponsored by Zeiss and awarded to an image created using one of its instruments, the award goes to an image by postdoctoral fellow Sarah Robertson and undergraduate researcher Johnson Thai, both from the lab of Dr. Sophie Deng.

The cornea is the transparent front part of the eye that covers the iris and pupil. When the middle layer of the cornea, the cornea stroma, is wounded, the healing process often causes corneal scars that lead to vision impairment. A corneal scratch is seen here (in black) at the center of the image. Collagen 1 (in green), a key player in wound healing, can be seen surrounding the nuclei of cells closest to the scratch.

The Deng lab studies the proteins that are involved in corneal stroma wound healing. They replicate the cellular processes that occur following corneal injury by growing corneal stroma fibroblasts in lab dishes and then scratching them to induce a wound. These studies are being done to inform the development of methods to regenerate the cornea following injury.

Principal investigator Ivan Lopez submitted the winning image for this prize, sponsored by Leica and awarded for work created with one of its instruments.

This image shows the mid-portion of the human cochlea, the spiral cavity of the inner ear. The small blood vessels, or microvasculature, (green) are seen running throughout the spiral lamina, which is the bony shelf that projects from the core of the cochlea into the cochlear canal. Nerve fibers are seen in red while cell nuclei are in blue. The Lopez lab utilizes images like this to study how the blood vessels and nerve fibers of the human internal ear change with age. These images can potentially help scientists find ways to combat age-related hearing loss.

This video is by Yasuko Inaba, a postdoctoral fellow in the lab of Alvaro Sagasti.

Inaba created a video that shows how actin labyrinth structures, ridges formed by a protein called actin, are disassembled and quickly reassembled during cell division in zebrafish skin cells. Actin labyrinth structures are suspected of playing a role in the retention of mucus, a slimy secreted substance that protects and moistens surfaces. A better understanding of how these structures retain mucus could shed light on the causes of and potential treatments for certain dry eye diseases.

This video is by Matthew Lowe, a graduate student in the lab of Amander Clark.

A "reconstituted ovary" is produced by combining embryonic mouse ovarian tissue with lab-generated, germ-cell-like mouse cells; germ cells have the ability to become eggs or sperm. This generates an environment that supports the development of oocytes, which are the cells in the ovary that can create an egg and then an embryo, if fertilized. The developing oocytes (teal) can be seen in supportive nests of granulosa cells (red). This technique can be used to explore causes of infertility or potentially provide a new avenue for researching methods to treat infertility by generating oocytes from patient-derived tissue.

The 2019 contest was made possible by a collaboration of microscopy cores across the UCLA campus, including the Broad Stem Cell Research Center-Department of Molecular, Cell, and Developmental Biology Microscopy Core; the California NanoSystems Institute Advanced Light Microscopy and Spectroscopy Laboratory; and the Stein Eye Institute Microscopy Core.