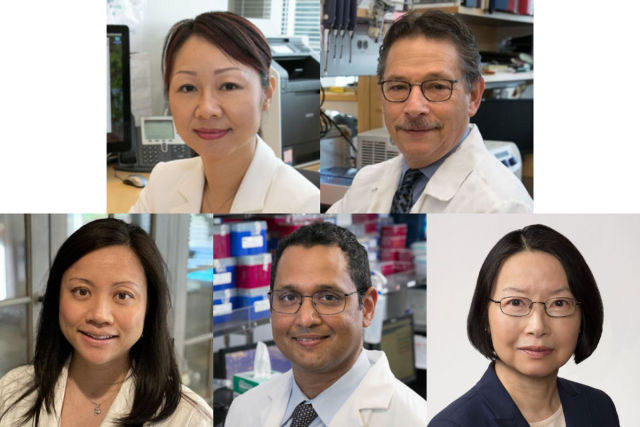 Researchers at the Eli and Edythe Broad Center of Regenerative Medicine and Stem Cell Research at UCLA have received more than $6.8 million in grants from the California Institute for Regenerative Medicine, the state’s stem cell agency, to help develop new stem cell-based technologies to improve patient care.

Lili Yang’s award of $1.4 million will fund her efforts to develop stem cell-engineered off-the-shelf chimeric antigen receptor-invariant natural killer T cells, or CAR-iNKT cells, to treat ovarian cancer, which accounts for more deaths than any other cancer of the female reproductive system. She aims to produce CAR-iNKT cells that target mesothelin, a protein that is found in high levels on the surface of ovarian cancer cells. The proposed immunotherapy builds on Yang’s work to generate blood stem cell-derived CAR-iNKT cells to target multiple myeloma, a project that received funding from CIRM in 2021. Yang will collaborate on this project with Dr. Sanaz Memarzadeh, a UCLA physician-scientist who specializes in ovarian cancer treatment.

Kohn’s $1.3 million award will support his research to develop a blood stem cell gene therapy to treat severe alpha thalassemia, an inherited blood disorder that causes a patient’s body to make less hemoglobin than normal. Hemoglobin carries oxygen to all parts of the body, so severe alpha thalassemia could lead to fetal death or a lifelong need for blood transfusions. If there is a team capable of creating an ex vivo gene therapy treatment for alpha thalassemia and bringing it to a clinical trial, this is the team, CIRM reviewers said.

Kuo’s $1.4 million award will support her work to develop a novel gene therapy to treat dedicator of cytokinesis 8 deficiency, or DOCK8 deficiency, a rare genetic disorder of the immune system characterized by frequent infections of the skin and respiratory system. Those with DOCK8 deficiency are currently treated with stem cell transplants from a matched donor, but the procedures carry risk of graft versus host disease, a condition in which transplanted cells attack the recipient’s body. If shown to be safe and effective, Kuo’s proposal to genetically modify a patient’s own blood stem cells to restore DOCK8 production could shift the paradigm by which patients with this condition are treated.

Rao’s award of $1.4 million will fund his work to develop and optimize novel drugs that attack blood cancer stem cells. Blood cancer stem cells are drug resistant and have the ability to self-renew—properties that cause cancer relapse. Rao will test several thousand chemical compounds for their ability to interfere with the function of a protein called IGF2BP3, which is essential to blood cancer stem cells’ survival and proliferation. Next, he and his team will analyze the chemistry of the compounds found to be most effective, and use this knowledge to design better versions of these compounds. “The ultimate goal of this work is to improve survival and quality of life in patients with blood cancers by making these novel therapeutics,” Rao said. “We are also excited by future possibilities to extend this method to other cancer types because the approach is so different from other therapies currently in development.”

Xian-Jie Yang’s $1.3 million award will support her work to develop a gene therapy for dominant optic atrophy, an inherited optic nerve disease caused by mutations in the OPA1 gene. Patients experience gradual loss of vision starting from childhood. There is a shortage of human retinal cells to test new therapeutic treatments for blinding eye diseases, but Yang plans to overcome this limitation by growing mini human retinas in a dish from stem cells. The mini retinas with OPA1 mutations will be used to test the effectiveness of the new gene therapy, which is intended to work by adding DNA containing a functional version of OPA1 to the cell to override the faulty gene with the healthy copy.