A cool way to say thanks 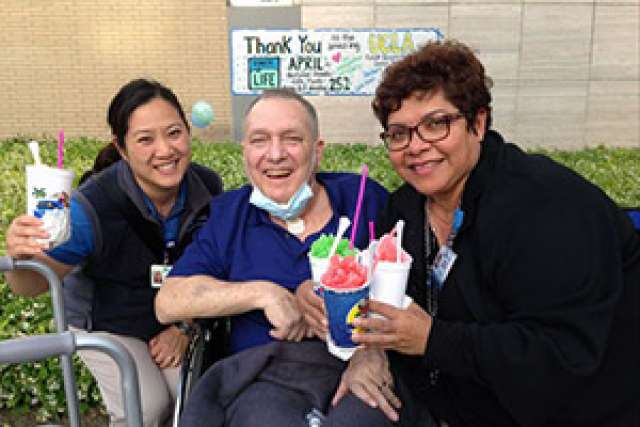 Jim Weingarten, who received a double-lung transplant at Reagan UCLA Medical Center, is flanked by Shirley Tse-Wachs, his physical therapist, and Martha Mansoor, a staffer from the Medical Intensive Care Unit.

To express their gratitude for their help, Jim Weingarten and his family decided to call in a shaved-ice truck to give staffers from the Ronald Reagan UCLA Medical Center a cool treat Wednesday. Just two days before, Weingarten, 64, of Diamond Bar was in the hospital, recovering from a double lung transplant that saved his life.

Weingarten was suffering from an incurable lung disease, called idiopathic pulmonary fibrosis, which turns the lungs into scar tissue. For four years, he was tethered to an oxygen tank to help him breathe and has been on the transplant list for the past year. On March 7, he was admitted to Reagan UCLA Medical Center with severe respiratory failure due to a respiratory syncytial virus, which caused pneumonia.

His prognosis looked uncertain and eventually he was placed on a life support system called extra corporal membrane oxygenation. Then, earlier this month, an offer for a pair of donor lungs came through and he underwent a successful double-lung transplant. His doctor called his survival an “amazing save.”

During his almost two-month hospitalization, Weingarten was not able to eat much solid food and craved crushed ice with lime flavoring. So when the family was trying to think of a small way to show their gratitude to all the of doctors, nurses, care team, transplant coordinators, the lift team, housekeeping and others who played a role in saving his life, they decided a free shaved ice treat was the least they could do.

For others who purchased a shaved ice, 25 percent of the sales went to Donate Life. Roughly $500 was raised for the organization.