A picture of health 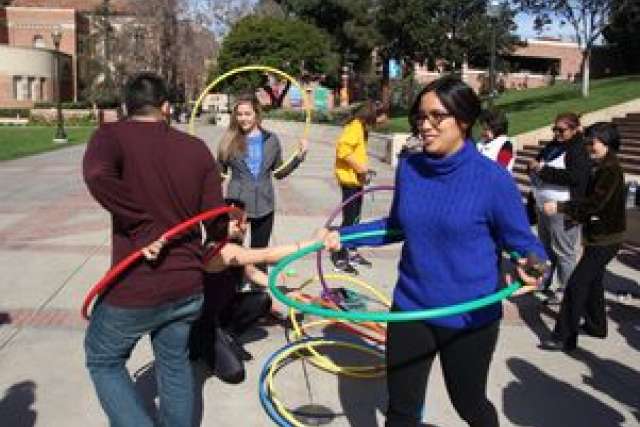 When Jane Semel was 23 and sick in a hospital, she recalled, “a doctor came into my room and said, ‘Something in your life is making you unhappy, and you need to get rid of it. We will help with medication.’

“I did end an unhealthy relationship,” she said, “but the drugs made me sick. Another doctor told me to stop the drugs and stay on a healthy diet for 18 months to heal my body. It worked. I was happy to be well again and felt so lucky that these brilliant, evolved doctors had come into my life. I now believe that a healthy body and a healthy mind are key to a healthy, longer life.”

Today, many years later, Semel is reaching thousands with that message. It is her vision that is behind UCLA’s Healthy Campus Initiative (HCI), which is funded by the Semel Foundation. Officially launched in January 2013, the HCI is a campuswide effort to improve the well-being of students, staff and faculty and make UCLA an environment that encourages a healthy lifestyle.

It was Semel’s husband, Terry, who — knowing that she wanted to influence others to develop healthy habits — proposed that she start with the UCLA community. “Prove that it works in one university,” he said, “and others will follow.”

So the initiative’s goal is simple: to make UCLA the healthiest campus in the nation, a model of well-being. Five pods — Eat Well, Move Well, Breathe Well, Mind Well and Be Well — support one another and collaborate closely. Information on programs, courses and events within each pod can be found at www.healthy.ucla.edu.

Pediatrician Wendy Slusser, who is the associate vice provost over the HCI and who previously headed the Eat Well pod, said the initiative’s strategy is to “make the healthy choice the easy choice. It is building on the strengths of our UCLA community.”

The initiative has gained broad campus buy-in. Slusser said the engagement reaches into multiple disciplines, with more than 60 faculty members and administrators interested in helping to develop food studies curricula. Heading up the HCI pods are faculty from public health, life sciences, the arts and medicine, along with senior directors from the library, recreation and campus life.

HCI’s influence is already being felt beyond campus too. Representatives of the initiative have made presentations at national and UC systemwide meetings and offered webinars to 90 colleges and universities.

HCI’s food-focused pod has a large following. Most campus eateries now offer varied healthy choices, and Bruin Plate — among the nation’s first health-themed dining halls — feeds 3,000 to 4,000 people a day. More than a third of campus vending machines now offer healthful foods, such as trail mix, nuts and air-popped snacks, at eye level and above to catch the attention of hungry shoppers. “The machines with healthy options are just as successful as the ones with all the junky food,” Semel said with pride. “We learned that a lot of people don’t decide what they’re going to buy until they get to the machine. That was huge.”

The campus is also home to several edible gardens. An organic garden grows at the Sunset Canyon Recreation Center, where there are even plans to grow vegetables between the aisles of the amphitheater there. “We want to encourage students to plant vegetables wherever they can,” said Semel, who helped elementary school students plant a medicinal herb garden outside the Ronald Reagan UCLA Medical Center. “Some of them had never touched dirt or watched plants grow. We planted herbs from different cultures and herbs connected with cancer drugs. After all, medicinal herbs were all doctors had as recently as the late 1800s.”

Also at the medical center is a tranquility garden that Semel said “helps with anxiety and insomnia.” Another herb garden grows at the David Geffen School of Medicine, and yet another is planned for the Mildred E. Mathias Botanical Garden.

This pod is not just about exercise. Its goal is to “broaden the impact of being active in different ways, both within and beyond UCLA Recreation, where many of the pod’s programs originate,” said Angelia Leung, who is the academic director of the pod and chair of the Department of World Arts and Cultures/Dance (WACD). In planning and overseeing the pod, she partners with Mick Deluca, executive director of Recreation and Campus Life.

Besides organized classes and team sports, the pod’s physical fitness programs include Instant Recess and Fit Breaks, which are short periods of activity at various campus locations throughout the day. FITWELL offers free worksite wellness classes, and the student-led FITTED encourages exercise participation by underrepresented groups.

In addition, organizers of meetings lasting 90 minutes or longer are encouraged to include five-minute stretch breaks and to promote healthy eating habits through guidelines developed with Eat Well. The Bruin Health Improvement Program provides no-cost intensive lifestyle training for faculty and staff. Those who like to walk can choose from 14 campus walking groups per week, even a stairwell-climbing program.

The pod’s programs embrace a broad view of wellness that includes arts-based events sponsored by the HCI and the UCLA Art and Global Health Center to foster positive dialogues, decision-making and attitudes toward sexual health. A new WACD course titled “Action Conversations” will focus on healthy conversations with students around topics of sexual abuse and gender identity.

On Earth Day 2013, UCLA banned all tobacco products on any property wholly owned or leased by the university. Dr. Michael Ong, an associate professor in the Department of Internal Medicine, heads the Breathe Well pod. Based on the reduction in cigarette litter on campus, he says the ban has been “really successful, although we are still working toward 100 percent compliance.” The prohibition is mostly self-enforcing. “Not smoking has become the new normal; the expectation is that people don’t smoke,” Ong said. But the ban empowers nonsmokers to tell smokers it’s not OK. He said research shows that about two-thirds of smokers want to quit, and the ban and the social stigma encourage them to do so.

“Our intention is to create a mindful, compassionate campus that is truly unified,” Jane Semel said of the Mind Well pod in particular. Led by Robert Bilder, a psychology professor affiliated with the Semel Institute of Neuroscience and Human Behavior (which the Semels endowed), this pod coordinates mindful awareness programs across campus, plus about 30 Fiat Lux courses related to topics of the mind. It also provides scientific analysis of popular well-being apps, ferreting out what Bilder calls the “snake-oil factor.”

In addition, at the Semel Institute’s Brain Gym — which provides demonstrations of tools for cognitive exercise, neurofeedback, and sleep and stress monitoring and management — individuals can book an appointment with a brain fitness personal trainer. Other Mind Well projects include studies of the effect of light on sleep and research on the relationship of martial arts to innovation in collaboration with Move Well. In the UCLA Lab School, a pilot mindfulness program is under way that may possibly be extended to the Los Angeles Unified School District.

The fifth pod focuses on structural changes that lead to more healthful behaviors, such as making the campus safer overall as well as more friendly to pedestrians and cyclists. Dr. Richard Jackson, a pediatrician who chairs the Fielding School’s Department of Environmental Health Sciences, heads the Be Well pod. Grad student Tyler Watson, who works with Jackson, said they coordinate closely with the UCLA departments of Recreation and Transportation, as well as the campus architect and police department (on issues such as enforcement of speed limits and traffic laws).

The green bike lanes on campus and the arrows indicating shared lanes (“sharrows”) for bikes and cars are among the Be Well improvements. UCLA also has the nation’s first campus bike counter, which tallies the number of cyclists who enter via Strathmore Place. Within the Wooden Center is a bike shop that offers low-cost and DIY repairs and quarterly bike rentals, which always sell out. And some elevator doors now sport signs encouraging use of the stairs instead.

The Healthy Campus Initiative has funded 33 student projects, including one aimed at helping off-campus students create healthful, affordable meals; a conference to introduce students to integrative medicine; and the Bicycle Coalition at UCLA, which encourages biking and bike safety.

Meanwhile, no one remains a more committed champion of a healthy campus, or a more ardent role model for integrating healthful habits into your lifestyle, than Jane Semel. When she meets with a campus administrator, she suggests they flee offices and conference rooms and sit in a garden or take a stroll around campus as they talk.

“I cannot tell you,” she said, “how impressed I am with the team of people across the campus who have joined together and who passionately believe in this. I do think people are more aware now of their health and how it changes your life.”

This story has been adapted from the original in UCLA Magazine’s October 2014 edition.