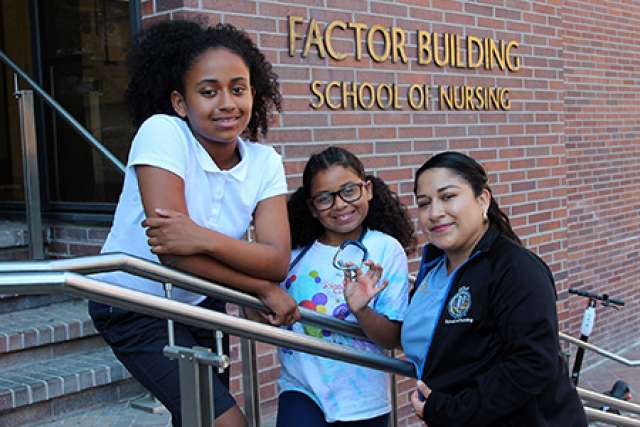 Standing before the Factor Building at UCLA, Jessica Chavez has finally arrived. Though the 14 story brown building is unchanged, Chavez briefly sees herself 17 years younger, gaping at the same arching entrance.

But soon Chavez shakes from these memories of being a 12-year-old girl from a poor neighborhood setting foot in a foreign world — like the campus in Westwood felt back then — and she walks through the doors as a proud enrolled student at the UCLA School of Nursing.

Seventeen summers earlier, Chavez first came to campus as part of the UCLA School of Nursing's adopt-a-school program. Founded in 1992, following the Los Angeles Riots, the program was a key part of UCLA's campus-wide initiative to encourage students from underserved communities to pursue higher education.

Rhonda Flenoy-Younger, then-director of admissions at the nursing school who just recently retired, volunteered to help start what became a 20- year partnership with Bethune Middle School in South Los Angeles. Every summer, seventh graders were brought the 17 miles to UCLA to learn about career paths in nursing, and more importantly, to begin being able to picture themselves going to college.

In the neighborhood where Chavez grew up, the average household income falls below the federal poverty line. And like in so many poor neighborhoods in the United States, poverty was accompanied by crime.

"Even in middle school, there was a lot of gang recruitment, gang violence, teen pregnancy," Chavez said.

Chavez's parents, who immigrated from El Salvador to flee the civil war, saw the frequent outbursts of crime and violence in their new American home as more tolerable compared to the violence that plagued their home country.

"They just figured that this was much better," Chavez said, "and really didn't know what's the norm."

Chavez vividly recalls sitting in homeroom in seventh grade, when two representatives from the UCLA School of Nursing made a presentation about a summer program on campus and gave everyone some forms to fill out if they were interested. The idea of riding the bus every day and getting free food had Chavez thinking, "why not?"

"I gave the forms to my mom, but she was like, 'I won't be able to drop you off from school, or pick you up' because she was working," Chavez said.

But she was determined to attend and so throughout the summer after seventh grade, Chavez walked eight blocks alone every morning to catch the bus to participate in the program.

The program showed students career options and pathways in nursing, such as working in a hospital or clinic or doing research. Faculty and staff from the nursing school volunteered to mentor the students, and the students in the program could choose to intern and help with tasks in their mentor’s offices. It also included tours of UCLA, health career workshops, computer training, and discussions with minority students from the schools of nursing, public health and medicine.

In addition to providing career advisement, the adopt-a-school program gave the Bethune students something positive to do during the summer months. The program paid for both the students' transportation to and from UCLA and their lunches every day.

After she finished the adopt-a-school program, Chavez remained surrounded by gang activity in her neighborhood throughout high school.

"I was 13 when I witnessed losing a family friend to gang violence and over the years I became desensitized to it." Chavez said. "Along with men, many of the women I grew up with have either been or are currently incarcerated."

Living with that kind of violence and trauma every day took its toll.

"I gave my parents a hard time. I was always ditching school," Jessica said, "They never really saw college as an option for me."

Meanwhile, Chavez felt like her school did little to encourage students to pursue higher education.

"There's a lack of exposure" she said. "In high school, they didn't talk very much about college. It was tough to navigate. I didn't really have the desire to even be in school."

After high school graduation, Chavez got a job and had two daughters, which was a wake up call.

"After I had kids at the age of 19 and 21, then I was like OK, I really need to find a way to provide and take care of them," Chavez said.

When her second child was 7 months old, she enrolled in a certified nurse assistant program and worked at skilled nursing facilities. She also reconnected with Flenoy-Young, who told her about a master's nursing program at UCLA for individuals who already had a bachelor's in another subject.

"So I enrolled in the prerequisites." Chavez said. "It was hard, because I was being a mom at the same time and working 40 hours a week."

Chavez enrolled in a public health program at Cal State Los Angeles. During the day, Chavez worked as a bartender and took classes in the evenings. Once the prerequisites were completed, she applied to UCLA.

Chavez received her acceptance letter to UCLA in 2018, 17 summers after coming to campus for the Bethune program. She is already the first woman in her family to earn a college degree and when she graduates from nursing school will be the first person in her family to receive a master's degree, and the first nurse in the family.

"It's a lot of proud moments," Chavez said. "It's been great so far to know you can do what you think you can't because of your circumstances. This is something that I really wanted, not just to be a nurse, but to be a student at UCLA."

Chavez brings her children to campus frequently to expose them to opportunities. She takes them to the Little Bruin club, and sometimes asks to let them sit in on lectures.