Alumnus reunites with UCLA Rec staffers who saved his life 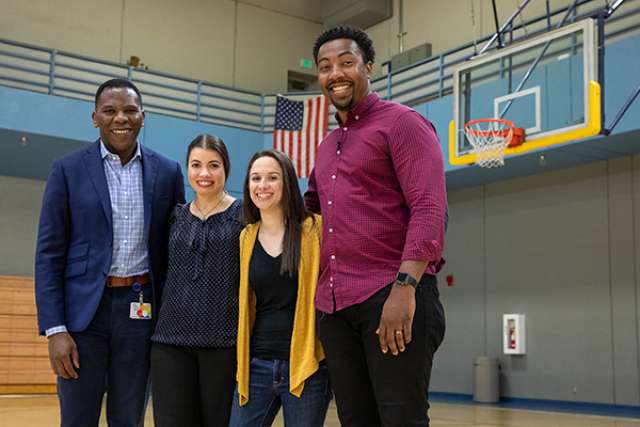 Dr. Olujimi Ajijola, left, with Edward Jean-Louis and Christine Frye and Emily Duncan, who performed CPR on Jean-Louis after he collapsed on the basketball court in 2016.
February 27, 2020
Estimated read time: 2 minutes

When Edward Jean-Louis was a graduate student at the UCLA Anderson School of Management, he often played basketball to re-energize himself and unwind from studying. Having played basketball his entire life, he felt at home on the court. He never imagined that it would also be the place where he would almost die.

But in 2016, when Jean-Louis was playing basketball with a friend at UCLA's John Wooden Center, he began to feel lightheaded and abruptly dropped to the ground. He had experienced sudden death syndrome, an often-fatal heart condition that occurs with no warning signs or symptoms when the heart's electrical system is not working properly.

Jean-Louis, now 31 and an entrepreneur, survived because two student workers and a member of the recreation center staff grabbed an external defibrillator and performed CPR on him. But Jean-Louis never got the chance to meet and thank his saviors until recently.

This month, he shared a heartwarming reunion on the same basketball court where he had collapsed with two of them — Emily Duncan, who was a UCLA student worker in 2016, and Christine Frye, who was a staff member at the Wooden Center. (Brandon Brown, the other student who helped revive Jean-Louis, was unable to attend the reunion.) Joining them was Dr. Olujimi Ajijola, the cardiologist at UCLA Health who treated Jean-Louis after the incident.

"I know the story doesn’t end this way for most people," Jean-Louis said. "I am so grateful to have had a second chance at life."

According to the American Heart Association, more than 200,000 Americans die unexpectedly due to sudden death syndrome, the leading cause of death in young athletes.

"Most patients who have sudden death syndrome do not survive," Ajijola said. "If it weren't for the bystanders who acted quickly, there could have been a very different outcome."

Jean-Louis now has an implanted defibrillator that can shock his heart back to a normal rhythm if he has another life-threatening arrhythmia — the condition in which the heart beats too fast, too slow or irregularly.