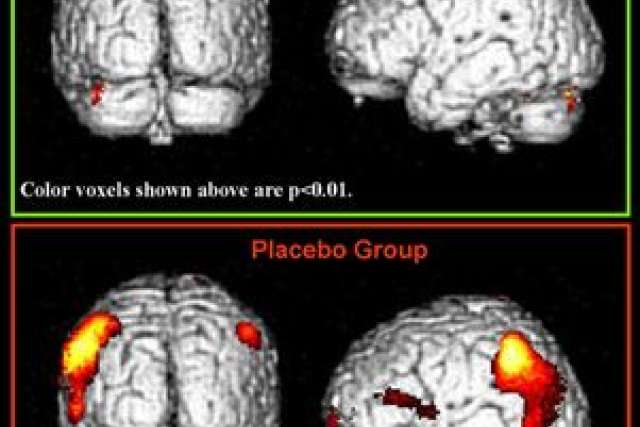 FINDINGS:
UCLA researchers conducted a study of a small sample of adults with mild age-related memory loss. One group of participants was randomly assigned a daily placebo, while the other group was given Aricept, a drug used to treat Alzheimer's symptoms. Both groups underwent PET brain scans before and after the 18-month treatment. The researchers found that the brains of people given Aricept showed an increased rate of metabolism and looked more normal than the brains of those given the placebo. Both groups scored the same on memory tests, however, implying that PET scans may be more sensitive than neuropsychological tests in detecting the effects of drugs.

IMPACT:
The research suggests that the treatment of early symptoms of memory loss may protect the brain and help people with mild age-related memory impairment. The finding also shows how PET offers researchers a tool for tracking the effectiveness of drugs prescribed to treat age-related cognitive decline.

AUTHORS:
Dr. Gary Small, UCLA's Parlow-Solomon Professor on Aging and professor of clinical psychiatry at the Semel Institute for Neuroscience and Human Behavior at UCLA, and Dr. Daniel Silverman, UCLA associate clinical professor of molecular and medical pharmacology and head of neuronuclear imaging, are available for interviews.

FUNDING:
The study was funded by grants from the National Institute on Aging and private foundations. Small is a consultant to Pfizer and Eisai, which manufacture and market Aricept, and to Siemens, which manufactures and markets PET brain scanners. No commercial funding was provided.

CONFERENCE:
The findings will be presented at 1:30 p.m. ET on July 30 at the "Hot Topics" poster session of the 2008 International Conference on Alzheimer's Disease in Chicago, hosted by the Alzheimer's Association.

GRAPHICS:
Color PET scans revealing the different rates of patients' brain metabolism before and after treatment are available upon request.